Boris Johnson has said the long-feared second wave of the pandemic has arrived in the UK, with new cases of coronavirus in England estimated to have doubled over the past week.

The prime minister said he does not want to put the country in another national lockdown but warned the government may need to “intensify things to help bring the rate of infections down”.

“We’re now seeing a second wave coming in… clearly we are going to keep everything under review,” he said.

He said he did “not want to get to a second national lockdown at all” but as the disease progresses, “of course we’re going to have to take further measures”. 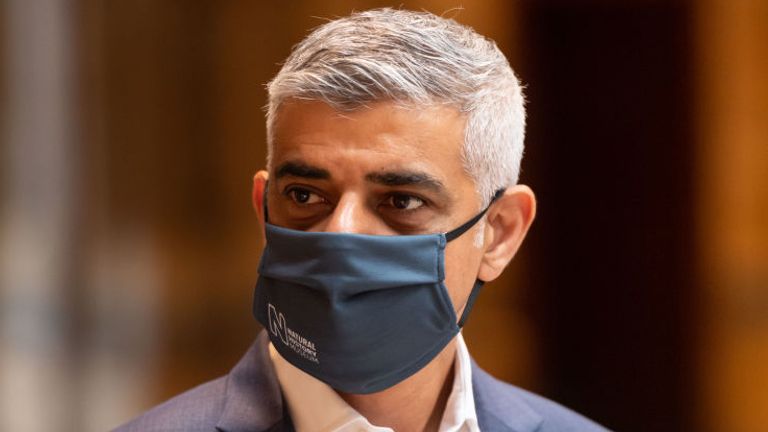 Meanwhile, the mayor of London, Sadiq Khan, has insisted there should be no delays, saying: “I am of the firm view that we should not wait, as happened six months ago, for this virus to again spiral out of control before taking action.”

He said the capital is “increasingly likely” to be subject to further lockdown restrictions.

“The best thing for both public health and the economy is new restrictions imposed early, rather than a full lockdown when it’s too late – but the government must urgently ensure there is a fully functioning testing system,” he said.

“I strongly urge all Londoners to be as cautious as possible over this weekend. Please think very carefully about your actions – strictly follow social distancing rules, regularly wash your hands and wear a face covering to help reduce the spread of the virus.”

Their comments came as new confirmed daily cases of coronavirus hit 4,322 – the highest since 8 May – and another 27 deaths were recorded. The R number, which shows the spread of the virus, is now between 1.1 and 1.4.

With COVID-19 cases now doubling every seven to eight days, the government is looking at introducing nationwide restrictions for a short period to try to “short-circuit” the virus and slow the spread of the disease.

Huge swathes of the North West, West Yorkshire, the Midlands and the North East have been placed under further localised coronavirus restrictions.

Government figures have stressed the plans being drawn up stop short of a full national lockdown, as seen in the spring, when the country was told to stay at home.

Proposals being worked up for such a “circuit break” could see essential travel to schools and workplaces continuing, but restaurants and bars would shut – or perhaps run on restricted hours – and different households would be asked not to mix at all.

The restrictions could be put in place for two weeks, but the timing and duration of the measures has yet to be finalised. There has been speculation of such a lockdown taking place around the time of school half-term in October.

Mr Johnson’s message to parents and teachers was: “We want to keep the schools open… as far as we possibly can.” 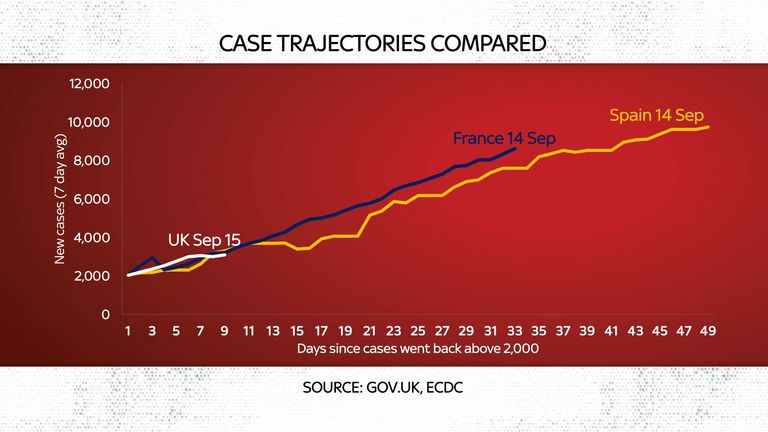 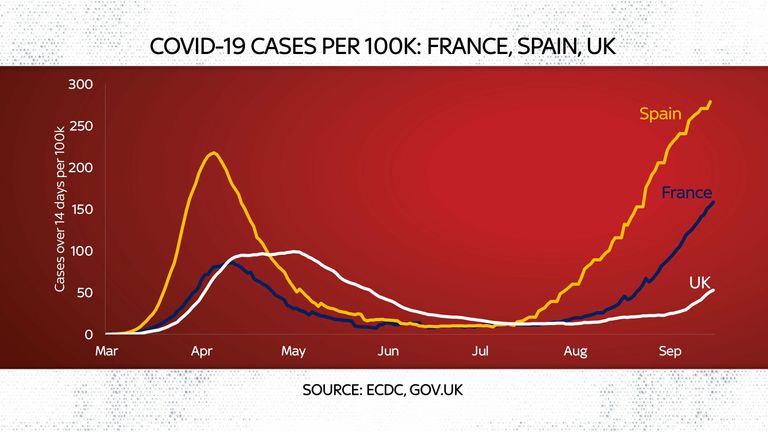 Labour leader Sir Keir Starmer, and the First Ministers of Scotland and Wales have called on the prime minister to hold a COBRA meeting.

Sir Keir said: “He now needs to take swift and decisive action at a national level to deal with this – he can’t afford to be slow.

“If the prime minister was to take action, the Labour party will support it and do what we can.”

Fears are growing that daily coronavirus case numbers could, in a few weeks, hit the figures seen in March and April if the government does not take decisive action now and “hammer down” on the disease.

It is understood they warned the UK is now about six weeks behind France and Spain and in danger of seeing a substantial increase in the number of cases by mid-October if the virus is left unchecked.

Matt Hancock, the health secretary, has told Sky News that a national lockdown was the “last line of defence”.

Downing Street is reluctant to have to return such draconian measures, acutely aware of the damage it would do the economy and to public health in the longer term.

“The PM is in a very difficult situation because it all rests on him,” one senior minister said this week.

“The instinct of the PM is that he has to keep this virus under control, because if there is a spike, it falls on his shoulders. I do feel for him.”

The prime minister also met with Chancellor Rishi Sunak and Business Secretary Alok Sharma on Thursday morning to discuss the economic situation, amid anxiety in government over the looming spike in unemployment when the furlough scheme winds up next month.

The Treasury, along with many of Mr Johnson’s backbenchers and others in his Cabinet, is of the view that the country cannot go back to a full lockdown and must exhaust all other options in order to avoid such a situation.