Home » Politics » Coronavirus: Who steps in to run the country if Boris Johnson can’t?

Downing Street has insisted that Boris Johnson remains “in charge of government” despite being admitted to hospital for coronavirus tests.

But Foreign Secretary Dominic Raab, who is effectively the deputy prime minister, will chair the government’s daily COVID-19 meeting later on Monday.

Senior Conservative MP Tobias Ellwood, who is chairman of the Commons defence select committee, told Sky News: “The prime minister has made it clear he will continue strategically leading the battle against the coronavirus, but the day-to-day operations will be handed to Dominic Raab.” 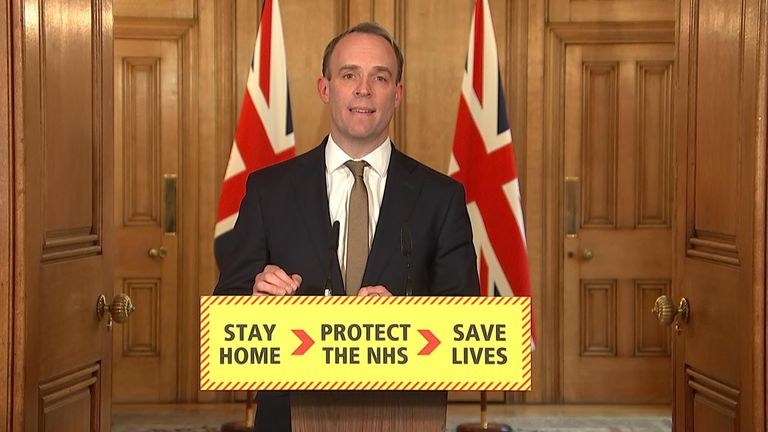 Sir Craig Oliver, who was David Cameron’s director of communications when he was PM, told Sky News that Mr Johnson’s hospital admission means “it is not really possible for him to be running the country in perhaps the way he would have been when he was in Number 11.”

“The most important thing to remember is we don’t have a presidential system in this country. Sometimes we act like we do. But the phrase that’s applied to the prime minister is primus inter pares – first among equals.

“The system is designed so that others can step up into the breach when necessary.”

Sir Craig added: “What he needs to do obviously is get better.

“The difficulty in these situations if you’re a leader is you probably want to push and push yourself and get yourself into a position perhaps where you’re exhausted.

“But the important thing is for him to be rested properly and get back. And in that time be able to hand over some of the responsibilities to others.”

Before Mr Johnson contracted the coronavirus, the foreign secretary was lined up as the “designated survivor” who could step in if the PM was left incapacitated by the virus.

Mr Johnson has been in self-isolation since testing positive for COVID-19 on 27 March.

This meant he could no longer front the government’s daily coronavirus news conferences.

But he continued to take meetings via video conference, including a gathering of his top team of ministers on Zoom.

Mr Raab is one of a number of cabinet ministers who have led the news conferences since the crisis began.