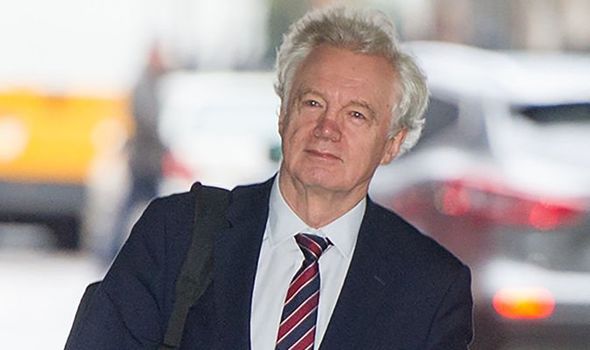 Mr Davis was shocked last week to discover that YouTube had removed a speech he delivered at a fringe meeting at the Conservative party conference in which he opposed the use of domestic vaccine passports.

The former Conservative party chairman says he has since been told by YouTube that this “should never have happened” but he fears that the Government’s own plans to change the law will hand sweeping powers to the “West Coast bullies” that dominate the internet.

He is concerned that plans to place a “duty of care” on companies to require them to remove harmful content will backfire and lead to widespread censorship.

Mr Davis wrote in an article for Express.co.uk: “By requiring big tech to have a ‘duty of care’, the Government will allow these companies to censor free speech and actively encourage them to do so. The Online Safety Bill is a poorly thought through piece of legislation that is a censor’s charter.

“It will hand more power to these unaccountable Silicon Valley giants. Let us be clear, this Bill will not corrupt free speech, it will destroy it.

“Centuries of tradition, history, and British ethos thrown on the bonfire of big tech ambition.”

Referring to his own experience, he said: “When YouTube removed my speech that challenged the supposed wisdom of domestic vaccine passports, it shut down the debate. It showed in the clearest terms why big tech cannot be trusted to police our free speech.”

Mr Davis says his experience demonstrates how ordinary people can be silenced.

He said: “Free speech belongs to everyone, and within the limits of the law anybody should be able to take part in a debate without fear of being censored…

“If YouTube attempts to silence elected Members of Parliament, then they are also happy to censor anyone.”

He hopes that the Government will look again at its plans and use the Online Safety Bill to “stand up to these West Coast bullies”.

“These modern industry Goliaths have had unrestrained power, abused their positions, and damaged our societies for too long,” he said.

“Big tech has dragged our society to the precipice, whether it is creating a mental health crisis for our children, destroying public civility, or curbing free speech.

“The public knows this and has had enough.”

A DCMS spokesperson said: “The Online Safety Bill will put more responsibility on internet companies to protect their users, particularly children, from harm.

A spokesman from YouTube said: “The flagged video was briefly suspended but upon review was immediately reinstated.

“With millions of hours of videos uploaded on our site each day, sometimes we make the wrong call.”