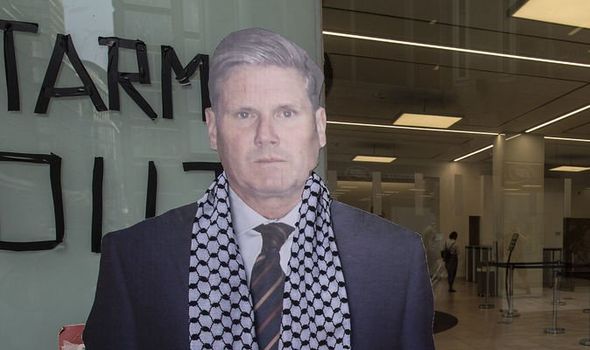 Campaign group ‘Defend the Left’ yesterday (Saturday, September 18) launched its ‘September protest storm on Starmer’ after hundreds of Corbyn-loyalists were kicked out of Labour. Hard left activists are planning a series of street protests across the country over the next two days (Monday, September 20 and Tuesday, September 21) ahead of a seaside showdown at Labour’s annual conference in Brighton next Saturday.

An on-line guide for local demos suggests protestors target the offices of “an unsympathetic Labour MP” and carry placards with “simple slogans” like “Stop the purge!”.

Activists are also being urged to dig deep and buy a 6ft 3in corrugated cardboard cut-out of under-siege Starmer.

Directing activists to a website called: ‘Celebrity Cut-outs’ the guide adds: “You might also want to buy a life-size cut-out of Keir Starmer on-line.”

Cardboard Keir is a little more cut-price at £34.97, but cash-strapped socialists can settle for a £2.97 Starmer mask “with stubble”.

Sir Keir’s attempt to re-launch his leadership at the Labour conference threatens to be overshadowed by an explosive battle with his own hard-left membership.

A mass demo is planned outside the conference centre on day one while inside the hall left-wing delegates will seek to derail a vote endorsing the man overseeing the party purge: Labour’s general secretary David Evans.

The internal battle follows a promise by Sir Keir to rid Labour of the scourge of antisemitism which gripped the party under Jeremy Corbyn’s leadership.

Labour was ordered to clean house by the Equality and Human Rights Commission last October after it found it had committed “unlawful acts of harassment and discrimination” during Corbyn’s time in office.

In July, Labour’s ruling National Executive banned three hard-left groups which white-washed the scale of the antisemitism crisis: Labour Against the Witch Hunt, Labour In Exile Network and Resist.

Hundreds of hard-left members allied to the banned groups have also been automatically kicked out of the party.