Home » Politics » Despite Scandal, Cuomo Still Has the Support of Democratic Voters 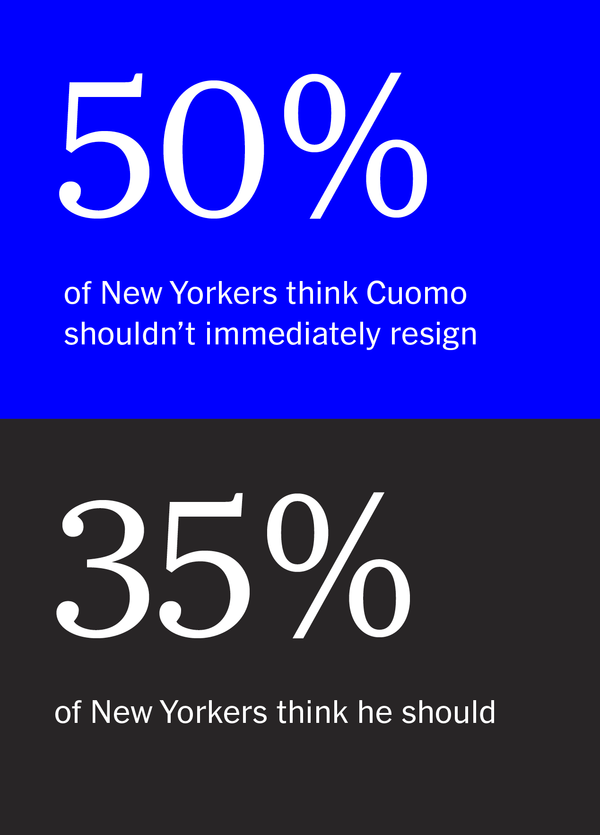 Gov. Andrew Cuomo has been in dire straits for weeks.

Most of New York’s major politicians have now called on him to resign, and he doesn’t exactly have the full confidence of his state’s voters, as a Siena College poll released yesterday showed. By an 18-point margin, respondents said they didn’t want him to run for a fourth term next year, as he had been widely expected to do, and his favorability rating is as low as it’s ever been.

But as harsh as those results might seem, the survey actually contained a remarkable amount of less-than-terrible news for the embattled governor. Just 35 percent of New York voters said he should “immediately resign,” while 50 percent said he shouldn’t. (Another 15 percent weren’t sure.)

A decisive majority, 57 percent, said they were satisfied with the apology Cuomo gave this month, while just 32 percent said they weren’t.

Politics has been said to make strange bedfellows, and in this case Cuomo’s most reliable supporters are some of the groups one might normally assume to be the most bothered by sexual harassment claims: namely, women and self-described liberal voters.

Among liberals, a whopping 69 percent said they were satisfied with how he had addressed the allegations. Just 19 percent were dissatisfied.

Cuomo’s favorability has fallen the furthest among Democrats, from 78 percent in a Siena poll last month to 59 percent now. Thirty percent of Democratic voters in New York now hold a negative view of their governor. Still, that’s a broadly favorable rating.

The Siena poll was conducted throughout last week, with a vast majority of interviews taking place before many high-profile politicians in the state called on Cuomo to resign, including nearly the entire New York delegation in Congress. And late last week the State Assembly opened an impeachment investigation focused on Cuomo’s actions toward women.

That investigation could turn up more damaging claims against him — and it is possible that more allegations could trickle out in news reports, as they have over the past two weeks, putting even greater pressure on the governor to step aside.

But it’s clear from the poll that many New York voters don’t think his actions warrant booting him from office — at least not yet.

Don Levy, the director of polling at Siena, said in an interview that the durability of Cuomo’s support appeared to be driven largely by his very public role guiding the state through the coronavirus pandemic — and now that vaccines are being widely distributed, he may be reaping rewards.

Levy cited “the good will and capital that he built up with months of daily appearances, press conferences, PowerPoints,” and pointed to a finding in the poll that 65 percent of New York voters said the worst of the pandemic was now behind us — the first time a majority have said this in a Siena survey.

“You have to surmise that a sizable number of New Yorkers credit Andrew Cuomo with getting us to this point,” Levy said.