Home » Politics » Did Mixing a Riot With a Pandemic Yield a Superspreader Event?

WASHINGTON — A grim reality has begun to dawn on Capitol Hill: The riot on Wednesday may have started a coronavirus superspreader event, fueled by the mob that roamed through the halls of Congress and unmasked Republicans who jammed into cloistered secure rooms.

It could have been worse. Because of the pandemic, lawmakers were instructed to remain in their offices unless speaking during debate over the certification of votes, tourists had been temporarily barred and the number of reporters allowed in each chamber at a time had been substantially curtailed.

But the normal precautions — already haphazardly enforced — collapsed as pro-Trump supporters stormed the Capitol. Did six feet of distance matter when lawmakers huddled on the ground as a mob tried to break through the door? Or as they tried to rush through tight corridors and into a cramped elevator to a secure space? Or as they sought to comfort a traumatized colleague?

On both sides of the Capitol, lawmakers, aides, police officers and reporters who had fled to secure locations have been warned that they might have been exposed to the coronavirus while hiding from the mob. Some people who had taken refuge in a room that included senators have been warned of possible exposure, while Dr. Brian P. Monahan, the attending physician of Congress, wrote to House lawmakers telling them to obtain a P.C.R. test as a precaution and to continue taking preventive steps against the spread of the virus.

In a letter referring to a crowded House safe room, Dr. Monahan said that “the time in this room was several hours for some and briefer for others,” warning that “individuals may have been exposed to another occupant with coronavirus infection” during that period.

That person has not been identified, but Representative Bonnie Watson Coleman, Democrat of New Jersey, announced Monday that she had tested positive. She directly pointed at a handful of Republicans who had refused to wear masks in the room despite entreaties from Democrats to do so.

“It angers me when they refuse to adhere to the directions about keeping their masks on,” Ms. Watson Coleman, a lung cancer survivor who will turn 76 next month, said in an interview. “It comes off to me as arrogance and defiance. And you can be both, but not at the expense of someone else.”

Ms. Watson Coleman said after taking a rapid antigen test on Monday, she was isolating and awaiting the results of a more accurate laboratory P.C.R. test. She began to feel symptomatic within the last 24 hours, and was experiencing “mild, cold-like symptoms,” including a cough and a raspy sore throat.

The scene that unfolded on Wednesday in that one secure room — where an offer of masks from Representative Lisa Blunt Rochester, Democrat of Delaware, was rejected by a group of Republicans — is emblematic of the challenge that has dogged Capitol Hill’s disorderly response to the pandemic.

Efforts to impose precautions — particularly in the House, where Democrats have maintained a proxy-voting system to reduce the presence of lawmakers vulnerable to the virus — have floundered as Republicans have balked at a mask mandate and lawmakers in both parties have repeatedly crowded the floor.

Republicans accused Democrats, who needed their narrow majority fully present in person to confirm Ms. Pelosi as speaker, of subverting their own rules on the first day of the Congress by permitting the construction of a small plexiglass enclosure with its own ventilation system in one of the galleries so that lawmakers in a protective quarantine could vote in person.

Just eight days into the session, the 117th Congress has already been rocked by the virus: Luke Letlow, a representative-elect from Louisiana, died from the virus before he could take his oath, while another, Representative Maria Salazar, Republican of Florida, was recovering from the virus in Miami. A few other lawmakers — including a pair of Republicans who are roommates together in Washington — have announced positive tests since Congress convened on Jan. 3.

Complicating matters further, lawmakers in both parties have delayed receiving a vaccination, despite being granted primary access, arguing that essential workers needed to receive it first. And because the Pfizer-BioNTech vaccine has been authorized as a two-dose vaccine, with the second shot administered about three weeks after the first, some lawmakers who have gotten their first shot have not yet received the second.

On a private caucus call with House Democrats where multiple lawmakers expressed concern about Ms. Watson Coleman and anger over the presumed circumstances of her exposure, Speaker Nancy Pelosi acknowledged that their mask enforcement efforts were not working, according to three people who disclosed the remarks on the condition of anonymity. She told lawmakers she wanted to have the Capitol Police enforce the policy, according to one person, of wearing masks on the House floor. Still, several officers often patrol the hallways without wearing masks fully covering their noses and mouths. 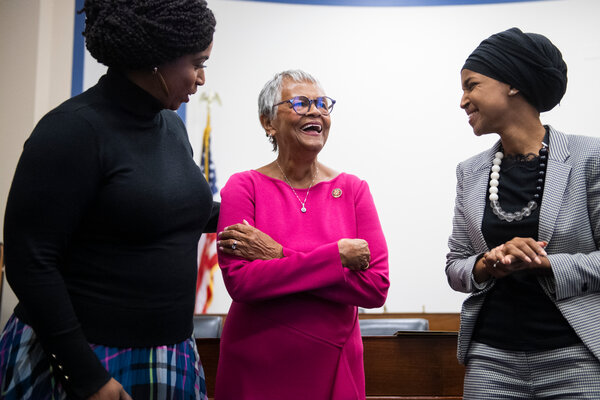 “While we were sheltering in place on Wednesday, I witnessed many Republicans refuse the masks they were offered, and we are now beginning to see the consequences,” said Representative Susan Wild, Democrat of Pennsylvania. “I believe there must be repercussions for this total lack of leadership or regard for the health and safety of their colleagues.”