Dominic Raab appears to have broom propped against door

Foreign Secretary Dominic Raab was live on Sky News to discuss the global coronavirus response and the ongoing human rights crisis brewing in the Middle East. However, Sky viewers were unable to take their eyes off the broom Mr Raab had used to prop the door of his room shut. The scene led many to jokingly suggest the Government minister had “barricaded” himself in to avoid an embarrassing interruption during the live interview, with the decision sparking hilarious reactions from viewers on social media.

One wrote on Twitter: “I see Dominic Raab doesn’t want anyone walking into the room.”

And another: “Dominic Raab has a brush at the door to keep the family out.”

And another one added: “Please ask Mr Raab why is he’s sitting in a posh broom cupboard. I can see the broom at the door on his left.” 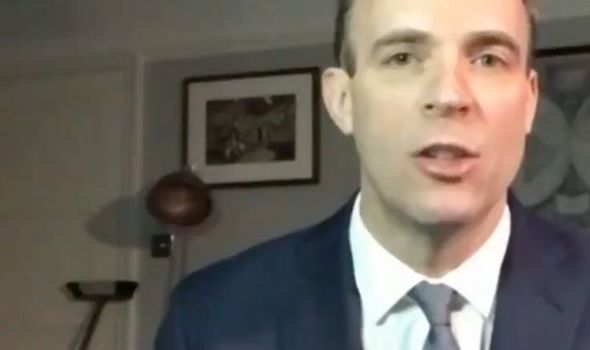