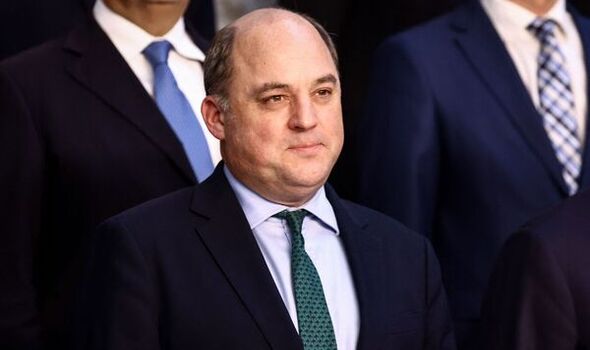 Defence Secretary Ben Wallace travelled to Washington for talks with his US counterpart amid fears Putin could detonate a nuclear warhead over the Black Sea.

Russia’s crumbling military and ongoing loss of territory across Ukraine have prompted renewed calls from Moscow’s hardliners for a nuclear strike.

Putin has sabre-rattled for several months, but Western intelligence sources say they have not seen any evidence he is moving his forces into position.

A senior defence source told the Daily Express: “As we approach winter in Ukraine, with their successes on the battlefield against Russian forces and in light of
Putin’s recent actions, it was important to meet face to face with US Secretary of Defence Lloyd Austin and others from the US Administration to discuss our shared security concerns.”

A blast in the Black Sea would mean it would take place south of Ukraine and east of Nato members Romania and Bulgaria.

Fears around the use of nuclear weapons increased after Putin announced he had annexed four regions of eastern Ukraine – a move condemned by Ukraine and Western countries.

He vowed to “protect” the newly annexed lands “with all the forces and means at our disposal”.

The Prime Minister’s official spokesman did not comment on Mr Wallace’s meeting, but said: “We are very clear with Putin that the use of nuclear weapons will lead to severe consequences.”

He added: “I would guide away from speculating on this as an issue. I think the public need to be reassured that we are taking a strong lead in this area.”

Ministers are also concerned about Putin’s use of kamikaze drones on civilian targets and indiscriminate long-range missile attacks.

James Cleverly, the Foreign Secretary, de-cried them as “cowardly drone attacks”. He added: “These are the desperate acts of a man losing a war on the battlefield.

“He won’t break the Ukrainians or our resolve to stand with them.”

Head of the UK military, Admiral Sir Tony Radakin, said last night: “The Government has committed to increasing defence spending further, even with a tough economic outlook. This is really significant.”