Election Day in America is Nov. 3, but in-person early voting began in earnest Friday in four states — including Minnesota, a key Midwestern battleground that both President Trump and former Vice President Joseph R. Biden Jr. visited to mark the occasion.

Mr. Biden gave a speech in Hermantown, Minn., near Duluth, after touring a union training center, while Mr. Trump planned an evening rally at the airport in Bemidji, a northern Minnesota city of 15,000 known for its towering statues of Paul Bunyan and his blue ox, Babe.

With the coronavirus pandemic limiting indoor gatherings, elections administrators have urged voters to cast ballots either by mail or in person before Election Day. States already have seen record numbers of absentee ballot requests, and officials expect unpredecented levels of voter participation before Nov. 3.

Mr. Biden, whose trip was timed to coincide with the beginning of Minnesota’s early voting period, made just a scant allusion to urge people to vote now that they can.

“It’s time to take the country back, folks,” Mr. Biden said, as his speech drew to a close. “It’s going to start here, today, with voting in Minnesota.”

He then put his mask on and walked away from the lectern.

Mr. Trump, on Twitter, urged supporters in Virginia to vote as polls opened Friday. The president did not mention early voting in Minnesota, where he was planning to speak, or in South Dakota and Wyoming, states he is widely expected to win.

“Voting starts in Virginia TODAY, and we are going to WIN,” he wrote about a state in which his campaign has not bought a single television advertisement this election cycle, according to Advertising Analytics. “I’ll be having a Big Rally in Virginia, to be announced soon!”

Gov. Tim Walz of Minnesota appeared at an event Friday morning to promote early voting with Senator Amy Klobuchar and other top Minnesota Democrats in the Minneapolis suburb of Brooklyn Park.

Mr. Walz said most of Minnesota’s early voting would take place by mail. He said he had received his own ballot but had not yet returned it.

“I think we’re ready. We’ve made the case that vote by mail, it’s safe and secure, but if you need to vote in person you can do that, too,” Mr. Walz said in a phone interview Friday. “It feels like there is a sense of calm around it.” 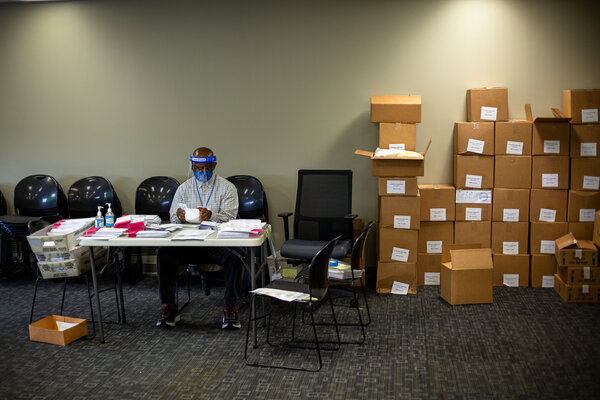 At a municipal voting center in northeast Minneapolis, voters waited 30 to 40 minutes in a line that snaked through an office park near Interstate 35W. The familiar “I Voted” stickers were replaced with a more precise “I Voted Early” model.

Darcy Berglund of Minneapolis said she had voted the first day that polls were open because she often travels back and forth to Iowa to care for her ailing mother.

In Virginia, Senators Tim Kaine and Mark Warner voted in Richmond and Alexandria, while Gov. Ralph Northam cast his ballot in Richmond, where he was the fifth person of more than 75 in line at 8 a.m.

CNN showed lines of more than two hours to vote at an early voting center in Fairfax County, a Washington suburb with more than a million residents. Some of the delays in voting may stem from social-distancing measures, which require people to space themselves out more than usual. But over all, the first day of early voting appeared to have gone relatively smoothly, without the kind of widespread complaints and disruptions that occurred in some states during their primary elections.

Mr. Kaine, who was Hillary Clinton’s running mate in 2016, wrote on Twitter — unsurprisingly — that he had voted early for Mr. Biden and Democrats down the ballot. “What a great day!” Mr. Kaine wrote, describing the experience as “easy” and “convenient.”

Mr. Northam said in a statement that “Virginians can be confident their vote is secure, and will be counted,” and urged “every Virginia voter to know their options and make a plan for safely casting their ballot.”

In most places in states that allow in-person early voting, early voting means going to a City Hall or a local board of elections, though some larger jurisdictions will arrange for regional early vote centers. The pandemic has brought even larger early-vote locations, with some major league sports franchises opening their vacant arenas and stadiums for early voting.

In 2012, Barack Obama became the first president to vote early, casting a ballot for himself at an early-voting site near his home on the South Side of Chicago. Mr. Trump has voted by mail, a process he has publicly denigrated, for recent elections in Florida, which he made his permanent address last year.

The F.B.I. director warned of Russian election interference and white supremacist violence, in testimony that contradicted efforts by President Trump and other officials to downplay the threats.

Early voting for the presidential election starts in September in some states. Take a look at key dates where you live. If you’re voting by mail, it’s risky to procrastinate.