The Brussels diplomat faces a race against the clock to reach a deal with UK counterpart Lord Frost after Boris Johnson walked out of negotiations when his deadline for a pact lapsed last week. Downing Street insisted there was no point resuming discussions unless there was a change in stance from the EU. Mr Barnier offered No10 an olive branch by agreeing to accept Britain’s sovereignty in future wrangling over the trade deal.

He insisted it was “very important” to be back at the negotiating table having agreed to intensify negotiations and put pen to paper on the final deal after months of stalling.

“It think it’s very important to be back at the table,” he said arriving in London.

“Every day counts, I think we have a huge common responsibility.” 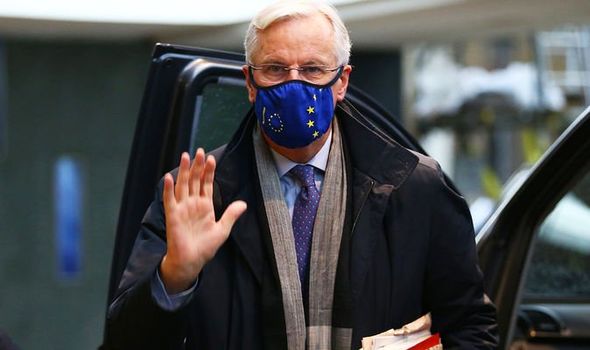 EU insiders believe the two sides have just three weeks to finalise terms on 11 outstanding issues, including fisheries and common standards, and also draw up a joint legal text, which could run up to 500 pages.

One diplomatic source said: “There is about three weeks left before we get to the very limits of this process.”

Another said any further delays would mean the EU would not have enough time to fully ratify the agreement, a process which ends with a vote by the European Parliament.

The official said: “It’s already going to be a struggle getting the deal ready for the European Parliament on time.”