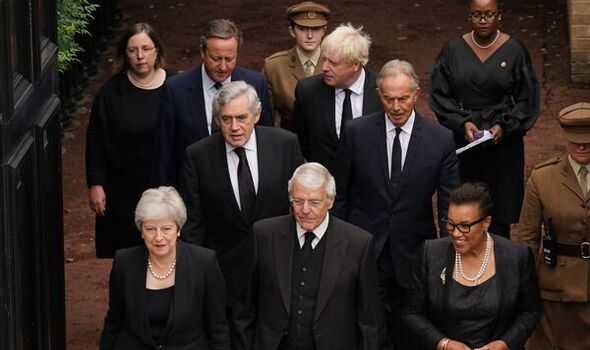 He joined former Prime Minister’s Theresa May and Gordon Brown in paying their deeply personal tributes to the late monarch.

And a fourth former PM, Sir Winston Churchill, was said by his grandson Sir Nicholas Soames to have “revered” the Queen and “loved her very much”.

Mr Cameron, who led the Government from 2010 to 2016, described King Charles as “intelligent and charming”.

He added: “Like his mother, he is a superb diplomat. I saw him in action at the Commonwealth heads of government meetings. He knows every leader personally, he interacts with them brilliantly.”

“The soft power that the British monarch brings helps a prime minister and a government with all those international relations.”

“It was obviously outstanding under Queen Elizabeth II. I think you’ll see that Charles III will be a very worthy successor in that regard.”

In a touching anecdote, Mr Cameron went on: “My wife always said when we had to go to one of those banquets or dinners or big meetings, ‘I hope I’m sitting next to Prince Charles, he’s the bestperson to sit next to, he is the most charming company’.”

“He’s also highly intelligent. While it is incredibly sad that we are mourning the loss of our greatest monarch, I think the constitutional monarchy is in great hands.” Mr Cameron, Mrs May and Mr Brown all said the monarchy will gradually evolve under King Charles.”

Mr Brown had lined up alongside other ex-leaders Sir Tony Blair, Boris Johnson, Mr Cameron, Mrs May and Sir John Major at the Accession Council ceremony at St James’s Palace on Saturday when Charles was formally proclaimed King.

The ex-Labour leader, premier from 2007 to 2010, also told the BBC political programme Sunday with Laura Kuenss­berg how he believes the new sovereign will make crucial changes to the approach taken by the Royal Family.

He explained: “What Charles has already indicated is that the monarchy is going to be smaller. It’s going to be more like a Scandinavian monarchy in the future, but not in a bad way – more informal. He stopped as he entered Buckingham Palace and talked to people in the crowd, and that was a signal that he was sending that he wanted people to feel that he was approachable.”

Mrs May, PM from 2016 to 2019, said while she expects the monarchy to continue to adapt to changing times, people would appreciate only small changes.

She stated: “The Royal Family have been steadily evolving a different approach, a different way of doing things over time and I am sure King Charles will continue to take that forward.”

“He is a different person and he may want to change things in some ways, but I think, critically, as the Queen did, any change in the way things are done would be done gradually and very carefully.”

“I think the public will expect that sense of continuity, but also that sense that the world has been changing, continues to change, so a willingness to evolve alongside that.”

“What they will hope and what they will get is that deep interest in people which Her Majesty had. And King Charles has that too – a deep concern for people.”

Sir Nicholas revealed Sir Winston had “revered” the late monarch and shared with her a warm paternalistic friendship.

He had been her first prime minister when she came to the throne in 1952 and she was to have a 70-year reign that saw him followed by 14 more premiers.

“He’d known her since she was a child and he loved her very much indeed.”

Her comments were among thousands of tributes from around the world that have continued to flood in.

Australia has announced it will have a bank holiday to mark a national day of mourning for the late Queen following her state funeral.

Prime minister Anthony Albanese confirmed that he and his Governor-General David Hurley will be travelling to the UK in coming days in order to attend the funeral next Monday.

Mr Albanese also revealed he will not hold a referendum on whether Australia should become a republic in his first term.

He said now is a moment to show gratitude for the Queen’s “service to Australia, the Commonwealth and the world”.