Home » Politics » For Schumer and Pelosi, the Challenge of a Career With No Margin for Error

The top two Democrats in Congress face a daunting pile of legislative imperatives. With President Biden’s agenda hanging in the balance and few votes to spare, can they get it done? 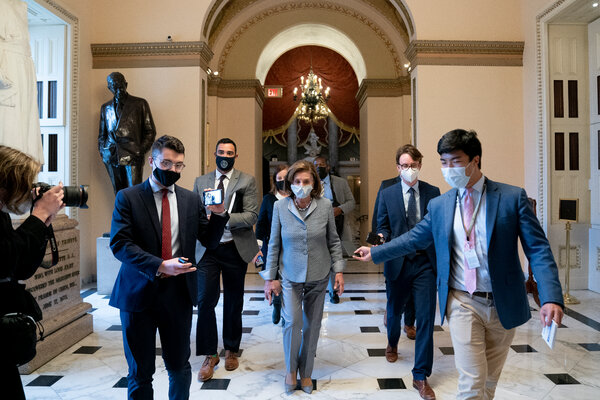 On Tuesday, Mr. Schumer convened breakfast for 20 Democratic senators, a sit-down at noon with key Democratic moderates, including the balking Joe Manchin III of West Virginia and Kyrsten Sinema of Arizona, then on to the weekly lunch with the full Democratic caucus.

On Wednesday, Ms. Pelosi sandwiched a confab with the Ways and Means chairman, Representative Richard E. Neal, between meetings with the leaders of Britain and Australia; greeted House Democrats as they picked up lunches in her office; rushed to the White House to meet with President Biden and Mr. Schumer; joined a messaging meeting on the bill with the White House communications director, Kate Bedingfield; rallied with the League of Conservation Voters; met with the leaders of the House’s factionalized caucuses; and then headed to the home of Representative Donald S. Beyer Jr. in Northern Virginia for a Democratic Congressional Campaign Committee dinner and, yes, more strategizing.

Nobody said it would be easy, but the multiple tasks piling up for Mr. Schumer and Ms. Pelosi present a particularly daunting set of challenges: A $1 trillion infrastructure bill awaits consideration in the House on Monday, a $3.5 trillion social policy and climate change measure is still being stitched together, and a possible government shutdown looms on Friday followed by a potential debt crisis next month.

Without a single vote to spare in the Senate and as few as three in the House, the coming weeks could pose the most difficult test that any pair of congressional leaders has faced in memory, recent or otherwise. The Affordable Care Act was a feat, involving remarkable twists and multiple near-deaths, but even with 39 Democratic defections, it still passed the House by five votes.

Medicare, Medicaid, food stamps and other programs of President Lyndon B. Johnson’s Great Society were transformational, but Johnson was working with huge Democratic majorities.

“When every single person has a veto, everyone realizes they have the power to say yes or no; they can be queen or king for the day,” said Tom Daschle, the former senator from South Dakota and the last Democratic majority leader who presided over a Senate without a vote to spare. But, he added, in his day, the Sept. 11, 2001, attacks brought about a sense of unity and bipartisanship. “It’s much harder now,” he said.

Or, as Senator Chris Van Hollen of Maryland told colleagues at the Senate Democratic caucus’s closed-door lunch on Tuesday: “Put on your heat shields and buckle up, because this is going to be intense.”

There is already plenty of grumbling in the party’s leadership. Some fault Mr. Biden for blessing the effort by a bipartisan group of senators to hive off traditional infrastructure from the larger budget bill, thus separating it from spending programs like an initiative on rural broadband that could have helped bring reluctant moderates along.