Home » Politics » House Lays Out Case Against Trump, Branding Him the ‘Inciter in Chief’

WASHINGTON — The House impeachment managers opened their prosecution of Donald J. Trump on Wednesday with a point-by-point account of his monthslong campaign to overturn his election loss and goad his supporters to join him, bringing its most violent spasms to life with never-before-seen security footage from the Jan. 6 Capitol attack.

Filling the Senate chamber with the profane screams of the attackers, images of the police officers they overran and brutalized, and near-miss moments in which Vice President Mike Pence and lawmakers came steps away from being confronted by a mob that was hunting them down, the prosecutors laid out their case that Mr. Trump’s election lies had directly led to the assault.

The prosecutors played frantic police radio calls warning that “we’ve lost the line,” body camera footage showing an officer pummeled with poles and fists on the West Front of the Capitol, and silent security footage from inside the building showing Mr. Pence, his family and members of the House and Senate terrorized, racing to evacuate as the mob closed in chanting: “Hang Mike Pence! Hang Mike Pence!”

All of it, according to the nine Democrats pressing the charge of “incitement of insurrection” against Mr. Trump, was the foreseeable and intended outcome of his desperate attempts to cling to the presidency. Reaching back as far as last summer, they traced in meticulous detail how Mr. Trump spent months cultivating not only the “big lie” that the election was “rigged” against him, but stoking the rage of a throng of supporters who made it clear that they would do anything — including resorting to violence — to help him.

The managers argued that it warranted that the Senate break with two centuries of history to make Mr. Trump the first former president ever to be convicted in an impeachment trial and disqualified from future office.

“Donald Trump surrendered his role as commander in chief and became the inciter in chief of a dangerous insurrection,” Representative Jamie Raskin, Democrat of Maryland and the lead manager, told the senators, who watched the footage in silence in the same spots where they had been when the mob breached the building last month.

“He told them to ‘fight like hell,’” Mr. Raskin added, quoting the speech that Mr. Trump gave supporters as the onslaught was unfolding, “and they brought us hell on that day.” 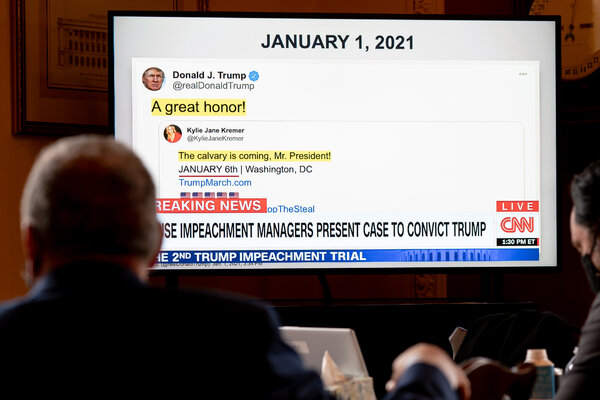 Though the House managers used extensive video evidence of the Jan. 6 riot to punctuate their case, they spent just as much time placing the event in the context of Mr. Trump’s broader effort to falsely claim the election had been stolen from him, portraying him as a president increasingly desperate to invalidate the results.

“With his back against the wall when all else has failed, he turns back to his supporters — who he’d already spent months telling that the election was stolen — and he amplified it further,” said Representative Joe Neguse, Democrat of Colorado.

What You Need to Know