WASHINGTON — After meeting in the Oval Office earlier this month with President Biden, Vice President Kamala Harris and his fellow senior House Democrats, Representative James E. Clyburn of South Carolina made a beeline to Ms. Harris’s office in the West Wing to privately raise a topic that did not come up during their group discussion: the Supreme Court.

Mr. Clyburn, the highest-ranking African-American in Congress, wanted to offer Ms. Harris the name of a potential future justice, according to a Democrat briefed on their conversation. District Court Judge J. Michelle Childs would fulfill Mr. Biden’s pledge to appoint the first Black woman to the Supreme Court — and, Mr. Clyburn noted, she also happened to hail from South Carolina, a state with political meaning for the president.

There may not be a vacancy on the high court at the moment, but Mr. Clyburn and other lawmakers are already maneuvering to champion candidates and a new approach for a nomination that might come as soon as this summer, when some Democrats hope Justice Stephen Breyer, who is 82, will retire. With Democrats holding the narrowest of Senate majorities, and Ruth Bader Ginsburg’s death still painfully fresh in their minds, these party leaders want to shape Mr. Biden’s appointment, including moving the party away from the usual Ivy League résumés.

The early jockeying illustrates how eager Democratic officials are to leave their mark on Mr. Biden’s effort to elevate historically underrepresented contenders for a landmark Supreme Court nomination. But it also casts a spotlight on discomfiting issues of class and credentialism in the Democratic Party that have been just below the surface since the days of the Obama administration.

Some Democrats like Mr. Clyburn, who have nervously watched Republicans try to repackage themselves as a working-class party, believe that Mr. Biden could send a message about his determination to keep Democrats true to their blue-collar roots by choosing a candidate like Ms. Childs, who attended public universities.

“One of the things we have to be very, very careful of as Democrats is being painted with that elitist brush,” said Mr. Clyburn, adding: “When people talk to diversity they are always looking at race and ethnicity — I look beyond that to diversity of experience.”

Representative G.K. Butterfield of North Carolina, like Mr. Clyburn a veteran member of the Congressional Black Caucus, made a similar point in an email to the White House counsel, Dana Remus, last month listing the caucus’s preferred criteria for federal court appointments. Near the top of the list, Mr. Butterfield said, was: “The judge should have a diversity of experience in multiple settings and in multiple areas including experiences outside of the law.”

Mr. Biden’s pledge to nominate the first Black woman to the court was an unusual kind of campaign promise: Mr. Clyburn nudged him to do it at a debate in Charleston before South Carolina’s pivotal primary last year. It was a vow that even some of the president’s aides resisted, worried that it might look like pandering.

Mr. Biden has said little in public since being elected about his preferences for the court, but as a former chairman of the Senate Judiciary Committee, he has something of a split personality when it comes to the politics of personnel. While happy to highlight his Scranton, Pa., roots, state school diploma and “Middle-Class Joe” moniker, he has long surrounded himself with aides and advisers who brandish the sort of pedigree he lacks.

And some White House officials are already bracing for what they believe will be unfair attacks from the right on whichever Black woman they pick, convinced that the eventual nominee must have an impeccable résumé. “It’s going to have to be someone who has unquestioned credentials so it doesn’t look like it’s an unqualified person,” said one senior Biden official, who spoke about possible court nominees on condition of anonymity to share thinking from inside the West Wing. 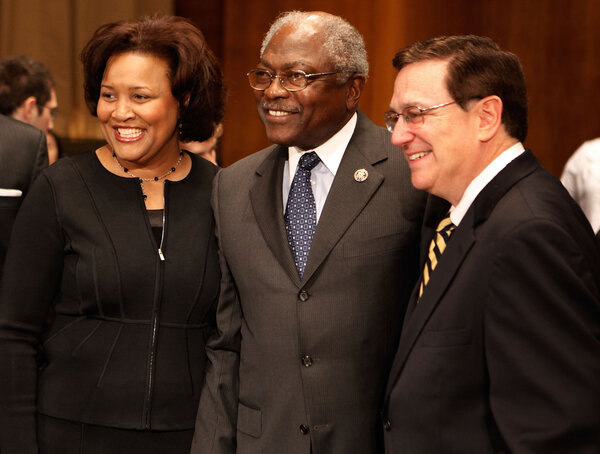 Among the potential candidates being pitched for a Supreme Court seat, Ms. Childs has a background that differs from most recent nominees. Unlike eight of the nine current Supreme Court justices, Ms. Childs, 54, did not attend an Ivy League university. Her mother worked for Southern Bell in Columbia, S.C. and Ms. Childs won a scholarship to the University of South Florida. She later graduated from the University of South Carolina’s law school and became the first Black woman to make partner at one of the state’s major law firms. In the fashion of an earlier generation of jurists, she rose in state politics before being appointed to the bench. Ms. Childs served as a top official at South Carolina’s labor department before being appointed to the state’s workers’ compensation board.

“She is the kind of person who has the sort of experiences that would make her a good addition to the Supreme Court,” Mr. Clyburn said.

Mr. Clyburn, whose coveted endorsement helped revive Mr. Biden’s listing campaign before the South Carolina primary last year, has been particularly active on her behalf as part of what his advisers say is his most significant request of the administration. The 80-year-old House whip has made the case for Ms. Childs with Ms. Harris; Ms. Remus; and Senator Richard J. Durbin of Illinois, the Judiciary Committee chair.

Bakari Sellers, a Democratic political commentator who is close to Ms. Harris, has also pitched members of the vice-president’s inner circle on Ms. Childs, who was appointed to the federal bench by Mr. Obama in 2010.

“Not just for our party but for the judiciary it’s important to have somebody who has lived experiences,” Mr. Sellers said.

What’s prompting some of these officials to go public with a more aggressive form of advocacy are two developments.

First, they saw the makings of a short list in a Ruth Marcus column in The Washington Post earlier this month naming a pair of potential Breyer successors, who like Ms. Childs are young enough to serve on the court for a few decades. The two cited — U.S. District Judge Ketanji Brown Jackson of Washington, D.C., and California Supreme Court Justice Leondra Kruger — both have Ivy League law degrees and important connections. Ms. Jackson, 50, was a clerk for Mr. Breyer himself and Ms. Kruger, 44, served as Mr. Obama’s deputy solicitor general

There are a handful of other Black women in their 40s with elite credentials who have caught the eye of lawmakers, including some on the Judiciary Committee. There is Danielle Holley-Walker, the dean of Howard University’s law school, and Leslie Abrams Gardner, a Federal District Court judge in Georgia who is a younger sister of Stacey Abrams.

More significant is the matter of timing.

There are relatively few Black women on the federal appeals courts, where presidents often draw their nominees to the Supreme Court. Very soon, however, there will be another vacancy on the U.S. Court of Appeals for the District of Columbia Circuit — which can be a springboard to the high court — when Judge Merrick B. Garland resigns to become attorney general. Ms. Childs may be better positioned to ascend to the Supreme Court if she were to serve on that appeals court, some of her admirers say.

“There is an immediate vacancy there so I would advocate for her consideration to the D.C. circuit,” Mr. Butterfield, himself a former state Supreme Court judge, said of Ms. Childs. “And when and if there’s a Supreme Court vacancy she ought to be considered for that, as well.”

Another possible contender seen for a court seat is Cheri Beasley, who lost her re-election as chief justice of the North Carolina Supreme Court by 412 votes in November. She also went to a public university and climbed through the judiciary via service on lower state courts. Yet Ms. Beasley has told people that she is considering a bid for North Carolina’s open Senate seat next year, according to one Democrat who has spoken to her.

When a court vacancy does occur, several Democrats say, they are bracing for Obama-era tensions, which were papered over by former President Donald Trump, to emerge.

Many members of the Congressional Black Caucus, as well as a number of white Democrats, say they believe the party is too closely linked to elites, and that perception only hands political fodder to Republicans during campaign season.

“This isn’t being critical of the Harvards or the Yales, but I think there’s some great attorneys out there that are really, really smart that come from other places on this earth,” said Senator Jon Tester of Montana, where Democrats lost all three marquee races last year. “And I think we ought to consider them.”

Vi Lyles, the mayor of Charlotte, said, “having the broadest perspective of what’s gone on in the country makes you a better decision maker and leader.”

Even more delicate are lingering frustrations among Black leaders, many of whom went to state schools or historically Black institutions, about Mr. Obama’s arms-length treatment of the Congressional Black Caucus and his administration’s seeming preference for appointees with elite credentials.

“He was predisposed to Ivy League nominees, I think we can all agree on that,” said Mr. Butterfield.

Mr. Sellers was even blunter. “I love Barack Obama, but there was an Ivy League culture that emanated from the White House, and we got to move away from that,” he said.

The frustration with Mr. Obama culminated with his selection of Mr. Garland for the Supreme Court following Justice Antonin Scalia’s death in 2016. Some congressional Democrats believed the former president could have put pressure on Republicans, and energized Democrats, had he chosen a Black woman and were infuriated when he said he did not seek out “a Black lesbian from Skokie.”

What Mr. Clyburn will only say obliquely is that Mr. Biden does not just owe Black voters for his nomination, he’s indebted to African-Americans who resurrected his candidacy in South Carolina and those across the South who all but cemented his nomination three days later as he swept the region on Super Tuesday.

Some African-American Democrats believe that Black Americans will rally behind whichever Black woman Mr. Biden nominates and suspect Mr. Clyburn is looking for a rationale to elevate his home state and burnish his legacy.

Yet few politicians preach more than Mr. Biden about the importance of “dancing with the one that brung you,” as the president often puts it. And so far, Mr. Clyburn has been able to install two of his closest allies in the administration, with former Representative Marcia Fudge being named housing secretary and Jaime Harrison tapped to lead the Democratic National Committee.

Asked if he could support Ms. Childs to the high court, Senator Tim Scott of South Carolina, a Republican and the first Southern Black senator elected since Reconstruction, said he was not ready to commit. But he praised her for having “a very good reputation” and said her appointment “would reflect the positive and powerful progress we’ve made in the great state of South Carolina.”

Mr. Scott was more direct, though, when asked if Mr. Biden owed it to South Carolina’s Black voters given the role they played in his path to the presidency.

“Jim Clyburn would say so,” he said with a smile.