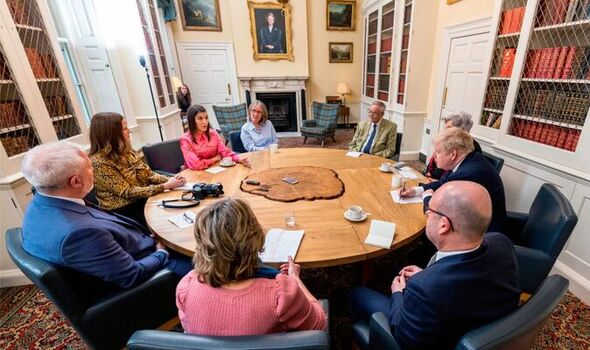 The Prime Minister insisted that despite the country’s leading role in helping Ukrainians, and the continuing impact of coronavirus, he has not been diverted from his mission to level up the country.

He made the promise to a group of Daily Express readers he had invited to quiz him on any topic. In a 30-minute question and answer session overlooked by a portrait of Margaret Thatcher in her former office, he gave an update on the situation in Ukraine.

But he also told the panel that tackling crime, improving the NHS and spreading opportunity are still top priorities for the Government.

And he promised there would not be a return to uncontrolled immigration to fill the high level of job vacancies.

He said: “I want to assure Express readers that this government is not diverted from its basic job of delivering for all of our people.

“We’ve been through Covid and we’ve been through all sorts of things but we remain absolutely indefectible in pursuit of the objectives of the people of this country, making sure that we have safer streets, better hospitals, that we invest in and improve our NHS and make sure it spends its money as effectively as possible.

“And that we are the best country in the world to live in, grow up, have a family in and buy a house in and everything else, and that’s the plan.

“Levelling up is a great national agenda. It’s the right thing for the UK. There’s huge parts of the UK that for 40, 50 years, 60 years or more, just haven’t been thought of as being places where businesses could bloom, but they are.

“That’s what we want to see. It’s all about opportunity everywhere. That’s the name of the game.”

Mr Johnson also revealed that our paper is loved by him and the No10 team for its upbeat patriotic outlook.

He said: “We love the Express.We are fans in No10 of the Express. What I love most about the Express is it understands that basically when the sun comes up in the morning, it comes up on a pretty fantastic country where a lot of things are basically going right.

“You don’t get that impression from some of the media.”

SUZI WHITE, 72, from Taunton, Somerset, is semi-retired after a career in sales in the communications industry. She asked about police recruitment and told the Prime Minister: “The crime rate is still increasing at the moment.”

The PM replied: “Crime unfortunately has changed – there’s so much more now on the internet and that’s thing that we are learning to deal with. And it’s very, very important that we have the people who understand cyber fraud and who can crack down on it.

It’s appalling when people get scammed. And it’s happening far, far too much. We’re trying to crack down on that. There are all sorts of ways we can do that. The police are getting much, much better. And I think as society gets better at understanding the internet, think people will get much more vigilant, rather like car theft.

Remember with car theft, we basically managed to make it far more difficult for car thieves to succeed because we hardened the defences of the cars. And we will do the same with the internet.

The thing I want to drive down more than anything is basic neighbourhood crime that I think absolutely changes people’s quality of life, and there are things that give you that terrible shock, like an assault or burglary and murder.

There we are having more success and those numbers are coming down, I’m proud to say. Those are the things that spent a long time fighting when I was mayor of London.

I mean we really did get those numbers down.And the way we did it was by putting more police out on the street and giving them more powers and backing them and saying we believe in the police, we believe in law and order, we prioritise you, we prioritise their ability to do stop and search and their ability to back people up and, you know, just simple, simple, basic policing.

But you need more of them. Every police officer will tell you that they need more out there. So we’ve recruited another 11,000 since I’ve been PM.

One statistic I’m proud of is of the new recruits, 42 per cent are women. So it is changing, so the whole balance of police, which is a good thing, particularly when it comes to tackling crimes against women, sexual violence, because I think it changes the culture of the police, the way they respond.”

CARLIE PLEASANT, 32, of Sittingbourne, Kent, is a mum of one and has cystic fibrosis. The NHS retention officer was a big backer of the Daily Express’s award-winning crusade to help her and others get the wonder drug Kaftrio on the NHS. She asked Mr Johnson: “Why should others have to endure such long fights for vital drugs? Now the UK is out of the EU and the European Medicines Agency, what will the Government do to ensure we lead the world in new drugs and, crucially, allow patients to access them immediately, as they are approved?”

The PM replied: “First of all, I’m so pleased that we got the right decision for you. And we try to be as active as we can, making sure British people get access to all the drugs they need as fast as possible.

Some of them are very expensive. I was just reading today about one particular drug, I think for muscular dystrophy for kids, which is £1.8million pounds per course. So we pay for it and we should do, and as a society I think we should be very proud of what we do to help people with drugs.

I know that they seem incredibly expensive and people will say that that’s unfair, that the pharmaceutical companies are taking too much, but the truth is that they also need to be able to invest in research. If you don’t do the research, you’re never going to make these breakthroughs. It is a capitalist system that produces the breakthroughs and that’s the only way that it works, I’m afraid.

You just need gigantic companies to have the deep pockets to do this, you need huge numbers of people, scientists in labs for a very, very long time to do it. So it costs a lot but then you’ve got to make sure that the taxpayer can fund it.

Nice (the National Institute for Health and Care Excellence) is the way we’ve always done it. I’m glad they made the right decision in your case. Believe me, as an MP I’ve had plenty of people come to me saying, “I need this, Nice won’t pay for it, we need to have it.”

And it is a huge expense. It’s gone up from something like 27 per cent of government day-to-day expenditure in 2010 to 44 per cent. It’s absolutely huge. And costs like the one that you mentioned are part of it.

That’s why we’re raising the health and care levy, which is not popular with everybody. I wish we didn’t have to but you need to fund the nurses, the doctors, the drugs, the hospitals.

JON RICHES, 49, of Caerphilly, is founder of JAR Site Solutions, which provides security and stewarding at Premier League games and other sporting, music and public events. He asked: “We are working hard to keep the doors open due to rising taxes, fuel and energy costs. What can the Government do to help small businesses in providing training and upskilling for staff and the unemployed to rebuild a qualified and well-trained workforce?”

The PM replied: It’s true that the economy has come back strongly post- Covid, post-furlough. We’ve got 436,000 more people on the payroll than there were before the pandemic.

Youth unemployment is virtually at a record low. So the labour market is incredibly tight. In sectors like retail and hospitality, it is particularly acute. So we’ve got a few things that we’re doing. First of all, I want you to know that I think that mass uncontrolled immigration is not always the answer.

Of course, we’re going to have lots of Ukrainians coming in who will work hard and do a lot of good things for our country. We should welcome people in who qualify and want to come here, who are obviously going to contribute to the economy of the country.

But we should be focusing on the skills of people in the UK. We may have 1.25 million vacancies but we’ve got 1.8 million people claiming benefits. Not all can’t work, on the contrary.

Most of them just need the confidence that comes with being in a place of work and the skills. We’ve got a programme called Way to Work to get them off benefits into work. And what we’re also doing is making sure that they upskill.

We’ve got a programme called the Lifetime Skills Guarantee, so that everybody is entitled to £3,000 worth of training. We have the talent here. We don’t need just to say, let’s pull this giant lever called letting everybody in again in an uncontrolled way.

What I want to do is focus on training people up here, giving them confidence, getting them into a place of work and helping them to learn on the job.