Home » Politics » In Gosar, a Far-Right Extremist Found an Ally in Congress

WASHINGTON — Nick Fuentes, the leader of a white nationalist group, was bemoaning the political persecution he said he was facing from the federal government when he paused during a recent livestream to praise one of his few defenders.

“There is some hope, maybe, for America First in Congress,” Mr. Fuentes said, referring to the name of his movement, a group that aims to preserve white, Christian identity and culture. “And that is thanks to — almost exclusively — to Representative Paul Gosar.”

Mr. Gosar, a five-term Republican and dentist from Prescott, Ariz., emerged this year as a vociferous backer of the “Stop the Steal” movement that falsely claimed that former President Donald J. Trump won the 2020 election and spearheaded the rally in Washington on Jan. 6 that led to the deadly Capitol riot.

But Mr. Gosar’s ties to racists like Mr. Fuentes and America First, as well as similar far-right fringe organizations and activists, have been less scrutinized. A review of public comments and social media posts suggests that in Mr. Gosar, they have found an ally and advocate in Congress.

His unapologetic association with them is perhaps the most vivid example of the Republican Party’s growing acceptance of extremism, which has become apparent as more lawmakers espouse and amplify conspiracy theories and far-right ideologies that figure prominently in the belief systems of fringe groups.

“The politicians get the support of the far-right groups that are emerging and are becoming more visible — they get the support of those constituents,” said Kurt Braddock, a communication professor at American University who studies extremism. “What’s significant for the groups is that by associating themselves with these politicians — sitting members of Congress — they get a level of legitimacy that they wouldn’t have gotten otherwise.”

Representative Matt Gaetz of Florida appeared at an event last year where security was handled by the Proud Boys, a far-right militia with more than a dozen members who have been charged in the Capitol riot. Representative Lauren Boebert of Colorado has come under scrutiny for her ties to members of the Three Percenters, a radical militia group.

And before she was elected to Congress, Representative Marjorie Taylor Greene of Georgia endorsed executing Democratic lawmakers, including Speaker Nancy Pelosi. She was also an adherent of QAnon, the pro-Trump conspiracy movement that holds that a corrupt cabal of Democrats, global elites and career government employees who run a Satan-worshiping child sex-trafficking ring will soon be rounded up and punished for their misdeeds, and that Mr. Trump will be restored to the presidency. (Ms. Greene has since said she does not follow QAnon.)

Mr. Gosar has appeared at rallies across the country referring to President Biden as a “fraudulent usurper,” and called efforts to seat him “sedition” and a “coup.” Last week, Mr. Gosar came under scrutiny after a social media channel associated with Mr. Fuentes advertised an upcoming fund-raiser featuring both men. And in a recent fund-raising solicitation, he spread a groundless conspiracy theory that the F.B.I. may have been behind the Jan. 6 attack.

The statements and actions have not resulted in any punishment from House Republican leaders, who have largely declined to publicly reprimand those in their conference who espouse fringe beliefs or peddle misinformation. Representative Kevin McCarthy of California, the majority leader, told The Washington Post last week that Mr. Gosar had told him that the advertised fund-raiser was “not real.” A spokesman for Mr. McCarthy did not respond to questions about Mr. Gosar’s ties to Mr. Fuentes.

In contrast, Mr. McCarthy moved quickly to try to silence the most outspoken Republican critic of Mr. Trump: He purged Representative Liz Cheney of Wyoming from her leadership post for speaking out about the lies that fueled the Capitol riot and suggested that she could lose her committee assignments for joining Democrats in investigating it. 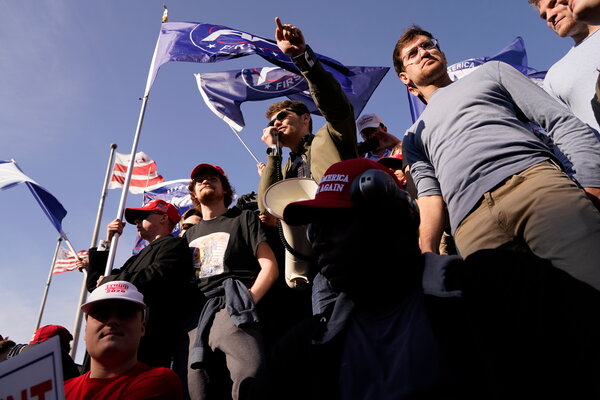 Mr. Fuentes, a 22-year-old white nationalist, online provocateur and activist who leads the America First movement, boasts the kind of résumé that most members of Congress would run from. Having marched at both the Unite the Right rally in Charlottesville, Va., in 2017 and outside the U.S. Capitol on Jan. 6, he has warned that the nation is losing “its white demographic core.” Other conservative organizations have denounced him as a Holocaust denier and a racist.

Mr. Gosar has continued to associate with him.

The Arizona Republican was the keynote speaker at a conference hosted by Mr. Fuentes’ group in February, the only member of Congress to participate. Mr. Gosar has spread America First’s motto and projects on Twitter and written to the F.B.I. on congressional letterhead in Mr. Fuentes’ defense. In return, Mr. Fuentes has praised the congressman on his show and social media channels and urged his followers to donate money to his campaign.

Mr. Gosar’s office did not respond to detailed questions about his ties to America First and other fringe groups.

First elected to Congress in 2010 as a strident conservative, Mr. Gosar has previously espoused conspiracies, cultivating a hard-right online base as a result. In an interview before he was elected, he declined to say whether he believed President Barack Obama was an American citizen. He falsely suggested in 2017 that the deadly far-right rally in Charlottesville was planned by liberals and funded by George Soros. More recently, he has questioned whether federal law enforcement officials planted agents in far-right groups that stormed the Capitol.

Mr. Gosar drew national attention in 2018, when six of his nine siblings endorsed his opponent, warning that his increasingly extremist views made him unfit for office. But he has seldom drawn serious challengers in his deeply conservative district and frequently coasts to re-election, including last year, when he won nearly 70 percent of the vote.

Still, even as he has grown more outspoken about his belief in fringe theories, Mr. Gosar has avoided mimicking the kind of explicitly racist language used by Mr. Fuentes — comments of the sort that sunk Steve King, a Republican former congressman from Iowa whose racist statements resulted in his removal from congressional committees, earned him rebukes from his own party and ultimately cost him his seat.

In a statement posted on Twitter last week responding to a wave of outrage about the advertised fund-raiser with Mr. Fuentes, Mr. Gosar sought to deflect the criticism by alluding to the charge by conservatives that under Mr. Biden — who has spoken out against systemic racism in the United States — the country’s institutions are becoming hostile to white people.

He denied that Mr. Fuentes’ group included “racial supremacists” and wrote that he was “Not sure why anyone is freaking out.”

“There are millions of Gen Z, Y and X conservatives,” Mr. Gosar wrote. “They believe in America First. They will not agree 100% on every issue. No group does. We will not let the left dictate our strategy, alliances and efforts.”

In February, appearing at Mr. Fuentes’ America First conference in Orlando as the keynote speaker, Mr. Gosar focused his remarks on immigration and censorship on social media. The rest of the event took a decidedly less restrained tone.

Mr. Fuentes warned that the nation would be lost if it “ceases to retain that English cultural framework and the influence of European civilization.” He showed a hype video featuring footage of the Capitol insurrection, then praised what he called the “hundreds of thousands of patriots” who stormed the building.

Other speakers included Mr. King, whose introduction video highlighted his past remarks that “we can’t restore civilization with somebody else’s babies,” and Michelle Malkin, a hard-right commentator, who spoke of “our endangered homeland” and the need to “destroy globalist phonies on the left and the right who are decimating our past.”

In addition to landing his movement the imprimatur of a sitting member of Congress, Mr. Fuentes has gained a powerful defender. In May, the Arizona Republican wrote to the F.B.I. on his official letterhead accusing the agency of abusing its power to relegate individuals to the no-fly list, singling out Mr. Fuentes and claiming that other “constitutionalists” and “patriots” were also being unfairly targeted.

Mr. Fuentes said that Mr. Gosar had been the only Republican lawmaker willing to do so.

“Almost nobody from the Republican Party had anything to say about it or felt concern,” Mr. Fuentes said on his show, adding that his attempt meet up with Ms. Greene had been rebuffed by her team.

The fringe is not an unusual place for Mr. Gosar. After the Capitol riot, he came under scrutiny for his ties to Ali Alexander, a far-right activist and conspiracy theorist who emerged as a leader of the “Stop the Steal” movement. Mr. Gosar frequently tagged him in Twitter posts, including ones urging his followers to “not accept a coup.”

At a rally in December outside the Arizona State Capitol at which Mr. Gosar spoke, Mr. Alexander called the congressman “the spirit animal of this movement.”

“He’s helped out where he could,” Mr. Alexander said. “He’s offered to call donors. We actually had our first D.C. march because he called me and he said, ‘You need to go to the Supreme Court.’ I said, ‘All right, my captain.’ And that’s what started that.”

In April, in response to an ethics complaint filed against him by Representative Pramila Jayapal, Democrat of Washington, Mr. Gosar defended Mr. Alexander, stating that his interactions with the activist had “revealed a devout Catholic” motivated “by an earnest search for the truth and love of his country.”

In the same document, Mr. Gosar also defended meeting in 2017 with the Oath Keepers, a right-wing militia whose members participated in the Capitol riot. During the meeting, the congressman told members of the group that the United States was in a civil war; “we just haven’t started shooting at each other yet.”

Mr. Gosar said he had addressed the Oath Keepers only because they had invited him to speak at their meeting. But he added that only “leftists” considered them an extremist group and pointed to their website, which describes them as “a nonpartisan association of current and formerly serving military, police and first responders” who vow to defend the Constitution.

Mr. Gosar then nodded to another false conspiracy theory circulated widely after Jan. 6: that far-left groups including Black Lives Matter had been behind it.

“If members of Antifa, B.L.M. or Oath Keepers broke into the Capitol,” he wrote, “they should be appropriately charged with trespassing, etc.”