BBC journalist appears to be chased by anti-lockdown protesters

Shocking footage shared on social media showed angry demonstrators shouting abuse in the face of Newsnight political editor Nicholas Watt near Downing Street. Mr Watt, who was wearing a BBC lanyard, was forced to run through the mob beyond a line of police officers as people shouted “traitor”, “liar” and “scum” at him. Crowds had gathered in Westminster on Monday to protest against the Government’s extension of coronavirus restrictions in England by four weeks.

After watching the footage the Prime Minister tweeted: “Disgraceful to see the hounding of Nick Watt doing his job. The media must be able to report the facts without fear or favour – they are the lifeblood of our democracy.”

“The video of BBC Newsnight’s Nick Watt being abused by a mob is appalling and distressing,” she said in a Tweet.

“This behaviour is never acceptable.”

She added: “The safety of journalists is fundamental to our democracy.

“This month the Government launched a consultation to better understand the nature and volume of threats and abuse against journalists who are operating in the UK.”

The BBC said in a statement: “This behaviour is completely unacceptable. 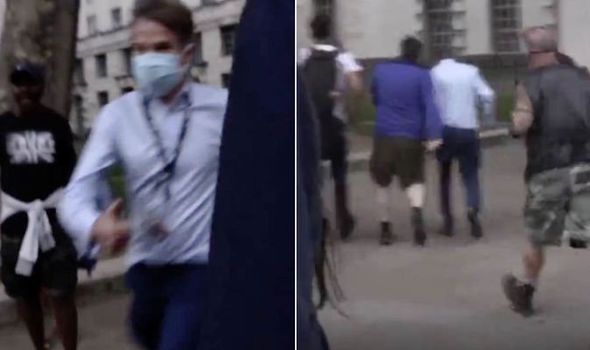 “All journalists should be able to carry out their work without intimidation or impediment.”

The Metropolitan Police said an investigation had been launched after a “number of possible offences” had been identified in the footage.

The force said in a statement: “We are aware of a video that has been shared online which shows a journalist being aggressively confronted and chased by a group of protesters in the vicinity of Whitehall on Monday June 14.

“The behaviour shown in the video is unacceptable. Members of the public, of any profession, have the right to go about their day without being subjected to verbal harassment or actions that put them in fear for their safety.”

Jo Stevens, Labour’s shadow culture secretary, said: “This extremely disturbing footage showing clear intimidation of a journalist while carrying out his job is absolutely unacceptable and should be condemned in the strongest terms.

“It is shocking that a BBC lanyard makes someone a target like this.”