The EU has triggered a Brexit clause less than a month after the UK left the bloc as Brussels panics over the coronavirus vaccine chaos involving a shortage of supplies from drugmaker AstraZeneca. The protocol, which forms a vital part of the Brexit Withdrawal Agreement with the EU, normally allows for free movement of goods from the bloc into Northern Ireland. It states goods should be able to move freely between the EU and Northern Ireland because the region still remains in the Single Market for goods and also operates under Brussels’ customs rules.

But the EU has now triggered Article 16 of this protocol to temporarily place export controls on this movement in respect of coronavirus vaccines.

This has sparked Ireland into urgent action, with Taoiseach Micheal Martin contacting Ms von der Leyen to express concern over the move.

A spokesman for the Irish Prime Minister said: “We are aware of the issue and the Taoiseach (prime minister) is currently in discussions with European Commission President Ursula Von Der Leyen to express our concerns.”

Ireland’s Foreign Minister Simon Coveney tweeted: “We are working with the EU Commission to try to resolve this issue and protect the integrity and operation of the NI Protocol.” 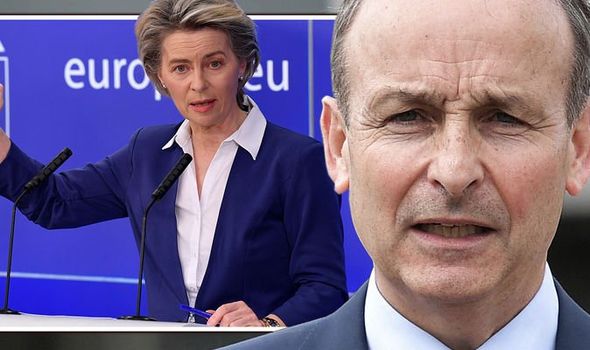 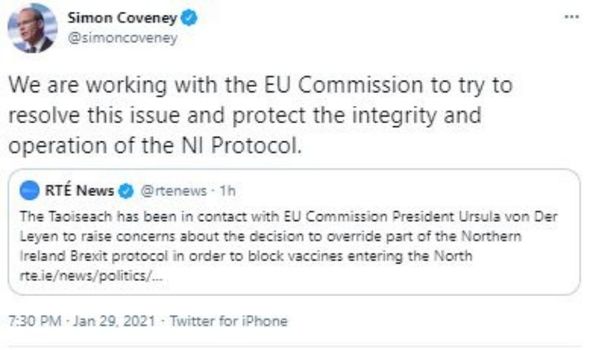 JP Campbell, the BBC’s business and economics editor for Northern Ireland, tweeted: “Very strong sense that the Commission blindsided the British AND Irish govts on Article 16.

RTE Europe Editor Tony Connelly tweeted: “The Irish government was not alerted by the European Commission of the decision to trigger Article 16 of the NI Protocol as part of its launch of the vaccine transparency mechanism, @rtenews understands.

“Officials have spoken of their “shock” and “concern” at the move. The Taoiseach Micheal Martin has spoken by phone to @vonderleyen “more than once”.

“Officials suspect the Commission’s Brexit Task Force was not alerted to the move, or was alerted “late in the day”. Maros Sefcovic, who chairs the Joint Committee implementing the NI Protocol has been in touch with Michael Gove, his opposite number, it’s understood. 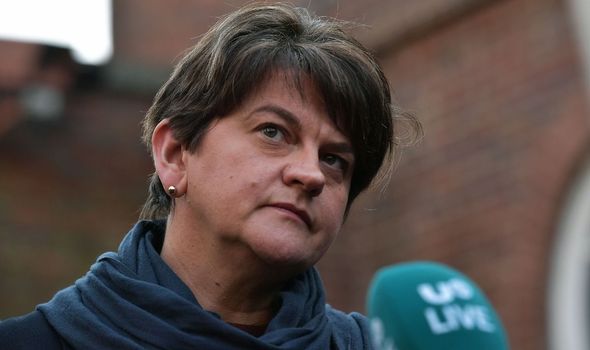 “Dublin’s understanding is that because the Protocol prohibits any export ban for EU goods entering NI, but also provides for unfettered access for NI GB goods, it was seen as a potential loophole.

“The European Commission has announced a new transparency mechanism allowing member states to monitor if vaccine doses which are contractually destined for member states are instead exiting the EU.

“Irish officials believe the use of Article 16, which provides for either side to take safeguard measures if there are significant societal or economic consequences is inappropriate in this situation as the idea of vaccines entering the UK via the NI backdoor as “far fetched”.

“However, Dublin is fully aware that the shortfall in AstraZeneca vaccines is also a crisis for member states, not least Ireland. The view is that the NI Protocol has got inadvertently swept up in the broader vaccine crisis. 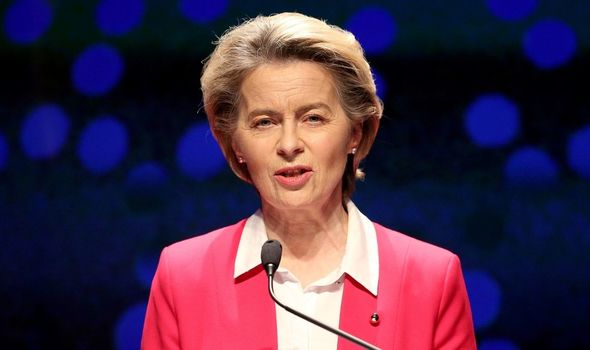 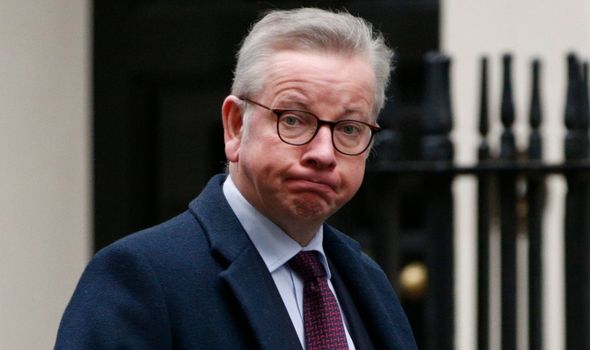 “Sources say the government is seeking a solution to the issue and that the  Taoiseach has conveyed to VDL the implications of the move and the sensitivities around the Protocol in NI, ie that Article 16 is not appropriate in this scenario.”

The move to activate Article 16 will frustrate any effort to use Northern Ireland as a back door to bring vaccines into Great Britain.

Stormont First Minister Arlene Foster said: “By triggering Article 16 in this manner, the European Union has once again shown it is prepared to use Northern Ireland when it suits their interests but in the most despicable manner – over the provision of a vaccine which is designed to save lives.

“At the first opportunity, the EU has placed a hard border between Northern Ireland and the Republic of Ireland over the supply chain of the coronavirus vaccine.”

UK Cabinet Office minister Michael Gove has spoken to his counterpart on the EU-UK joint committee, Maros Sefcovic, to “express the UK’s concern over a lack of notification from the EU about its actions in relation to the NI protocol”. 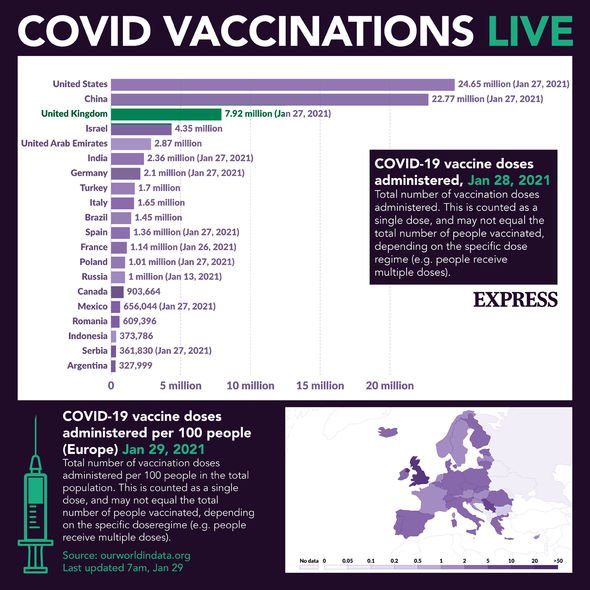 Downing Street added in a statement: “The UK Government is urgently seeking an explanation from the European Commission about the statements issued by the EU today and assurances as to its intentions.

“The UK has legally-binding agreements with vaccine suppliers and it would not expect the EU, as a friend and ally, to do anything to disrupt the fulfilment of these contracts.

“The UK Government has reiterated the importance of preserving the benefits of the Belfast/Good Friday agreement and the commitments that have been made to the two communities.”

Euronews political editor Darren McCaffrey, tweeted: “EU decision to invoke Article 16, clearly without prior notice has managed to unite the British and Irish governments, Labour, the DUP and SDLP in disagreement with the move. When did that last happen?”

This sparked a response from Brexiteer Martin Daubney, who wrote: “It’s also united & emboldened the entire Eurosceptic movement in one fell swoop.”

The EU has repeatedly lashed out at vaccine maker AstraZeneca for failing to deliver the shots it had promised, with the bloc facing a shortfall of up to 60 percent until the end of March.

In a further blow, EU member states are also receiving fewer deliveries of the vaccines from Pfizer-BioNTech and Moderna than anticipated.

On Friday, the European Commission revealed it had agreed a plan to control the exports of vaccines from the continental bloc as part of measure to ensure its own supplies.

They will initially last until the end of March and will apply to Covid vaccines the bloc has already purchased.

The EU could choose to block the export of a vaccine if they believe this could undermine its own supplies.

The Commission has been quick to stress this is not an export ban of any kind.