Mr Martin said: “While Prime Minister Johnson and I engaged actively together, we didn’t always agree, and the relationship between our governments has been strained and challenged in recent times. Referring to a 1998 Northern Ireland peace deal he added:”We now have an opportunity to return to the true spirit of partnership and mutual respect that is needed to underpin the gains of the Good Friday Agreement.” 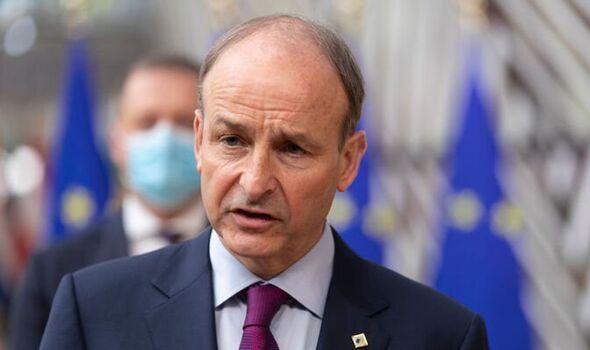 Mr Martin said: “Prime Minister Johnson has led the British Government during an especially challenging period, including dealing with the impact of Covid-19 and the response to the war on Ukraine.

“From a personal perspective, I am conscious that he has been through a difficult few weeks and I extend my best wishes to him and his family for the future, following the announcement of his resignation.

“Britain is Ireland’s closest neighbour and the relationships between our two countries are long, deep and enduring.”

“Our two governments working in close partnership is a key underpinning for peace and prosperity on these islands.

While he and Mr Johnson had “engaged actively together”, their problems in finding common ground had strained relations between the UK and Ireland, Mr Martin acknowledged.

He explained: “Our joint responsibilities concerning stewardship of the Good Friday Agreement, as well as nurturing broader bilateral relations between us, require us to work together in a spirit of respect, trust and partnership.

“That is more important than ever today and I would once again urge a pulling back from unilateral action, whether that be on dealing with the legacy of the past, human rights, or the Northern Ireland Protocol.”

Mr Coveney tweeted: “The Irish government stands ready to work with a new UK PM on protecting our shared achievements in the peace process and our shared responsibility under international law on Brexit.

“Let’s start with getting a government in Stormont. I wish Boris Johnson and his family well.”