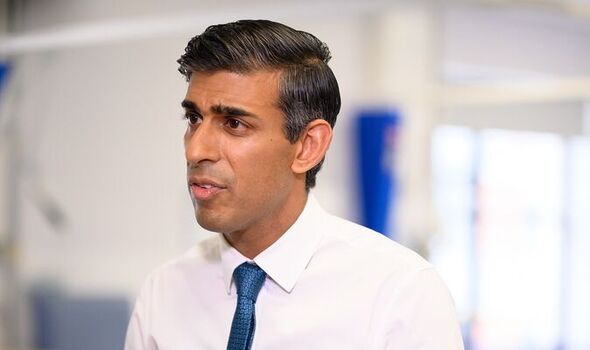 The Prime Minister ruled out any reductions in health service funding and will stick to his promise to funnel in an extra £13 billion a year for covid backlogs and social care. But the extra cash will have to be found from other departments because the 1.25 percent hike in national insurance to pay for it was reversed by Liz Truss.

Treasury insiders said the black hole in the nation’s finances is “even bigger” as a result of the move.

“It’s going to be quite grim for a lot of people because of it,” a Whitehall source said.

The social care cap could be delayed by at least a year to make more savings of £1 billion a year.

Under Boris Johnson’s plan, an £86,000 cap on the amount anyone in England will need to spend on their personal care over their lifetime is due to come in from October next year.

Anyone needing social care currently has to pay until their savings and assets have dwindled to £23,250.

Underspending terms agreed last year, NHS England funding is expected to rise from £151.8billion this financial year to £157.4 billion in 2023/24 and £162.6billion a year later.

“We are not cutting the NHS budget,” the source said.

Mr Sunak told the Cabinet the NHS would be “prioritised” when “difficult decisions” are taken on spending over the coming weeks.

The Prime Minister and Chancellor Jeremy Hunt are planning tax hikes that will hit everyone and a squeeze on spending to address a black hole of up to £50 billion in the public finances.

Downing Street said Mr Sunak told ministers the Government “would always support the NHS and that they would continue to be prioritised as difficult decisions are taken on spending”.

But the government does want to see “efficiencies and reform” in return in poorer performing services.

It is understood ministers believe there is a need to make sure NHS managers are accountable for performance when huge amounts of public money is being spent on the health service at a time of spending cuts.

There is concern that delayed discharges, ambulance waiting times and patient outcomes can differ significantly across the country.

Bed blocking is said to be a big problem in around 30 percent of hospitals rather than a nationwide issue.

A taskforce to tackle NHS covid backlogs is one option being considered.

Mr Sunak and his senior ministers discussed funding for the NHS as they braced for a fresh winter crisis if covid and flu take hold.

The Prime Minister said that in return for protecting the NHS budget “it was right to look at further ways to improve the service the public receive and that he was confident this could be achieved,” according to a Downing Street spokesman.

“The Health Secretary has highlighted that there are discrepancies in performance across the NHS and we want to focus on how we further ensure all parts of the NHS are performing as well as they can because we do see discrepancies spread out across the country.”

The spokesman said there were discrepancies in terms of health outcomes and performance rates.

“There are a number of issues that need addressing. We are providing significant funding to our health service and the public would expect that we make sure that we’re spending that money carefully.”

The Treasury is working to a “central assumption” that public sector pay will go up by around two percent.

But sources said it would be up to departments to negotiate with independent pay review bodies next year.

It would allow them to impose higher pay settlements but they would have to find the cash from within their existing budget allocations.

Protecting the NHS means significant cuts will have to be made elsewhere as Mr Sunak tries to fill the financial blackhole.

Around half is expected to come through spending cuts and the rest through tax rises in the autumn statement on November 17.

Mr Sunak and Mr Hunt are planning to freeze income tax thresholds for years to come to save billions of pounds.

Former Bank of England deputy governor Sir Charlie Bean warned that “all the low-hanging fruit” has already been picked on public spending.

“We are at the point where governments have to recognise they can’t do this by efficiency savings. All the low-hanging fruit was picked during the austerity years,” he told an event hosted by the Resolution Foundation think tank about the upcoming autumn statement.

“You can only really keep spending down if you’re prepared to change the view of what the public sector should be doing.

“And that’s what we ought to be having a debate about.”

Rachel Wolf, who wrote the 2019 Conservative manifesto, said it will be “almost impossible” to deliver on the document’s “central promises” of boosting public funding and better public services

“When you look at what has happened to those voters now, before we get to these autumn statement choices, it’s pretty bleak,” she said.

“This is not Rishi Sunak’s fault, he warned against it. It going to be very, very difficult for him to sustain over the next two years any hope of a majority or a victory next time because, fundamentally, it will be too easy to lay the blame of this at the Conservatives’ door.

“Because all of the instincts of the Conservative parliamentary party remain in the kind of slightly traditional ‘freeze public spending, don’t raise taxes’ space which is not really necessarily where their voters are.

“I think that the actions they’ll take in the autumn statement will say as much about their political strategy as it does about their economic one.”