At least thirty Just Stop Oil protestors have been arrested during a climate change protest near Lambeth Bridge in London after blocking traffic and glueing themselves to the road. Brexit Party leader Richard Tice happened upon the demonstrators and filmed footage of police moving into dislodging the eco-activists from the busy route.

Mr Tice said: “Well, here we are. It’s a Wednesday afternoon and there’s about 30 Just oil folk who are blocking the road. They’ve been here for some time. They claimed to be glued.

“The quantity of police officers having to look after them is extraordinary. It’s about 20. There was dozens down the road, here they come marching up.

“Dozens and dozens more police officers, bands over there. This is a massive operation.

“These police should be catching criminals preventing crime. Unfortunate wasting their time with these selfish protesters.” 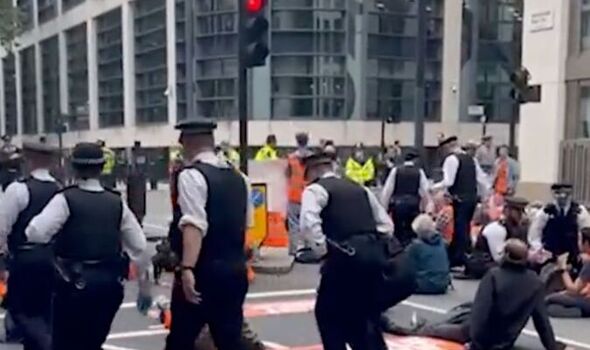 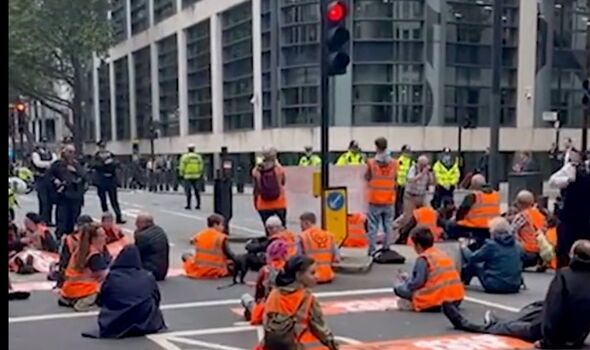 It comes after Greenpeace activists staged a protest during the Prime Minister’s conference speech on Wednesday, brandishing a flag reading “who voted for this?”.

The protesters, ejected from the hall shortly afterwards, interrupted Liz Truss’s televised leader’s speech at the Conservative Party conference in Birmingham to protest plans that Greenpeace said nobody voted for.

Ms Truss could be heard saying “let’s get them removed”, before being roundly cheered and applauded by party members as the protesters were led away.

Greenpeace quickly confirmed that it was behind the demonstration, accusing the new Prime Minister of “shredding” the promises made in the 2019 manifesto.

In a statement Rebecca Newsom, one of the protesters and Greenpeace head of public affairs in the UK, elaborated on the message set out on the flag.

“In a healthy democracy, people should get the government programme they voted for, but Liz Truss is putting most of it through the shredder,” she said.

She was joined in the protest by Greenpeace policy officer Ami McCarthy.

“What they’re getting instead is fracking, a potential bonfire of rules on wildlife and nature protection, and now the prospect of benefit cuts.

Military aircraft catches fire and explodes during landing in Crimea [VIDEO]
‘Our models show Kwarteng budget will boost output by £100 BILLION’ [COMMENT]
Putin raises the stakes dramatically, we should not underestimate him [ANALYSIS] 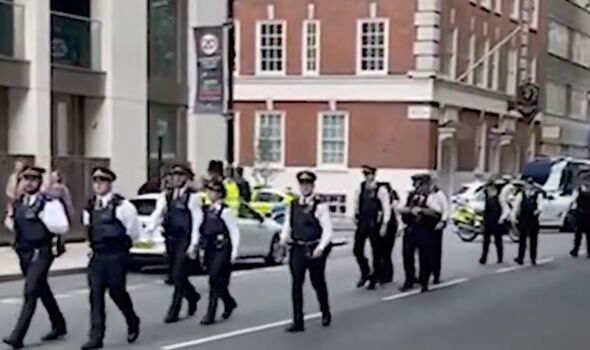 “Broken promise after broken promise, the Prime Minister is quickly turning her party’s manifesto into the longest piece of false advertising ever written.

“Many will be left wondering whether her Government answers to the public or to the hedge fund managers, right-wing think tanks and fossil fuel giants that are cheering it on.

“The Chancellor said the Government is now listening.

“If so, they may want to pay attention to the widening chorus of leading businesses, energy experts, former Conservative ministers and even the US president telling them to go in the opposite direction.”