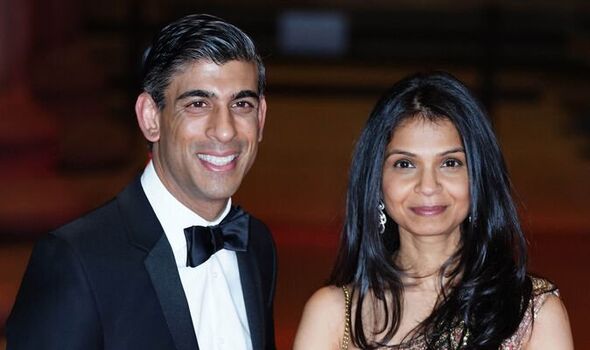 Akshata Murty, estimated to be worth hundreds of millions of pounds, is registered as non-domiciled, which means she is not legally obliged to pay tax in Britain on foreign income. Labour said Mr Sunak has “very serious questions” to answer over his family’s finances. But Mr Johnson said: “I think it is very important in politics if you possibly can to try and keep people’s families out of it.

“What I will say is that Rishi and I are working very hard on a massive long-term British energy security strategy. That is what we are focused on.”

Ms Murty, the fashion designer daughter of a billionaire, married the Chancellor in 2009.

She insisted she pays taxes on all UK income and said the set-up is required because she is an Indian citizen.

Labour leader Sir Keir Starmer said Mr Sunak could be guilty of “breathtaking hypocrisy” if his wife is reducing her own tax bill as the Chancellor increases National Insurance for millions of Britons.

It is understood Mr Sunak declared his wife’s tax status when he became a minister in 2018.