Home » Politics » Labour in crisis as Keir Starmer plunges in polls – is this the end? ‘Starmer is finished’

Keir Starmer claims he would 'knock over' Boris Johnson

Sir Keir Starmer took over leadership of the Labour Party in April of 2020, after the December 2019 general election saw Jeremy Corbyn plunging the party into a record-breaking loss. However, polling is now showing that, despite an uptick in support after Sir Keir took the helm, support for both the party and the leader himself is waning.

A look at the POLITICO poll of polls paints a damning picture for Labour.

The poll aggregates data from multiple sources to give an average, and accurate, picture of opinion polling over time.

The national parliament voting intention – ie, how people would vote if an election was held tomorrow – shows Labour has plummeted in support.

The latest aggregate gives Labour just 32 percent of the vote, the same number polled at the time of the last disastrous general election. 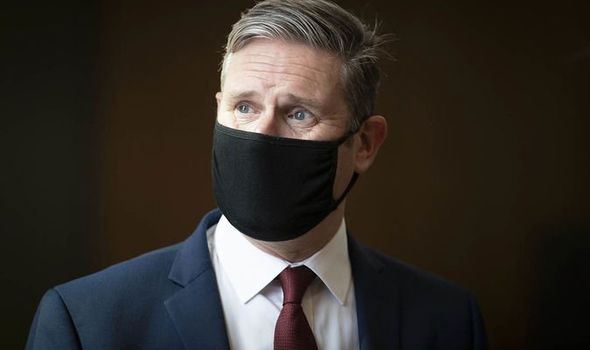 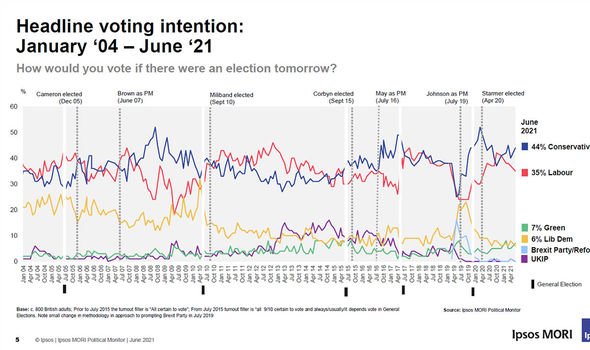 The Tories sit on 43 percent, putting both parties on the same footing they saw in 2019.

And a look at the graph shows that, while the gap between Labour and the Conservatives narrowed after Sir Keir took office, it has now opened up widely once more.

This yawning gap in support between the two parties has been the source of much head-scratching within the highest ranks of the Labour Party over the past year. 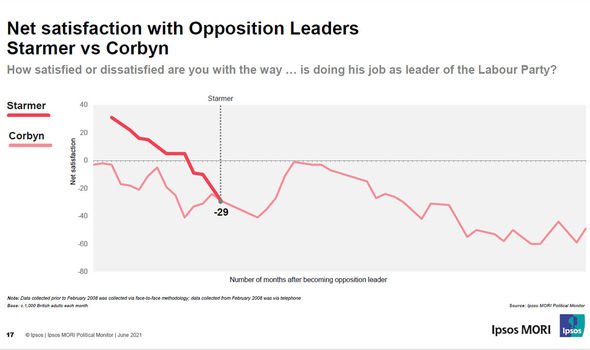 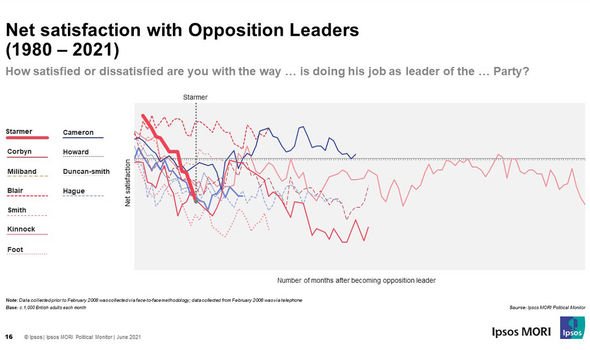 Another recent poll, conducted for the Evening Standard by Ipsos MORI, shows support for Sir Keir has plummeted to Corbyn levels, too.

Ipsos MORI’s June 2021 Political Monitor interviewed 1,002 adults across GB by phone, from May 28 to June 3, and all data are weighted.

This poll showed just one in five Britons are satisfied with the job the Labour leader is doing, and net satisfaction ratings for Sir Keir are similar to those achieved by Mr Corbyn.

Britons are more likely to think Boris Johnson (with 45 percent) and Manchester mayor, Labour’s Andy Burnham (on 37 percent) have “what it takes to be a good PM” than Starmer (with just 24 percent).

Sir Keir’s overall net rating has plummeted to -29, the same as the one Jeremy Corbyn received 14 months into his time as Labour leader.

However, Corbyn would later fall as low as -60 later in his leadership. 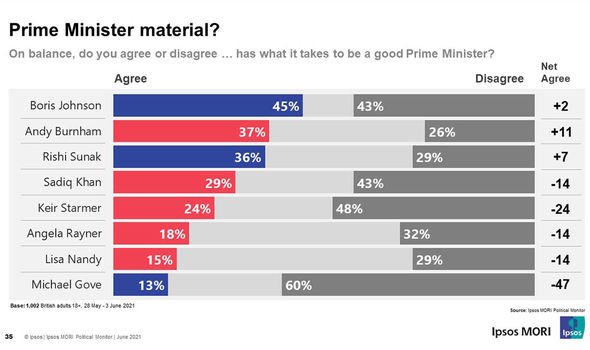 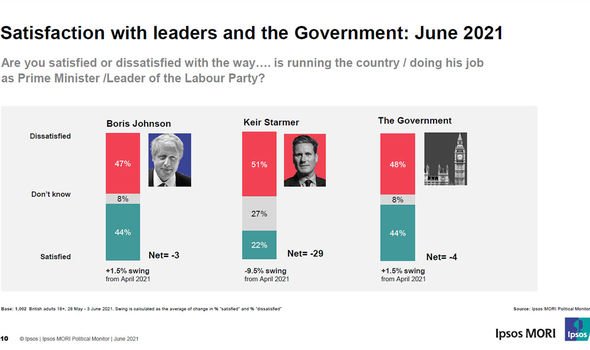 And it seems some Twitter users aren’t convinced Sir Keir is the right man to lead the party to victory.

One wrote: “Wait until he loses the Batley and Spen by election on July 1st.”

Another said: “Labour is going through one of its regular self-destructive bouts although this might be the terminal one. Nobody knows what Labour stands because it is two parties in one; a ‘working class’ party and virtue-signaling metropolitan elites who intensely dislike the working class.”

A third added: “I guess this is what happens if you tell Remain voters that you now support Brexit and Leave voters don’t believe that you now accept Brexit. Unfortunately, Starmer is finished.”

One person tweeted: “I didn’t know much about Keir Starmer except taking over in the Labour Party but being on a recent edition of Life Stories we saw a caring humble articulate politician but is he a viable opposition?”

Sir Keir’s scores contrast with Boris Johnson’s healthier figures, which include 78 percent satisfaction in him among Conservative supporters.

Only 40 percent of the public think the Tories should change leader before the next election, and just 22 percent of Conservatives.

“From opening with the best satisfaction ratings for a Leader of the Opposition since Blair last June his numbers are now as bad as Jeremy Corbyn’s at the same point in his leadership.

“What we don’t know is whether Starmer’s numbers will continue to fall, as they did for Corbyn, or if the Labour leader will manage to rebound all the way to Number 10 in a similar fashion to how David Cameron once did.”

What do you think will happen to Labour next? Have your say in the comments below.