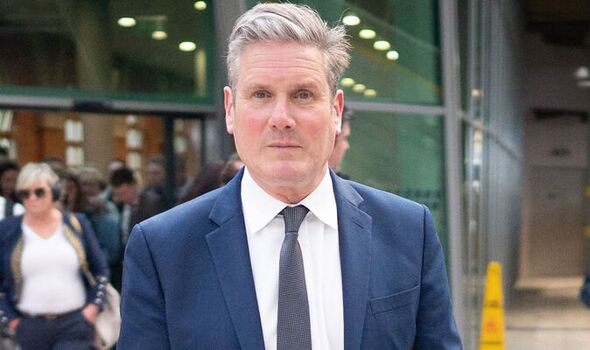 Ministers will on Monday unveil a Bill in Parliament to override elements of the Northern Ireland Protocol to ease trade frictions.

The Government said it was passing the legislation as a safeguard in case talks with the EU fail to yield results.

Brussels has been accused of being heavy-handed in imposing customs checks as part of the Protocol, undermining the integrity of the UK’s internal market.

Unionists fear Northern Ireland’s place as part of the United Kingdom is at risk if the Government fails to take action.

Failing to fully address the concerns of those living in the province, Sir Keir said during a visit to Belfast today: “We will vote against the legislation the Government is putting before parliament.

“We think it is the wrong approach.

“I’m not pretending there aren’t issues and challenges with the protocol, of course there are.

“We have been listening to the political parties here, to communities, to business groups. I think those challenges can be overcome around the negotiating table with statecraft, with high levels of trust.

“It is that high level of trust that is missing with this Prime Minister and I think he is making a mistake by going down the route of legislation which will breach international law and, actually, I think, be an impediment to the negotiations that, in the end, are going to resolve these difficult issues.”

Ministers say the Bill would address the concerns of the EU as well as those raised by Unionists.

The legislation is expected to include measures to create a “green lane! for trade from Britain, with checks on cargo limited if goods are set to remain in the UK.

Any firm found to be exploiting the system to smuggle goods into the EU via Northern Ireland’s land border with the Republic in the south would face heavy fines.

On a visit to Belfast today, Sir Keir’s first since becoming Labour leader, he pledged to axe laws designed to unilaterally override aspects of Brexit’s Northern Ireland Protocol if he won the next election.

“We would scrap the legislation and I think there has been an impasse in the negotiations because we haven’t seen the high levels of trust that we need for negotiations like this, not least from our Prime Minister,” he said.

“But also we need give and take on both sides.

“The EU, as well as the UK, to give and take, to be flexible about the approach.

“I do not think that the remaining issues of the protocol cannot be resolved with a different approach, with that high level of trust, with an honest broker prime minister getting people around the table and negotiating what needs to be negotiated.”