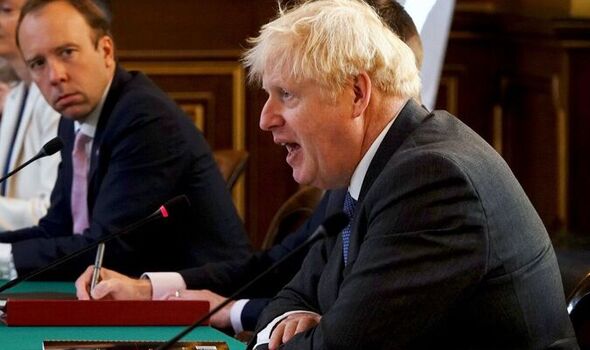 The UK and the EU were in a tense stand-off in January 2021 when continental figures attempted to shift blame for their slower jab rollout. Millions of vaccines were being exported from the continent as its people were slating their leaders for failing to provide enough supplies.

The UK had ordered 40 million doses of the Belgium-made Pfizer jab by December 2020 – enough to vaccinate 20 million people.

Mr Hancock said: “When I got to the Cabinet room, the PM practically had smoke coming out of his ears.

“He was in full bull-in-a-china shop mode, pacing round the room growling. What really riled him was the fact that only last night he was speaking to Pfizer chief executive Albert Bourla, and Bourla made no mention of it!

“I was wary: when the PM is in this mood, he can really lash out. I knew I’d need to be as diplomatic as possible if I wanted to avoid getting caught in the crossfire.”

The ex-Health Secretary reveals in his Pandemic Diaries that three days later Pfizer “relented”. He said: “Following a robust exchange between Bourla and the PM, lo and behold, they’ve located an ’emergency supply’, which is now heading our way.” The EU then tried to pressure the UK and pharmaceutical firms by initiating an “export ban” – before a “humiliating climbdown”.

He added: “The EU Health Commissioner has tweeted that ‘in future’ any company that produces vaccines in the EU will have to provide ‘early notification’ if they want to sell it to a third-party country.

“In other words, they’ll need permission. Totally desperate stuff!” Two days later he added: “A humiliating climbdown from the EU. It followed frantic diplomacy on our side, plus our lawyers confirming they would not be able to block our supply.”

The UK was the first country to approve a Covid-19 jab in December 2020. EC President Ursula von der Leyen admitted the bloc was late authorising the formula.

Mr Hancock’s Diaries also claim Baroness Betty Boothroyd rang his office to demand a jab. He was also forced to call Sir Geoffrey Boycott to persuade him that delaying a second injection would work.

But Mr Hancock was raging after both then gave interviews slamming the Government’s vaccine rollout.