WASHINGTON — Senator Lisa Murkowski said on Sunday that she would not support a confirmation vote to fill the Supreme Court vacancy left by the death of Justice Ruth Bader Ginsburg before the November election, becoming the second Republican senator to voice an objection and potentially complicating efforts to swiftly fill the seat.

Ms. Murkowski, a moderate from Alaska who often acts independently of her party, has long said that she would not support a vote in a presidential election year. But her decision to reaffirm that stance as President Trump moved toward selecting a pick underscored how tenuous an effort to seat a nominee less than two months before the general election is.

Within hours of the announcement of Justice Ginsburg’s death on Friday, Senator Mitch McConnell of Kentucky, the majority leader, vowed that the Senate would vote on Mr. Trump’s nominee for the seat. But Mr. McConnell and his top lieutenants, even as they lay the groundwork for a bitter political spat over a lifetime seat on the nation’s highest court, have yet to say whether the Senate will act before Nov. 3 or instead seek to include the vote in the unfinished business lawmakers will address in the weeks after the election.

With Ms. Murkowski joining Senator Susan Collins, a Maine Republican entangled in a tough re-election campaign, in resisting a confirmation vote before the election, Mr. McConnell can afford to lose the support of only two more Republicans, given the slim 53-to-47 majority his party maintains in the Senate. (Vice President Mike Pence can break a tie.)

Former Vice President Joseph R. Biden Jr., the Democratic presidential nominee, pleaded with the “handful” of Senate Republicans “who really will decide what happens” to “follow your conscience” and not fall in line with Mr. Trump and Mr. McConnell’s efforts to quickly fill the vacancy.

“Don’t go there,” Mr. Biden said at an event in Philadelphia. “Uphold your constitutional duty, your conscience. Let the people speak. Cool the flames that have been engulfing our country.”

But Senator Lamar Alexander of Tennessee, a retiring Republican who was considered by many to be a strong defender of Senate traditions, said on Sunday that he would support an effort to confirm Mr. Trump’s pick.

“No one should be surprised that a Republican Senate majority would vote on a Republican president’s Supreme Court nomination, even during a presidential election year,” Mr. Alexander said in a statement. “The Constitution gives senators the power to do it. The voters who elected them expect it.”

“Senator McConnell is only doing what Democrat leaders have said they would do if the shoe were on the other foot,” he added. 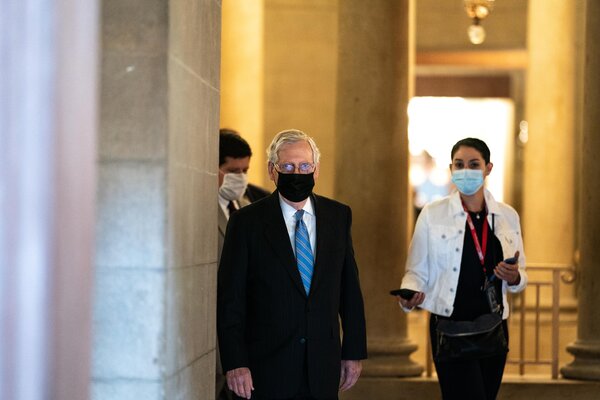 But Ms. Murkowski held firm to her position — and that of many other Republicans from 2016.

“For weeks, I have stated that I would not support taking up a potential Supreme Court vacancy this close to the election,” Ms. Murkowski said in a statement. “Sadly, what was then a hypothetical is now our reality, but my position has not changed.”

“I did not support taking up a nomination eight months before the 2016 election to fill the vacancy created by the passing of Justice Scalia,” she said, referring to Justice Antonin Scalia, who died in early 2016. “We are now even closer to the 2020 election — less than two months out — and I believe the same standard must apply.”

In her statement, Ms. Murkowski made no mention of how she believed the Senate should handle a confirmation vote in the lame-duck session, the weeks between Election Day and the adjournment of Congress when lawmakers can act on unfinished business. Ms. Collins said in a statement that she believed the victor in the presidential election should ultimately fill the seat, even if Mr. Trump has put forward a nominee.

Several other Republicans who resisted confirming Merrick B. Garland, President Barack Obama’s choice for the Scalia vacancy, are now arguing that the Senate should vote to confirm Mr. Trump’s nominee and sought on Sunday to deflect charges of hypocrisy.

“A big part of the reason they elected Donald Trump is because of the Scalia vacancy, and they wanted principled constitutionalists on the court,” Senator Ted Cruz, Republican of Texas, said on ABC’s “This Week.” “And the big part of the reason why we have a Republican majority, elected in 2014, re-elected in 2016, grown even larger in 2018, a major issue in each of those elections is the American people voted and said, ‘We want constitutionalist judges.’”

Because the 60-vote threshold for most judicial nominees was abolished in 2013 and for Supreme Court nominees in 2017, Senate Democrats have no means of blocking a confirmation vote.

Instead, Democrats in both chambers sought on Sunday to pressure Republicans by framing the fight as a battle over health care in a nation ravaged by the coronavirus pandemic. The court is set to begin arguments in a case seeking to invalidate the Affordable Care Act a week after Election Day, and eliminating the act could wipe out coverage for as many as 23 million Americans.

“He doesn’t want to crush the virus. He wants to crush the Affordable Care Act,” Speaker Nancy Pelosi of California said Sunday on “This Week.”

“We have our options,” she added. “We have arrows in our quiver that I’m not about to discuss right now, but the fact is we have a big challenge in our country.”

Focusing on health care, as opposed to hot-button issues like abortion and guns that usually frame judicial confirmations, is a rerun of the successful playbook that helped power the Democratic takeover of the House in 2018 and holds true to Mr. Biden’s promise to defend the Obama administration’s landmark health care law. There were continuing signs that the looming confirmation fight was motivating Democratic donors on Sunday: ActBlue, the donation-processing site, announced that small-dollar donors had contributed $100 million since Friday night.

It remains unclear, however, whether enough Republicans will be swayed.

“This should take as long as it needs to take, but no longer — there is plenty of time to get this done,” Senator Roy Blunt, Republican of Missouri, said on “Face the Nation.” “But to get it done before Election Day, everything has to work, I think, pretty precisely.”