Navy officials insist that they are doing everything short of Saran-wrapping the ship to try to keep it virus-free. 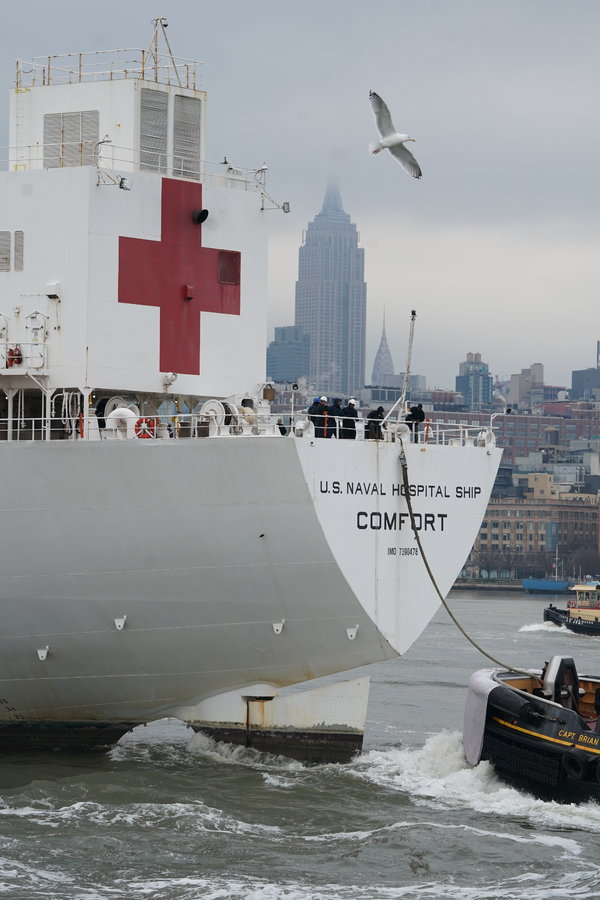 By Helene Cooper and Thomas Gibbons-Neff

WASHINGTON — The enormous hospital ship U.S.N.S. Comfort arrived in New York Harbor Monday morning, a gleaming white beacon of hope for a besieged city as it fights the novel coronavirus.

But in sending a Navy hospital ship to join the battle against a pandemic, military officials have taken a huge and calculated risk: Can a ship, the type of vessel where viruses have been shown to spread with frightening ease, actually remain safe from the infection raging just outside its berth at Pier 90 at Manhattan Cruise Terminal?

Navy officials do not plan to treat people with coronavirus aboard the Comfort. The mission is to take patients with other medical problems to relieve New York hospitals overrun by virus patients. But it is not as if the ship’s medical personnel can quarantine patients for two weeks before they accept them on board for treatment.

Navy officials, aware that all it would take is one positive case to turn the Comfort from rescue ship to floating petri dish, insist that they are doing everything short of Saran-wrapping the ship to try to keep it virus-free.

“We will establish a bubble around this ship to make sure we’re doing everything to keep it out,” Capt. Joseph O’Brien, commodore of Task Force New York City, said in an interview from the Comfort on Sunday.

That has meant almost sequestering the ship’s crew of 1,200 for the past two weeks to lessen their chances of contracting the virus, he said. The ship closed its workout rooms days ago, and the crew members have been practicing social distancing — at least, as much as they can in the confined quarters of a ship. Because the crew is composed of medically trained personnel, the learning curve on wiping down and disinfecting constantly is not as high as it might be.

But there remain challenges. Take President Trump’s visit on Saturday.

The president showed up to send off the Comfort in a show of national unity in a crisis. Normally, he and an entourage of staff members, reporters, handlers and photographers would have boarded the ship, and puffed up a few of those narrow staircases to see the bridge and tour an operating room. But not this time.

Neither Mr. Trump nor Defense Secretary Mark T. Esper, accompanying him, went aboard, and the president spoke from a lectern at the pier, with the ship behind him, then waved as it went out to sea. The fear of contaminating the hospital ship outweighed the benefits of a photo op.

“Bringing people onto a ship is inherently risky,” Capt. Patrick Amersbach, commanding officer of the medical personnel aboard the Comfort, said in a telephone interview from the ship. “So we have to be overly cautious.”

But within the striking white and red hull of the Comfort, some of the crew members say they are scared that they are tempting fate by dropping anchor in New York harbor. As of a week ago, the crew had not been informed of the screening procedures for patients coming aboard, other than temperature checks, according to one person aboard the Comfort familiar with the situation.