She said there was a “need for urgent action to support households facing the worsening cost of living crisis”. Policy areas such as taxation, health, and the economy are all devolved to Holyrood.

However, admitting the matter was too big for Scotland to fix on its own, Ms Sturgeon urged Mr Johnson to call a meeting of the Four Nations’ Heads of Government Council as soon as this week.

The Scottish First Minister said the Scottish Government “cannot respond on the scale required without action by your Government” as she asked for the Prime Minister to intervene.

She wrote: “While we will continue to take all actions available to us within devolved responsibilities and budgets – the Scottish Government is investing almost £3billion this year in a range of measures which will help address the cost of living pressures – it is a statement of fact that many of the levers which would make the biggest difference lie with the UK Government.

“It is also the case that only the UK Government can access and make available the resources on the scale required. 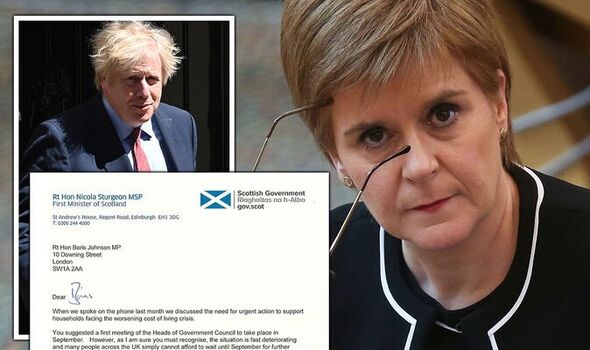 “Therefore, actions by devolved governments alone – though important – will not be enough to meet the unprecedented challenges we face.

“Action is needed now to address significant gaps in help for households, in particular those on low incomes, who are increasingly vulnerable to the impact of rising household costs.

“However, it is also vital, given further increases to energy bills due to be announced later this month, that a substation plan be developed now to avert and mitigate what will otherwise be a crisis of unprecedented proportions.”

The Four Nations’ Heads of Government Council had been due to next meet in September by which time a new Prime Minister would be in place.

Her letter was sent today after the Bank of England announced projections last week that could see inflation rise above 13 percent in October, while another projection found that the energy price cap could rise to £3,358 annually from October, and could hit £3,615 from January.

The SNP leader joins calls from both Labour and the Liberal Democrats for Mr Johnson to take imminent action.