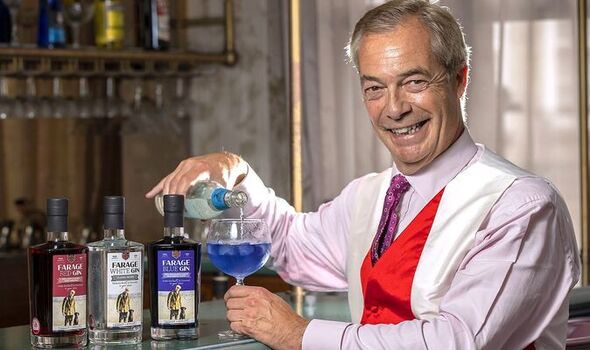 Now he is inviting fellow imbibers to enjoy the “taste of Brexit” with a trio of artisan tipples coloured, naturally, red, white and blue. His Farage Gin range includes spirits flavoured with British cherries, a classic white gin, and one featuring the botanical tang of gardenia flower.

Each 70cl bottle packs a not-for-the-faint-hearted punch of 42 percent ABV and costs £40.

It is produced by a distillery in Cornwall – his favourite county – using pure local spring water and naturally occurring sugar and all are hand bottled in small batches.

And Mr Farage, 58, promised a gift-wrapped bottle would be winging its way to his arch-nemesis, just in time for Christmas.

The former leader of Ukip and The Brexit Party, said: “Jean-Claude Juncker [former President of the European Commission] was a pleasant human being, despite the fact he didn’t agree with my position.

He deserves a bottle and one will be on its way to Luxembourg. I can’t quite say the same about [European Parliament Brexit negotiator] Guy Verhofstadt, so he won’t be getting one. “And Donald Trump is teetotal.

“I hope when people give this as a present to Brexiteers it brings a big smile. And if it’s given to Remainers, well I hope it makes the family laugh.”

Political visionary Mr Farage realised a lifetime’s work when the curtain finally fell on the UK’s 47-year membership of the EU in 2020.

He realised a 25-year dream when Britain voted “out” in the 2016 referendum, but admitted victory had come at a huge personal cost.

Mr Farage divorced, remarried, split from his second wife, beat cancer, survived a plane crash and an attempt on his life – all while campaigning for the UK to quit the bloc.

But he said he sacrificed everything because no one else would have stood up and answered the most important political question of our lifetime.

Throughout his personal crusade he received death threats, including one suspected attempt on his life when wheel nuts on his car were loosened, causing it to crash on a motorway.

During the 2010 general election, standing against John Bercow in Buckinghamshire, he was in a light aircraft pulling a Ukip banner when it crashed, leaving him with two fractured vertebrae, a split sternum, broken ribs and a punctured lung.

And during the referendum he and his family were chased out of a pub and their vehicle was attacked by masked protesters.

Elected as an MEP in 1999 he for years refused to kowtow to EU bullies who wanted to stifle his – and Britain’s – ambition.

But he had the last laugh and is now plotting to put English artisan gin on the global map.

He joked: “I have always lived on very little sleep – five hours maximum. Denis Thatcher was once asked, aged 70, what the secret to his energy was and he said, ‘gin and cigarettes’. Who am I to disagree with that?”

“I was a gin-drinking eurosceptic in the eighties back when people said, ‘Nigel, you’re so old fashioned’.”

“But there is a huge home drinking renaissance, which has increased during lockdown. Huge numbers are now going for home drinking, but with quality over quantity.”

“ I love a pint of real ale – you really can’t beat it – but at home I will drink gin and tonic, straight. And with this range you can really experiment. The colours are so fantastic and vibrant and cocktails are a joy to make.”

“A couple of years ago I happened to chance upon a retired couple who decided to have a go producing gin in their garage. I looked at the process they were using and it’s all hand made, hand bottled, hand labelled and hand packed. It’s a truly great cottage industry.”

“We’re about to have our fourth Prime Minister in six years and there is clearly much more to do. You might not yet have got the Brexit you voted for, but this stuff really is the taste of it.”