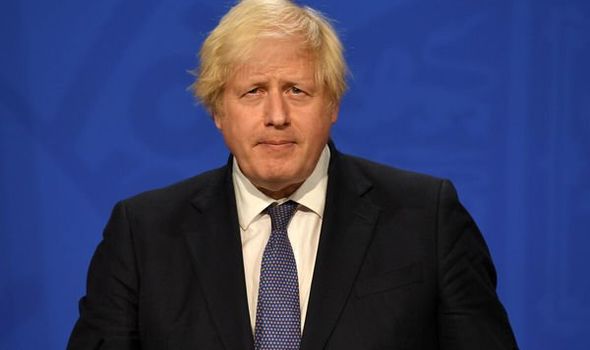 But Mr Johnson, who is one of 1.7 million currently self-isolating, said people had to accept that increasing numbers would be required to quarantine “as a consequence of living with” the virus.

Speaking from Chequers, he added: “I know how frustrating it is for all those who have been affected or pinged.”

He said people identified as contacts were “at least five times more likely to be infected than others”.

Consequence “Even if they have been vaccinated there is a significant risk that they can still pass the disease on.

“And so, as we go forward, I’m afraid that the continuing sacrifice of this large minority, those of us who have been asked to isolate, remains important to allow the rest of society to get back to something like normality.

“I’m afraid that at this stage it’s simply a consequence of living with Covid and opening up when cases are high in the way that we are.”

The system will move away from isolation for adults once they are all jabbed and for under-18s on August 16, he said.

“In the meantime I want to assure you that we will protect crucial services, including the staffing of our hospitals and our care homes, the supplies of food, water, electricity and medicines, the running of our trains, the protection of our borders and the defence of our realm, by making sure that a very small number of named, fully vaccinated, critical workers are able to leave their isolation solely for the work I have described.

“But for the vast majority of us, myself included, we do need to stick with this system for now.”

Mr Johnson has come under immense pressure to bring forward the August 16 deadline, with business leaders warning the rules are “crippling the economy in every sector”. There are fears that up to 10 million people could be forced to isolate in the coming weeks as Covid-19 infections surge.

The so-called “Pingdemic”, named after the ping that contacts get on their phone from the NHS Test and Trace app, is already creating staff shortages everywhere from the NHS to supermarkets.

Pub giant Greene King has been forced to shut 33 pubs in the past week while retail and leisure bosses have also faced closures after staff were told to isolate.

Nick Mackenzie, chief executive of Greene King, said he believes the rules should be reformed after he was forced to shut dozens of pubs or reduce their opening hours.

He told Radio 4’s Today programme: “This is a problem and I think it could get worse. It is disruptive to the business. We had to close, in the last seven days, 33 pubs due to lack of staff because of self-isolation.

“Across the industry, we think it is about one in five of our team members who have been affected by this and therefore it is causing a real issue for us setting up business on a daily basis – we’re having to have shortened hours in some circumstances.”

Meanwhile, Richard Walker, the managing director of the supermarket group Iceland, said around four percent of the total workforce were currently absent because of coronavirus.

He told the BBC: “We have got over 1,000 people absent due to Covid, that’s the highest ever since testing began.

“A number of stores have had to close and the concern is that as this thing rises exponentially, as we have just been hearing, it could get a lot worse, a lot quicker.”

Helen Dickinson, the chief executive of the British Retail Consortium, said the rising number of self-isolations was also having a “significant impact” on other shops.

“Community cases continue to rise fast in many areas of the UK, creating a challenge for many shops and distribution centres,” she said.

The Road Haulage Association also warned of impending chaos in supply chains. Schools that are still open before the summer break have reported that almost 840,000 children were not in class for Covid-related reasons.

Some parents are keeping children at home for the final days of term in a bid to reduce the chance of being told to isolate and potentially ruining summer holidays.

Geoff Barton, the general secretary of the Association of School and College Leaders, said the end of the summer term has become “extremely challenging” with large numbers of children self-isolating, escalating Covid rates and complex new guidance.

It was also reported that supplies of Covid-19 lateral flow tests appeared to run out yesterday just hours after most mandatory coronavirus restrictions were eased in England.

People attempting to order the athome kit via the Government’s website were told to “try again tomorrow when more tests become available”.