Footage uploaded on social media showed a gang of hooded youths surrounding a bus as one of the protesters throws a petrol bomb through the window. Police sirens are heard in the background as rioters continue to wreak havoc in Northern Ireland over unresolved border issues from Brexit. The bus was later seen on drone footage as completely engulfed in flames as emergency services cleared the streets.

Irish loyalists have been violently protesting in Northern Ireland as 41 officers have been injured.

Petrol bombs were thrown in Carrickfergus just north of Belfast and cars were set alight in Londonderry this week.

Around 11 people have been arrested at several demonstrations across the country with children as young as 12 seen taking part in the protests.

The protests are believed to be in response to issues surrounding the Northern Ireland Protocol and the government’s decisions to not prosecute attendees at a high-status Republican funeral. 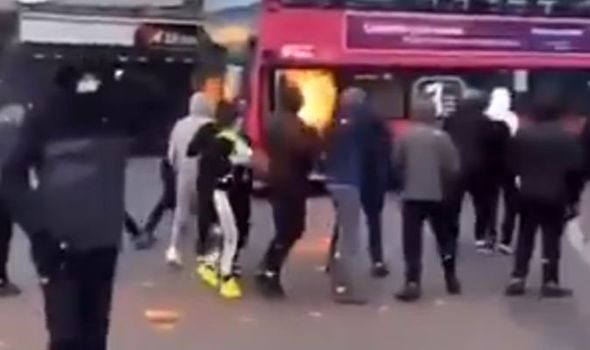 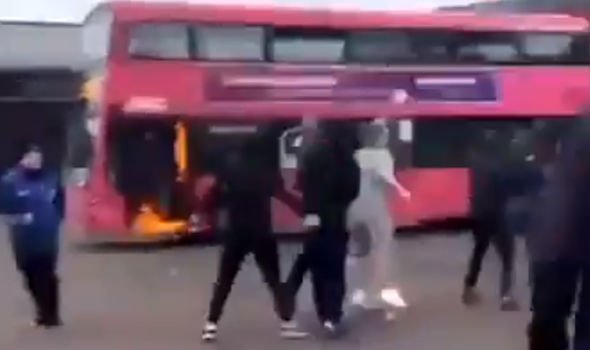 As part of the Protocol, Northern Ireland remains part of the EU Customs Union meaning goods entering from Great Britain are subject to additional checks.

This has meant some hauliers have been held up at ports as loyalists fear of an Irish Sea border being put in place.

Earlier this year, border staff were removed from ports in Belfast for their safety after alleged loyalist graffiti was seen near ports calling staff “targets”.