Home » Politics » Of Course, the Debate Was Always Going to Be About Trump

President Trump did for the Tuesday debate what he has done for the political life of the country in his four years: supply as much rampaging volume, custom-busting obtrusion and outright fiction as necessary to impose his will on the proceedings.

He declined to condemn white supremacy and let fly dark conspiracies about the voting process.

He mocked Joe Biden’s mask-wearing and intellectual firepower and seemed more interested in running against the caricature of his opponent than the man himself, once insisting that Mr. Biden supports defunding the police moments after the Democratic nominee made clear he did not.

And with inveterate interruption and well-practiced grievance, the president complained incessantly about the unfairness of it all, ensuring that the conversation — even on a subject as universally experienced as the coronavirus pandemic — turned back to his personal feelings and treatment at nearly every opportunity.

“Many of your Democrat governors said President Trump did a phenomenal job,” Mr. Trump offered in one exchange, sprinkling his typical first-person praise with a bit of third-person.

“‘President Trump did a phenomenal job,’” he repeated. “We did.”

He ticked through promises and boasts that strained credulity: about the velocity of vaccine availability, the lives he purportedly saved, the safety of his rallies, flashing more passion on the topic of Mr. Biden’s academic record than a virus that has killed more than 200,000 Americans on his watch.

Mr. Biden steered through an uneven rebuttal, recalling the president’s sunny projections of a largely virus-free Easter before settling on his thesis for the night.

“If you believe for a moment what he’s telling you in light of all the lies he’s told you about the whole issue relating to Covid,” Mr. Biden said, “he still hasn’t even acknowledged that he knew this was happening.”

On some level, this has long been the basic tension at the core of Mr. Trump’s quest to keep his job:

Which undecided Americans — to the extent that there are very many — can be swayed by a president whose personal behavior and threadbare credibility have already disappointed wide swaths of voters he needs?

Re-elections often reduce to this premise. The incumbent is dependable, or he isn’t. He has earned the deference to keep at it for four more years, or he hasn’t. 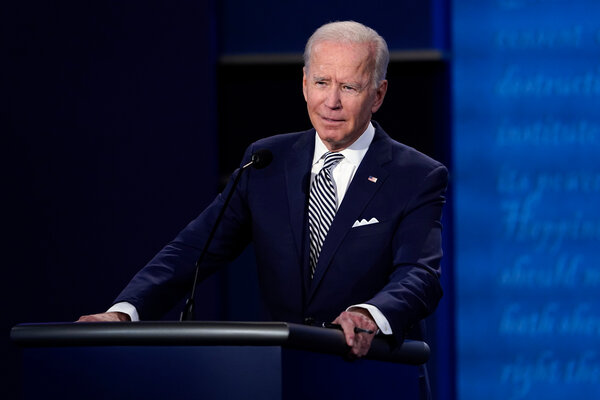 But for Mr. Trump, with approval ratings that hover in the low 40s and polls showing a solid lead for Mr. Biden in battleground states, the task is especially pronounced. After a first term spent confidently telling untruths and trafficking in conspiracy theory — including persistently playing down the dangers of the pandemic, in public and in private — he has reverted to a familiar pitch.

Believe me. I’ve got this. And would you get a load of the other side?

An insatiable self-evangelist and denier of realities that displease him, Mr. Trump invited viewers on Tuesday to embrace his preferred version of Trump-era events — a kind of executive happy place for the converted, where his reign has been spotless, the winning is bountiful and the virus has effectively been defeated.

The goal before Mr. Trump, though, was not merely to delight his base — though there was plenty of that — but to persuade the unpersuaded and to bludgeon his opponent, at minimum disillusioning some who might be inclined to see Mr. Biden as the lesser evil.

He moved to bind Mr. Biden to “socialist” forces on the left. He said China “ate your lunch, Joe.”

And he took furious aim at Mr. Biden’s own honesty, an issue on which the former vice president significantly outperforms Mr. Trump in voter surveys.

For four years, Mr. Trump has rarely strayed from the warm confines of his own informational bubble. Any exposure to the outside world — a White House news conference, a friendly media interview, a rally with adoring supporters — has generally gone forward on his terms.

But on Tuesday, this was a picture of a presidency stripped to its studs: an unpopular incumbent unfurling an often dubious defense.

Occasionally, the very sight of a presidential debate — the precooked zingers, the waving arms, the feigned incredulousness — could feel divorced from the gravity of the era and the policy contrasts that will color the course of American life for the next four years: sharp disagreements on health care access, environmental regulation, the future of the Supreme Court.

“That was a productive segment, wasn’t it?” Mr. Biden asked sarcastically at one point.

This was already an election of known quantities: two men in their 70s, bullheaded and proud, who have each managed public profiles for most of the last half-century and generally betrayed little interest in adapting their bearings much since.

The spectacle on Tuesday played to form.

Mr. Trump was as he is: relentless, immodest, never bashful about cutting in.

And Mr. Biden — the son of Scranton (and man of Washington) whom even supporters admire more for his intentions than his eloquence — was the candidate Democrats have come to know, for better or worse, across three presidential campaigns and a what-did-he-say-now vice presidency. His anecdotes drifted. His specifics were sometimes nonspecific. He could seem less stirring than performatively exasperated, as if debuting an Off Off Broadway show titled, “Come On, Man!”

“Will you shut up, man?” Mr. Biden said in one fit of crosstalk.

In a campaign already so far removed from the bounds of the regular — a pandemic, a generational protest movement, a sitting president accusing his opponent of mainlining performance-enhancing drugs — the mere sight of an engagement scheduled in the before-times was in some ways most disorienting of all.

Much of what Mr. Trump said in the first 45 minutes of the debate was something of a word cloud of Fox News opinion show segments. “Why don’t you say the words ‘law enforcement?!’” Mr. Trump demanded.

Prodded at one point to disavow white supremacists and militia groups, Mr. Trump said he was willing to before immediately pivoting to an attack on “antifa,” a recurring feature of his favored right-wing programming. “Proud Boys, stand back and standby,” Mr. Trump said of a far-right group notorious for engaging in violent clashes. “But I’ll tell you what,” he added. “Somebody has to do something about antifa and the left. Because this is not a right-wing problem. This is a left-wing problem.”

The president came armed with a list of nearly 20 things that Mr. Biden had said that were not true, like a statement about Delaware State. But while Mr. Trump was prepared by his advisers to go on offense against Mr. Biden to goad a collapse, the president was unable to modulate and simply tried to bulldoze.

Some flourishes seemed to evoke Mr. Trump’s calamitous coronavirus briefings with reporters in the spring, when he alarmed his own supporters by screaming at routine questions about the pandemic.

At the same time, this was the matchup that Democrats envisioned when they elevated Mr. Biden above some two-dozen primary competitors: the amiable sidekick to the nation’s first Black president, a capital veteran who has transcended personal hardships, facing down an opponent rarely cited for feats of empathy and often openly hostile to the nation’s institutions.

The latter portion of that contrast is a discussion Mr. Trump has welcomed. Presenting Mr. Biden as a political lifer with little to show for his efforts, the president set out on Tuesday to continue the difficult work of running as the race’s true outsider while simultaneously controlling the levers of government.

For months, Mr. Trump has been preparing his supporters for nothing short of abject humiliation for Mr. Biden on the debate stage, all but declaring (baselessly) that his opponent is beset by dementia and plying his followers with taunts of “Sleepy Joe” and often misleadingly edited social media clips of Mr. Biden’s verbal stumbles.

Of course, such overreach does not negate the trope that Mr. Biden is indeed an inconsistent debater at times. As he tends to a national polling lead generally in the mid to high single digits five weeks before Election Day, Democrats had suggested publicly that Mr. Biden merely needed to avoid catastrophe to consider the night a success. Surveys do indicate that most voters are already firm in their electoral intentions, leading strategists in both parties to question whether a single debate would make much difference.

Still, for liberals seeking a cathartic confrontation from their nominee after four years of Mr. Trump — and, more significantly, for the subset of voters disenchanted with this White House but hardly enthused about its alternative — Mr. Biden did enter the debate hoping to close the sale.

“So unpresidential,” he said of Mr. Trump’s conduct. But often, Mr. Biden struggled to negotiate the hail of interjections — and self-inflicted asides of his own that broke up any narrative momentum.

Before the debate, Mr. Trump made clear to advisers that he would like to speak frequently about Mr. Biden’s younger son, Hunter, despite being warned that would give the former vice president an opening to discuss the president’s daughter and son-in-law working in the White House and declining to divest themselves of holdings.

In the end, Mr. Trump took the risk, ridiculing Hunter Biden’s business dealings and history with drug addiction. (An investigation into the Bidens released last week by Senate Republicans found no evidence of wrongdoing or improper influence by the Democratic nominee, though it accused the younger Mr. Biden of having “cashed in” on his father’s name in overseas business ventures.)

The biggest problem, some aides to Mr. Trump acknowledged privately, was that his faring well depended in part on his ability to make Mr. Biden lose his temper. On the broader question that has dominated the election this year — Mr. Trump’s and his administration’s failed pandemic response — there is no particularly good answer that the president can offer, some Republicans concede. So he has generally chosen not to answer it and change the subject, as he did when he could on Tuesday.

This has always been a rhetorical strength. Four years ago, Mr. Trump was not a polished debater but to the extent he succeeded, it was because he proved willing to go where no other modern presidential candidate would.

And near the conclusion on Tuesday, he shared with voters the kind of ominous and meritless forecast that tends to overshadow any fleeting snapshots of discipline.

Pointing to the Democratic-leaning city of Philadelphia as the kind of hellscape he thinks could cost him the election, Mr. Trump refused to promise to wait until all ballots are counted before declaring victory.

The first presidential debate between President Trump and Joe Biden devolved into a brawl, as Mr. Trump urgently tried to shake up the race. Here are six takeaways.