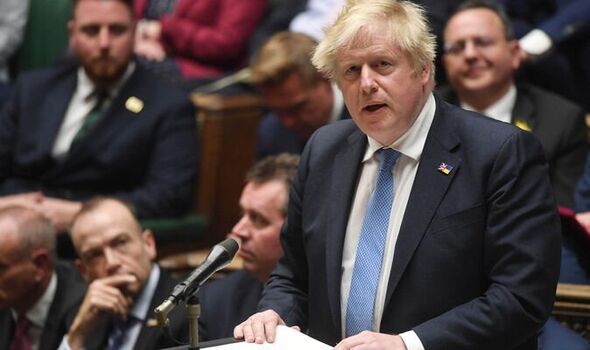 The Prime Minister’s humble apology was rejected by the Labour leader who refused to address the real issues facing Britain. Mr Johnson said sorry with “full humility” and insisted he now has “an even greater sense of obligation” to stand up to Vladimir Putin’s aggression in Ukraine and tackle the cost of living crisis. Ukraine and to tackle the cost of living crisis. Mr Johnson again apologised repeatedly for breaching lockdown rules but his contrite statement to MPs was met by Sir Keir’s calls for him to resign. Tories were enraged by the Labour leader’s attack, with one accusing him of “whipping up hysteria”.

Jason McCartney told last night’s meeting of the Tory backbench 1922 Committee he had been abused in his Colne Valley constituency. He feared that aggressive language in the Commons risked stoking “visceral hatred” and raised the issue of the murders of MPs Jo Cox and Sir David Amess.

He told the gathering: “Starmer was whipping up hysteria. Let’s remind everyone that two MPs have been killed. There is a potential here for visceral hatred. We saw a lot of it on the opposition benches today.”

Signalling his sympathy with the MP, Mr Johnson said: “There is a coarsening of the debate that does our politics no favour.”

Jacob Rees-Mogg led Cabinet support for the Prime Minister, saying that voters were “exceptionally well served by Boris Johnson. Under immense pressure, the Prime Minister is ensuring that the British Government is looking out for the British people,” the minister for Brexit Opportunities wrote in today’s Daily Express.

Mr Johnson yesterday acknowledged the “hurt and anger” felt by many members of the public about lockdown law-breaking parties in Downing Street.

But he insisted the furore over his £50 fixed penalty fine for joining a drinks gathering in No 10’s Cabinet Room to celebrate his birthday on June 19 2020 had left him even more determined to get on with the job.

The PM still faces an uncomfortable Commons vote tomorrow over claims that he misled MPs by denying the parties took place.

Last night he was rocked by former Tory whip Mark Harper demanding a confidence vote in his leadership.

Mr Johnson faced the Commons on the first day after the Easter recess to make a statement about police fines imposed on him and Chancellor Rishi Sunak during the break. He said he paid his fine immediately and “offered the British people a full apology.

“I take this opportunity, on the first available sitting day, to repeat my wholehearted apology to the House,” he told MPs, with Mr Sunak sitting by him.

“I said that people had a right to expect better of their Prime Minister, and I repeat that. Let me also say – not by way of mitigation or excuse but purely because it explains my previous words in this House – that it did not occur to me, then or subsequently, that a gathering in the Cabinet Room just before a vital meeting on Covid strategy could amount to a breach of the rules.

“That was my mistake and I apologise for it unreservedly. I respect the outcome of the police investigation, which is still under way, and I can only say that I will respect their decision making.

“It is precisely because I know that so many people are angry and disappointed, that I feel an even greater sense of obligation to deliver on the priorities of the British people, and to respond in the best traditions of our country to Putin’s barbaric onslaught.”

Rubbishing the apology as “a joke”, Sir Keir said: “The public have made up their mind. They don’t believe a word the Prime Minister says. They know what he is. He doesn’t respect the sacrifice of the British public. He is a man without shame.”

The Labour leader labelled the Cabinet “nodding dogs” while urging “decent, honourable” Tory MPs to oust the Prime Minister: “Bring decency, honesty and integrity back into our politics and stop the denigration of everything that this country stands for.”

Mr Harper also called on the PM to quit: “I regret to say that we have a Prime Minister who broke the laws that he told the country they had to follow, hasn’t been straightforward about it and is now going to ask the decent men and women on these benches to defend what I think is indefensible.

“I’m very sorry to have to say this, but I no longer think he is worthy of the great office that he holds.”

“It is especially at times of international crisis and tensions that our country needs a Prime Minister who commands trust, obeys the law and exemplifies the very values that we are trying to defend.”

But Tory ex-minister Steve Baker said Mr Johnson “could not have made a more humble apology” while colleague Julian Lewis urged the PM to trigger the release of the full report by civil servant Sue Gray into lockdown breaches “so that we do not get diverted…from such crucial questions as supplying armaments to Ukrainian democrats”.

The Prime Minister took a swipe at the Archbishop of Canterbury last night while rallying Tory MPs to get behind the Government and move on from Partygate.

He claimed that some senior clergy had “misconstrued” the Government’s plans to send some asylum seekers to Rwanda, adding: “They were rather less vociferous in their condemnation of Vladimir Putin in their sermons.”

His remarks to the 1922 meeting came after Archbishop Dr Justin Welby said the policy “cannot stand the judgement of God”.

Yesterday the Prime Minister delivered a sincere and humble statement to Parliament.

Reflecting on events from nearly two years ago, he was clear that his original statements to the House were always consistent and honest.

Like a batsman who reviews the umpire’s decision to give him out by LBW, he acted in good faith and his statements to Parliament so far reflect that.

He was certain that the brief recognition of his birthday in the Cabinet room was as legal and above board as any of the multiple meetings he attended that day.

As a batsman at the wicket, he believed the ball was comfortably missing the stumps. Yet the umpire, also acting in good faith, thought otherwise.

His review of the decision, however, was found incorrect by the Metropolitan Police.

He accepted the result with good grace and apologised. He is continuing with the job that the electorate has given him, for the benefit of the whole nation.

Following his recovery from a near-lethal bout of Covid, the Prime Minister has been one of the most capable leaders we could have asked for.

This year presents significant challenges to the British people and indeed the world.

Supply-chain shocks are increasing the cost of living across every continent. The war in Ukraine has sent energy bills spiralling the world over and is creating a humanitarian disaster not seen in Europe for many decades.

The readers of the Express deserve the best possible leadership from the Prime Minister and I believe they are exceptionally well served by Boris Johnson.

Under immense pressure, the Prime Minister is ensuring that the British Government is looking out for the British people.

The new energy strategy will mean we can harness our ample domestic resources so people can heat their homes affordably.

The Prime Minister and the Home Secretary are finally bringing sense to our asylum system by breaking the people smugglers’ business models, deterring criminality and offering sanctuary to those in need.

Boris continues to demonstrate serious leadership and foresight both on the domestic and world stage.

There is nobody else who can offer the vision, dedication and charisma to lead Britain today. The Prime Minister has my resolute support and I am certain that the Express readers share in my confidence.

Whose soiree now? The rollcall of gatherings

MAY 15, 2020: Boris Johnson and his staff gathered in the Number 10 guardian with cheese and wine served.

JUNE 18, 2020: A gathering was held in the Cabinet Office to say farewell to a departing private secretary.

JUNE 19, 2020: Up to 30 people gathered in the Cabinet Room to mark the Prime Minister’s birthday. Officials said he attended the event for “less than 10 minutes.” Mr Johnson, his wife Carrie and Chancellor Rishi Sunak have been fined over the event.

DECEMBER 10, 2020: The Department of Education held a staff gathering.

DECEMBER 15, 2020: A Christmas quiz for Number 10 staff was held. A photograph showed the Prime minister sitting between two colleagues to host the online quiz.

DECEMBER 16, 2020: The Department for Transport has apologised for a party held in its offices. Other gatherings were held in the Cabinet Office and Number 10 Downing Street that day.

DECEMBER 18, 2020: A wine and cheese gathering was held in Downing Street that the Prime Minister’s press secretary Allegra Stratton joking about later.

JANUARY 14, 2021: A gathering was held in Downing Street to say farewell to two departing private secretaries.

Pierre Trudeau, the Canadian Prime Minister for most of the 1970s, once said that “the essential ingredient in politics is timing”.

The wisdom of those words is encapsulated in the remarkable survival of Boris Johnson, despite his fine for breaching lockdown rules during the pandemic.

If his conviction had occurred in February, he would have struggled to stay in office.

But the temperature has fallen since then. That change in mood is partly down to the passage of time, but a much bigger reason is the war in Ukraine, which has put Partygate into perspective and enabled Johnson to build up his credentials as a global statesman.

Tellingly, he was almost 40 minutes late in making his address yesterday because, as he explained, he had been on a vital conference call about Ukraine with US President Biden and other global leaders.

But to his enemies, Johnson is using the war to distract attention from the lockdown scandal. That was the argument made by Sir Keir Starmer yesterday, when he reduced the Tory benches to silence with his assault on the Prime Minister’s character, accusing him of “deflections and distortions” over Partygate.

Sir Keir’s show of moral indignation was exacerbated by the perfunctory nature of the Prime Minister’s apology.

There had been advance briefings that this would be “fulsome” but it was nothing of the sort.

Even some of his MPs were frustrated with his performance, as highlighted by the former Chief Whip Mark Harper, who complained that the Prime Minister was “no longer worthy of the great office that he holds”.

Even so it seems unlikely that Johnson will be ousted. Apart from impact of Ukraine and the economy, there are a number of other factors that make Tory MPs reluctant to hold a leadership contest.

One is the lack of an obvious replacement, now that Rishi Sunak’s reputation has been dented and Liz Truss’s star has been eclipsed by Johnson’s own domination of foreign policy.

Another is the successful revamp of the Number 10 machine under the new chief of staff Steve Barclay.

A third is the imminence of the local elections in May, which has given MPs an excuse not to strike. “No one wants to rock the boat now. It will only punish our friends and colleagues in the constituencies who are running to be local councillors,” says one.

Nor is Labour’s threat to introduce a motion of censure tomorrow much of a threat, since Boris is protected by his huge 80-seat majority.