Home » Politics » Purple was a popular color at the inauguration and masks were the must-have accessory.

Forget red and blue (states). The theme of the Biden inauguration was “America United,” and the color of the day seemed to be purple — the shade that bridges the divide by bringing both colors together (not to mention one of the original signature colors of the suffragists, whose dreams are now being realized with the first woman vice president).

“Purple is the color of loyalty, constancy to purpose, unswerving steadfastness to a cause,” the National Woman’s Party wrote in a newsletter in 1913. 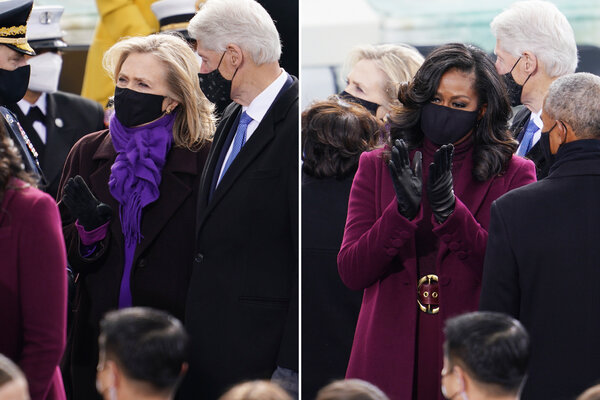 Masks were also part of the material culture of this inauguration. Dr. Biden wore a sky blue mask that appeared custom-made to match her coat, and other members of her family chose a similar monochromatic theme. Ms. Harris opted for a shiny black number that complimented her purple outfit, one of her signature mask looks.

Many men opted for paper medical masks, but a few went for solid shades or face coverings that featured insignia. Former President George W. Bush sported a mask made by Rhoback, a company that was started by former Capitol Hill staffers.