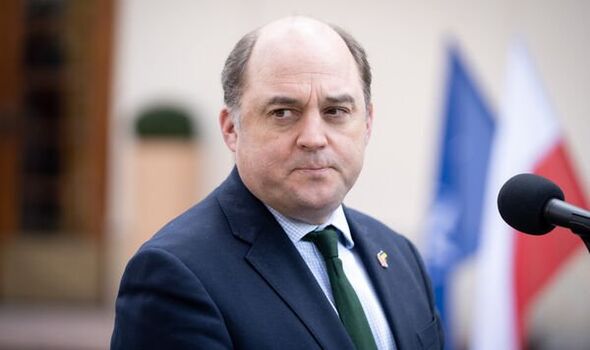 The Defence Secretary said the Russian leader, his inner circle and generals are “mirroring the fascism and tyranny” of the Nazis 77 years ago.

But he warned Putin still had one option “in his back pocket” to win the war in Ukraine – “brutality”.

Mr Wallace signalled Britain will continue arming Ukraine to help it push Russia out of its territory altogether if President Zelensky asks.

Prime Minister Boris Johnson, speaking on Victory Day – a holiday in many former Soviet countries celebrating victory over Nazi Germany – said: “I have never been more certain that Ukraine will win, Ukraine will be free and a sovereign Ukraine will rise again”.

He added: “Britain will be with you for as long as it takes.”

Senior US defence officials said Russia is failing to seize territory in Donbas because Russian troops will not advance ahead of artillery assaults, Russian armour is stuck on paved roads because of Spring mud, logistical issues and troops not following orders.

The Defence Secretary declared: “It is very possible that Ukraine will break the Russian army to the extent that they either have to go back to pre-February or they have to effectively fold in on itself.”

“Putin must fail in Ukraine is obviously our key policy mission, but you know we mustn’t avoid the fundamentals here, which is it is for Ukraine to choose how it ends this conflict, or how it makes Russia end this conflict, and in what manner.”

“It would be totally wrong of me to start telling Ukraine the conditions it should or shouldn’t accept. For what it’s worth, whatever they choose, we will stand by them in helping deliver that.”

He said Moscow’s “battle-winning components” of technology, leadership and intelligence had all failed.

He claimed that Russian pilots had been forced to tape GPS receivers to their dashboards because their own systems do not work, and said: “Vehicles are frequently found with 1980s paper maps of Ukraine in them.”

Russian troops are so undersupplied that they have to use logs to try and defend their logistics vehicles.

They have also not been given the medical equipment and they need and are followed around by mobile crematoriums to hide the true scale of their losses in Ukraine.

And the Defence Secretary said the Russian military insults the memory of the Soviet troops who fought against Adolf Hitler’s forces in World War Two.

The Ukrainian ambassador to the UK, Vadym Prystaiko, said the best way out of the war is if “Ukraine wins militarily”.

He added: “If you allow yourself … the idea that actually Russia can be defeated on the fields of war, you will allow yourself to think and find a way what to do, maybe it would be even better for Russians themselves.”

President Putin attempted to justify his assault on Ukraine, saying the invasion was necessary because the West was “preparing for the invasion of our land, including Crimea”.

He also repeated false claims Kyiv was trying to procure nuclear weapons and said Russian forces have been “fighting for the Motherland, so that no one will forget the lessons of World War Two”.

He again repeated claims he ordered the “special military operation” to “de-Nazify” Ukraine.

But Mr Wallace, in a speech at the National Army Museum, said: “Through their invasion of Ukraine, Putin, his inner circle and generals are now mirroring the fascism and tyranny of 77 years ago, repeating the errors of last century’s totalitarian regimes.

“They are showing the same disregard for human life, national sovereignty, and the rules-based international system.

“The response to this failure by Russian Forces on the ground in Ukraine has itself been a disgraceful display of self-preservation, doubling down on failure, anger, dishonesty and scapegoating.”

During a Victory Day memorial in Poland, the Russian ambassador was covered in red paint and branded a “fascist” as furious crowds surrounded him.

He said: “Let’s call out the absurdity of Russian generals – resplendent in their manicured parade uniforms, weighed down by their gold braid and glistening medals.”

“They are utterly complicit in Putin’s hijacking of their forebears’ proud history; of defending against a ruthless invasion; of repelling fascism; of sacrificing themselves for a higher purpose.”

“And now, they are the ones inflicting needless suffering in the service of lowly gangsterism.”

“And for them and for Putin there can be no ‘Victory Day’, only dishonour and surely defeat in Ukraine.”

Mr Wallace also declared Vladimir Putin has been spouting “a number of fairytale claims for months and years now” about false claims the West wants to invade Russia.

He said: “If it wasn’t so tragic it would be amusing, but it isn’t.”

“One of his claims is that he is surrounded. Nato accounts for 6 per cent of his land border.”

That’s not being surrounded if only 6 per cent of your land border is Nato countries.

“I think he is believing what he wants to believe – a slight shine of desperation. But let me put on the record categorically: Nato, Britain, eastern Europe is not planning to invade Russia and never has done.”

Belarusian President Alexander Lukashenko, a key ally of Moscow, has accused the West of supporting Nazi ideas and of being “at war with Russia” in Ukraine.

“Followers of the Nazis are obsessed with the idea of revenge, but they are not ready to fight openly against the heirs of the Soviet people,” Mr Lukashenko said at a speech on Victory Day, an annual holiday in Russia and other ex-Soviet countries to mark the defeat of Nazi Germany in 1945.”

“That’s why they are flooding Ukraine with weapons, waging war on memorials, symbols and veterans,” he said.”

But Boris Johnson accused the Russian leader of waging an “unwinnable” war “solely for his own vanity”.

Russian forces used tanks and artillery in “storming operations” at the Azovstal steel plant in Mariupol where the city’s last defenders are holed up, Ukraine’s defence ministry said.

But Mr Johnson said: “Russians are right to commemorate their heroic role in the defeat of Nazism. But Putin’s brutal attack on Ukraine shames Russia. His unwinnable war is being fought solely for his own vanity.”

“He is now expending senselessly the lives of young Russians as well as innocent Ukrainians to avoid humiliation. I have always said Putin must fail and Putin will fail because this is an ego-driven mistake.”

The Defence Secretary also said Russian suffering was used under the Soviets “as it is now, to cover up the inadequacy of those ruling in safety and comfort from behind the Kremlin walls”.

“Fear and sycophancy dictated behaviours then, and today’s Russian armed forces still carry that Soviet imprint – the imprint of amorality and corruption.”

“How could these Generals commit their own troops knowing they were without the necessary medical support to care for them when injured in the pursuit of the orders they themselves issued?”

“It is just another example of the moral decay in the Russian Forces. Rotten downwards, from the Chief of the General Staff down, where ultimately the blame must lie.”

“Conscripts taken into a conflict zone unknowingly and illegally against Russian law, despite recent government claims to their families that no such thing would be done.”

“Even when Ukrainian citizens have tried to indicate that buildings are sheltering civilians with signs marked out with ‘medical’ or ‘children’ the Russians have largely ignored them and then created false stories to try and cover the bombing.”

“Women and children raped and then murdered. A “terrifying echo of the Red Army’s mass rapes committed in 1945” according to historian Sir Antony Beevor.”

“But such open and shameless corruption does mean a complete record of who those soldiers are.”

“We know who they are, where they have been and what crimes they have committed. It’s being created and filed and can be used to bring them and their commanders to justice as well.”