European Commission vice-president Maros Sefcovic said the bloc is ready to take “retaliatory measures” after talks over the post-Brexit plans to avoid a hard border ended without a breakthrough.

The Brussels diplomat insisted EU chiefs would not be “shy in reacting swiftly, firmly and resolutely” to ensure the Prime Minister sticks to the terms of his Brexit divorce deal.

Speaking to reporters in London, Mr Sefcovic added: “Our patience really is wearing very very thin therefore we have to assess all options we have at our disposal. Legal action, arbitration, and of course I’m talking about cross-retaliation. We do not want this to happen.

“If it comes to the cross-retaliation… If you look through the agreement it’s pretty obvious it could be the suspension of the cooperation in certain sectors, it could mean if you continue to have persistent problems of implementation of the deals we have signed also the quota tariffs could come into the place but all these measures have been put into the TCA because we just wanted to be sure if something goes wrong, if we don’t live up to the agreement which we have signed then there are also cross-retaliatory measures, which we all hoped and thought we would never ever even consider so now I’m very sorry we are at this situation.”

This could first happen on June 30 if No10 refuses to introduce checks on chilled meats, such as burgers and sausages, being shipped from Great Britain to Northern Ireland.

There is currently a grace period on the Brussels blockade of sausages in place until the end of the month. 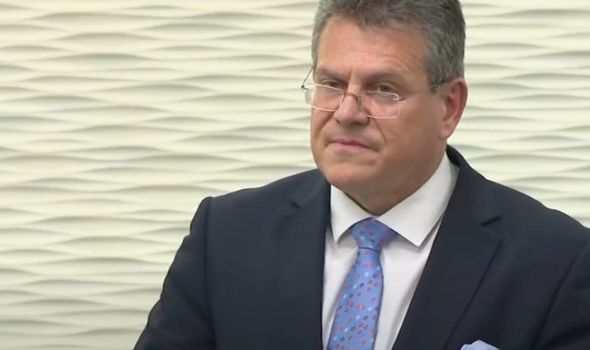 Mr Sefcovic insisted he wants to reach a negotiated outcome with his UK counterpart Lord Frost.

The Brexit minister and EU Commission chief today held talks in London over the implementation of the Northern Ireland Protocol.

Both sides conceded that there was not a breakthrough in their wrangling over the post-Brexit border fix.

The EU believes an agreement over the implementation of the trade rules can still be found before a trade war is triggered.

Mr Sefcovic continued to push his plans for Britain to follow Brussels’ animal and food safety rules in order to eliminate 80 percent of the trade checks on Northern Ireland.

The eurocrat suggested the compromise could even be introduced on a temporary basis to prevent the UK being hindered during its global trade negotiations.

But this plan has been ruled out by Lord Frost, who insists he won’t allow Britain to be locked to EU rules made in Brussels.

Speaking after the meeting, the Brexit minister said: “The problem we’ve got is the Protocol is being implemented in a way which is causing disruption in Northern Ireland, and we had some pretty frank and honest discussions about that situation today.

“What we really now need to do is very urgently find some solutions which support the Belfast Good Friday Agreement, support the peace process in Northern Ireland, and allow things to return to normal.

“What the EU is insisting on is we should operate the Protocol in an extremely purist way.

“The reality is that it’s a very balanced document that’s designed to support the peace process and deal with the very sensitive politics in Northern Ireland.

“If we can find pragmatic solutions that work with that then we will be very happy to work with them.”

It raises the prospect of a full-blown trade war with Downing Street now even closer to unilaterally scrapping swathes EU red tape for Northern Ireland.

He told reporters there are a “range of options” under consideration by No 10, adding: “It’s obviously best to find a negotiated agreement if we can and that’s what we are really intending to do.

“If we can’t, and we’re working very hard to do it, then obviously we consider all our options for next steps.”