The former chancellor has promised to revitalise Britain’s 58,000 empty shops and to stop banks from closing branches and removing cash machines from local communities. Mr Sunak said that rejuvenating the high streets was “a crucial part” of his plan to rebuild the economy.

His pledge comes as his battle with rival candidate Liz Truss enters a crucial period.

Ballot papers start going out to party members tomorrow and they have until September 2 to cast their vote.

But many are expected to do so early which means the next two weeks could be decisive in the battle to replace Boris Johnson as Prime Minister.

Both Mr Sunak and Ms Truss have faced calls from the country’s biggest retailers to cut business rates. The Retail Jobs Alliance – which includes Tesco, Greggs and Sainsbury’s – last week accused the candidates of failing to prioritise the high street as firms are being hammered by the so-called shops tax amid spiralling inflation. 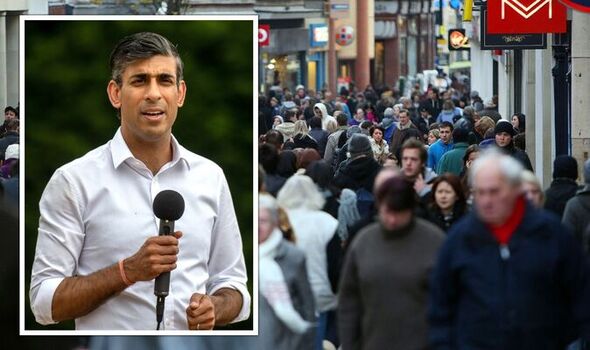 As Chancellor, Mr Sunak provided business rates relief during the pandemic and oversaw a review into the property tax, but no radical reform followed.

Ms Truss has signalled she would overhaul business rates if she becomes prime minister.

But Mr Sunak, currently seen as the underdog in the Tory leadership contest, said: “I understand the vital role high streets play in communities.

He has pledged to put empty shops to use by consulting with local authorities on measures which would make it easier to convert boarded-up properties into businesses such as cafes.

Mr Sunak said: “I want to slash the number of empty shops by 2025 and make sure they are turned into thriving local assets, supporting skills, businesses, economies and creating jobs.

“They will be joined by vital public services – like police stations and job centres. I’ll also support covered markets and farmers markets, making it as easy as possible for them to trade on our high streets and sell their fantastic produce.”

And Mr Sunak said he wanted to see a doubling of on-the-spot fines for those who seek to make life a misery for others on Britain’s streets.

“We should all take pride in our high streets so I will also crack down on anti-social behaviour, graffiti and littering – through extended police powers and increased fines,” the former chancellor said.

“I have been clear that I have a plan to rebuild our economy; our high streets are a crucial part of that.”

And Mr Sunak wants to ensure it will remain possible to obtain cash from a bank or ATM by giving the financial services regulator more powers to stop them being taken away.

Many shoppers now pay using debit or credit cards but 17 per cent of all purchases are still made using cash.

Mr Sunak also hit out at “woke nonsense” in a speech to supporters in West Sussex yesterday, saying he would prevent “left-wing agitators” from taking “a bulldozer to our history, our traditions and our fundamental values”.

He vowed to review the 2010 Equality Act, which he called a “Trojan horse that has allowed every kind of woke nonsense to permeate public life”.

Today, the candidates will take part in a hustings event in Exeter. This will be followed by another in Cardiff on Wednesday and one in Eastbourne on Friday.

On Thursday, they will meet in a live head-to-head debate broadcast by Sky News.