Mr Sunak was the second among a now-cascade of Conservative politicians to resign this week following a string of government scandals under the leadership of Prime Minister Boris Johnson.

After quitting on Tuesday evening, saying he could no longer remain loyal to the Prime Minister, he stayed away from the public eye.

But his wife, daughter to a billionaire, walked out of their London house to show the media some hospitality.

The 42-year-old carried out a tray of tea and biscuits which she placed on a small table before disappearing back inside. 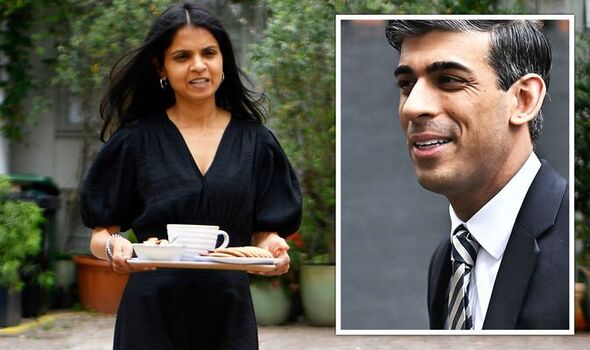 Ms Murty, an Indian citizen, was the subject of a tax row earlier this year that cost her husband part of the public’s confidence in his family’s honesty.

She opted to claim non-dom status, meaning she does not have to pay UK tax on her overseas income.

The non-dom scheme is legal. Yet, when the arrangement came to light in April, Labour said it would be “breathtaking hypocrisy” if the then-Chancellor’s wife had reduced her tax bill as he raised them for millions of workers.

Ms Murty owns a 0.9 percent stake in Infosys, the software giant founded by her father.

Over the past seven-and-a-half years, the period for which there is public data, she has collected about 5.4billion Indian rupees (£54.5million) in dividends from the Indian-headquartered IT business.

Non-dom status for that whole period could have saved her about £20m in UK taxes. 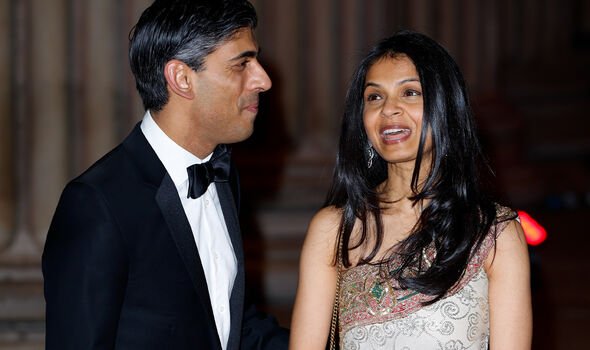 Her husband’s reputation was damaged by the controversy as well as by the fine he received not long after for breaching lockdown rules.

Still, he is now one of those tipped as a potential future head of the Conservative Party after it was announced this morning that Mr Johnson would today resign as Tory leader.

Mr Sunak only became an MP in 2015 and was Chancellor of the Exchequer by February 2020.

As he continues in his post for the North Yorkshire constituency of Richmond, it is thought he might use his early (in comparison to others) decision to quitting the cabinet to make a case for the integrity and leadership he would bring to No10 if he was elected for Britain’s top job.

His move — and that of dozens of his colleagues — came over the Prime Minister’s mishandling of allegations surrounding former Deputy Chief Whip Chris Pincher, who has been accused of groping two men while intoxicated at a London nightclub.

He said he recognised “this may be my last ministerial job, but I believe these standards are worth fighting for and that is why I am resigning”.

However, the departure of Mr Johnson from No10 less than three years after first entering Downing St may well bring new opportunities for the former Chancellor.