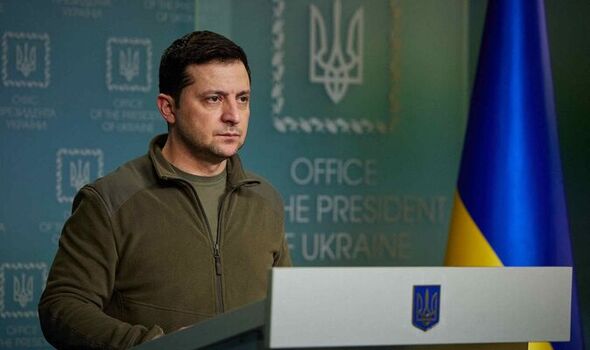 The EU is poised to freeze European assets of President Vladimir Putin and his foreign minister, Sergey Lavrov, but there are no curbs on gas and oil imports. The asset ban on Putin and his right-hand man does not include travel restrictions, in the hope of allowing diplomatic routes to remain open.

Ukraine’s leader Volodymyr Zelensky accused Western allies of playing politics and told Europe: “You still can stop this aggression.You have to act swiftly.”

President Zelensky hit out as Boris Johnson spoke in a video conference to heads of partner nations in the UK-led Joint Expeditionary Force.

They were discussing how far the alliance can go to challenge Putin, without engaging Russian forces in direct war.

The Prime Minister also addressed a message directly to the people of Russia, saying in Russian: “I do not believe this war is in your name.” In a video posted on social media, Mr Johnson spoke Ukrainian after urging an end to the conflict “because the world needs a free and sovereign Ukraine”.

He said: “The scenes unfolding in the streets and fields of Ukraine are nothing short of a tragedy. It’s a generation or more since we witnessed such bloodshed in Europe. We hoped we would never have to see such sights again.”

But Mr Zelensky said banning Russians from entering the EU, cutting Moscow off from the Swift global bank payments system and an oil embargo should all be on the table. Germany and Italy opposed the Swift ban calls, fearing it would cause problems paying for energy supplies.

Italy’s prime minister, Mario Draghi, sparked scorn during the EU sanctions talks by pushing to protect sales of Italian luxury goods. An EU source said: “Apparently selling Gucci loafers to oligarchs is more of a priority than hitting back at Putin.”

And Mr Draghi infuriated Mr Zelensky by saying the Ukrainian leader was supposed to have taken part in a phone call yesterday.

Mr Zelensky tweeted: “Today at 10.30am at the entrances to Chuhuiv, Hostomel and Melitopol there were heavy fighting. People died. Next time I’ll try to move the war schedule to talk to Mario Draghi. Meanwhile, Ukraine continues to fight for its people. ” The European Union will also target the financial, energy and technological sectors in a bid to stop Putin redrawing Europe “by force”.

They include financial curbs targeting 70 per cent of the Russian banking market and key stateowned companies. An export ban on the oil sector will make it “impossible” for Moscow to upgrade refineries and sales of aircraft and equipment are banned.

Ms von der Leyen said: “Putin is trying to subjugate a friendly European country. He is trying to redraw the map of Europe by force. He must, and he will, fail.”

Transport Secretary Grant Shapps also extended a flight ban, meaning no Russian private jet can fly or land in British airspace. Meanwhile, President Joe Biden is sending more forces to bolster US strength in Europe and support Nato allies. Following a phone call to Mr Zelensky yesterday, he said: “As President Putin threatens the very foundations of international peace and security, Nato is once again demonstrating that it stands for freedom and democracy.”