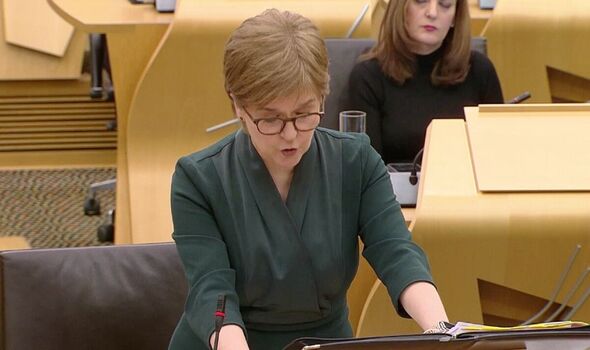 The Scottish Parliament has been suspended after an anti-Sturgeon protest caused chaos at Holyrood.

MPs had returned to the chamber today for the first time since the festive break.

Presiding officer Alison Johnstone announced there would be a “brief suspension” after protesters disrupted the session.

Shouting could be heard from the public gallery, with protesters directing concerns at the First Minister.

This is the second protest to hit Ms Sturgeon in a matter of days.

Yesterday, teachers demonstrated outside the First Minister’s official residence demanding higher wage, as thousands walked out of classrooms across Scotland.

Andrene Bamford, the president of the Scottish teachers’ union, told the crowd the rate of inflation was “still crazy”, adding: “If we don’t get a decent pay settlement our wages will be further eroded.”

She said: “If the Scottish Government say they have no money, well, they need to take their budget back to the drawing board and they need to think again.”

The union boss added: “Here is a message for the Government – don’t resort to Tory tactics of using language that others the unions.”

The Scottish Government dismissed the 10 percent rise demanded by EIS members as “unaffordable”.

Instead, it made an offer which would see most teachers get a 5 percent rise with the lowest paid getting 6.85 percent.

We’ll be bringing you the very latest updates, pictures and video on this breaking news story.

For the latest news and breaking news visit: /news

Stay up to date with all the big headlines, pictures, analysis, opinion and video on the stories that matter to you.

Follow our social media accounts here on facebook.com/DailyExpress and @Daily_Express