WASHINGTON (Reuters) – The U.S. Senate later this week aims to vote on a drastically scaled-back Republican coronavirus aid bill, Majority Leader Mitch McConnell said on Tuesday, despite opposition from Democrats who are needed for any measure to be enacted into law. 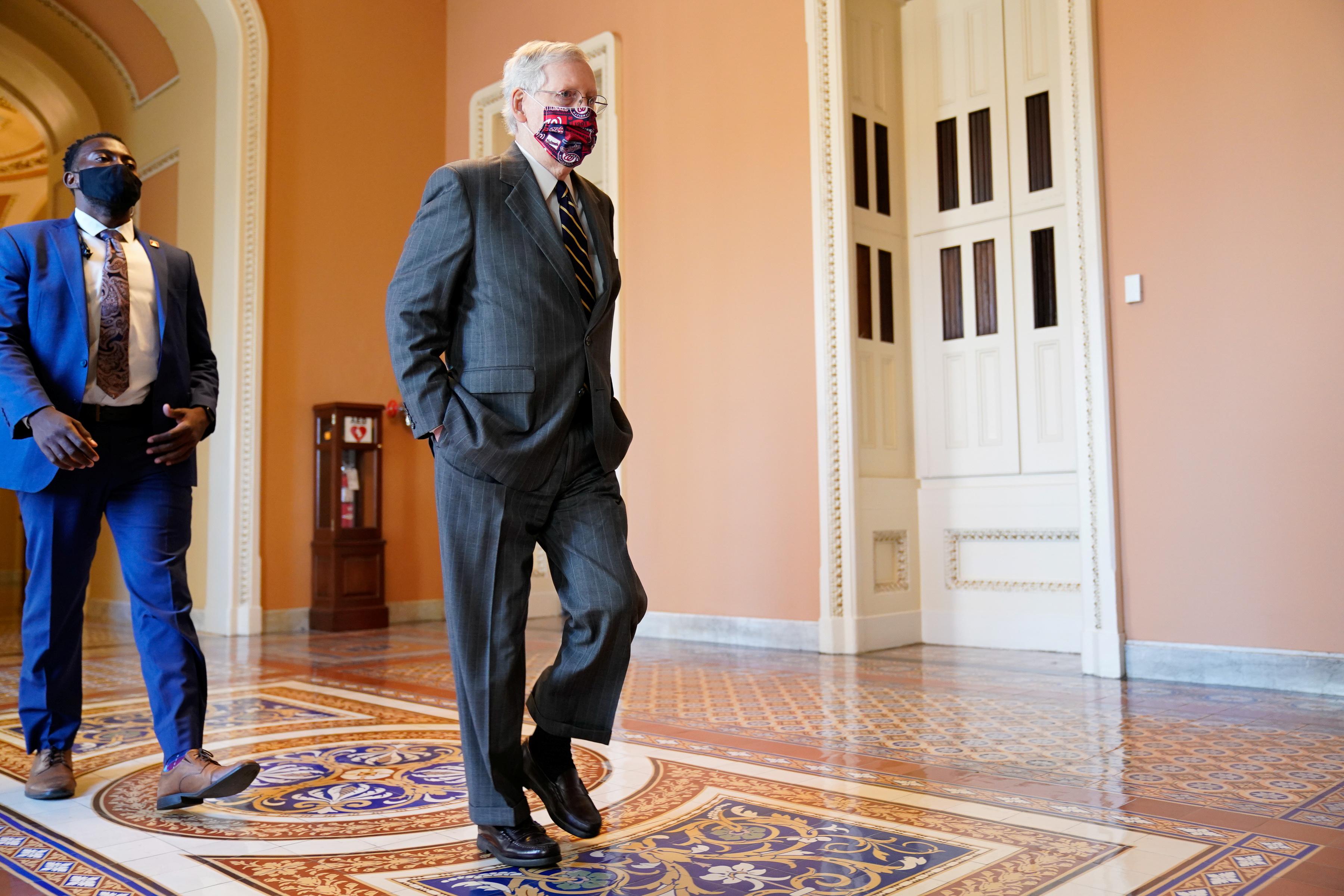 The bill, which some senior Republican aides described as a $300 billion package that was reduced from the $1 trillion McConnell advocated in July, would face a vote on Thursday.

Barring a breakthrough, it could be the final attempt to pass a fifth coronavirus aid bill before the Nov. 3 presidential and congressional elections.

With Democrats holding out for a far more comprehensive bill to further stimulate the economy and help battle the coronavirus, McConnell said in a Senate floor speech: “We want to agree, where bipartisanship is possible … and then keep arguing over the rest later.”

But House of Representatives Speaker Nancy Pelosi has argued that a subsequent bill would be too far off to avert layoffs of police, fire and medical personnel unless emergency aid is rushed to state and local governments.

Several attempts over the past several weeks to work out a deal between congressional Democrats and the Republican White House have so far failed, leaving the two parties more than $2 trillion apart.

The Democratic-controlled House in mid-May called for a $3 trillion bill.

Democrats called McConnell’s latest plan “emaciated,” dismissing it as a political stunt inadequate to responding to a pandemic that has killed nearly 190,000 Americans – more than in any other country in the world. More than 6.3 million Americans have been infected by the novel coronavirus, with millions thrown out of work as the economy contracted.

“Senate Republicans appear dead-set on another bill which doesn’t come close to addressing the problems and is headed nowhere,” Pelosi and Senate Democratic leader Chuck Schumer said in a statement.

The latest Republican bill would be augmented by some unspent funding from the CARES Act, which was enacted at the end of March, according to aides who asked not to be identified.

It would provide a $300-per-week federal unemployment benefit, down from a $600-per-week provision that expired weeks ago. McConnell also said it would set a second round of loans that can turn into grants for small businesses struggling through the pandemic, along with aid for schools and medical supplies.

Businesses would also get new protections against lawsuits as they reopen as the number of COVID-19 cases and deaths rise.

The bill currently being considered would not provide the billions of dollars in aid that U.S. airlines, struggling through the pandemic, had lobbied for, according to two congressional aides.

Democrats dismissed the proposal as an “emaciated” bill that they said was designed to simply provide political cover to Republican senators in tough re-election campaigns this year, instead of a bill that could be enacted into law.

Republican aides said the bill includes $10 billion for the U.S. Postal Service, which is girding for a large number of mail-in ballots for the Nov. 3 elections as a result of people fearful of voting in person because of the virus.

The House has approved $25 billion for the Postal Service.

White House Chief of Staff Mark Meadows said he was hopeful there would be another round of stimulus funding before Election Day.

Meadows told Fox Business Network he hoped legislation put forward by Senate Republicans would provide a basis for a future agreement and that negotiations were ongoing.