The vote capped a brazen feat for Republicans, who pushed through a Supreme Court nominee in little more than five weeks with the election looming. 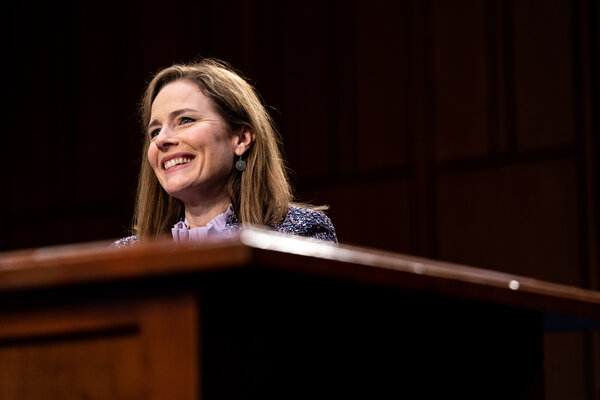 WASHINGTON — Judge Amy Coney Barrett, a conservative appeals court judge and protégée of former Justice Antonin Scalia, was confirmed on Monday to the Supreme Court, capping a lightning-fast Senate approval that handed President Trump a victory ahead of the election and promised to tip the court to the right for years to come.

Inside a Capitol mostly emptied by the resurgent coronavirus pandemic and an election looming in eight days, Republicans overcame unanimous opposition by Democrats to make Judge Barrett the 115th justice of the Supreme Court and the fifth woman ever to sit on its bench. In a 52-to-48 vote, all but one Republican, Susan Collins of Maine, who herself is battling for re-election, supported her.

It was the first time in 151 years that a justice was confirmed without a single vote from the minority party, a sign of how bitter Washington’s decades-old war over judicial nominations has become. The vote concluded a brazen drive by Republicans, who moved to fill the vacancy created by the death of Justice Ruth Bader Ginsburg just six weeks before the election. They shredded their own past pronouncements and bypassed rules in the process, even as they stared down the potential loss of the White House and the Senate.

Democrats called it a hypocritical power grab by Republicans who should have waited for voters to have their say on Election Day. They warned of a disastrous precedent that would draw retaliation should they win power, and in a last-ditch act of protest, they unsuccessfully tried to force the Senate to adjourn.

Republicans said it was their right as the majority party and exulted in their win. With Judge Barrett’s elevation in place of Justice Ginsburg, a liberal icon, the court is expected to tilt decisively to the right. It is gaining a conservative who could sway cases in every area of American life, including abortion rights, gay rights, business regulation and the environment.

Her impact could be felt right away. There are major election disputes awaiting immediate action by the Supreme Court from the battleground states of North Carolina and Pennsylvania. Both concern the date by which absentee ballots may be accepted.

Soon after, Judge Barrett will quickly confront a docket studded with major cases on Mr. Trump’s programs and policies, not to mention a potential challenge to the election results that the president had cited as a reason he needed a full complement of justices before Nov. 3. Coming up quickly are challenges related to the Affordable Care Act, signature Trump administration immigration plans, the rights of same-sex couples and the census.

The court is also slated to act soon on a last-ditch attempt from Mr. Trump’s personal lawyers to block the release of his financial records to a grand jury in Manhattan. 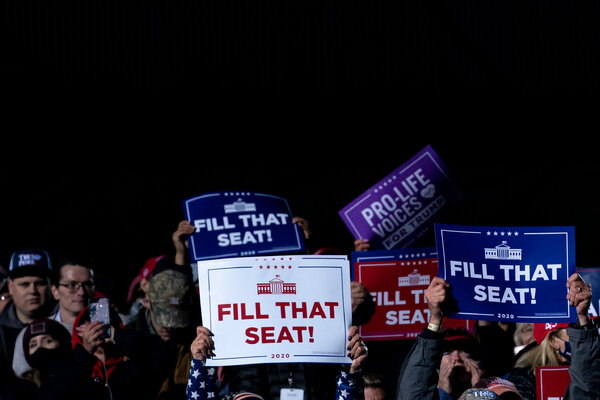 No Supreme Court justice is a certain vote, and Judge Barrett pledged during her confirmation hearings to be an independent mind. But she is widely viewed by both parties as a judge in the mold of Justice Scalia, her mentor, who would rule consistently in favor of conservative positions.

Neither her academic writing nor her relatively brief three-year stint on a federal appeals court provides strong evidence of how she would approach the wide array of cases that will come before her. She gave little hint during her hearings of how she regards any major issue, but she did earlier criticize Chief Justice John G. Roberts Jr. for voting to uphold the Affordable Care Act, and she once signed onto an ad calling for overturning Roe v. Wade and its “barbaric legacy.” It is a good bet that she will be among the court’s most conservative justices, probably to the right of Chief Justice Roberts and Justice Brett M. Kavanaugh.