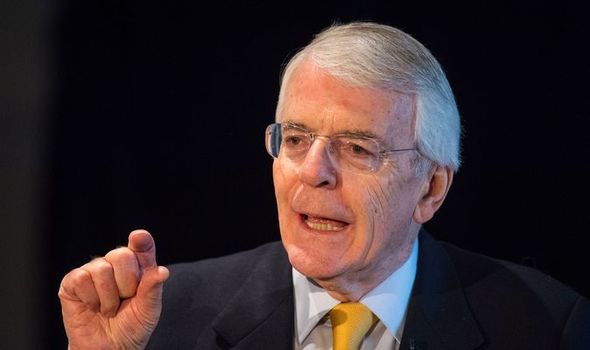 In an extraordinary attack, Sir John said the Government’s actions were “shameful, wrong and unworthy” and suggested its treatment of the Commons was “perhaps politically corrupt”. MPs are furious that on Wednesday they were ordered to vote for an amendment which blocked the Commons standards committee’s recommendation that Mr Paterson be suspended for 30 days for bringing the House into disrepute through his lobbying activities. It instead called for an overhaul of the watchdog.

The Government U-turned a day later in the wake of widespread outcry and Mr Paterson resigned as an MP.

Sir John said: “Sleaze is unacceptable, was unacceptable when I was there, and I suffered a great deal of pain and anguish over it. It’s unacceptable today and it needs to be stopped.”

“He told Radio 4’s Today programme: “There is a general whiff of ‘we are the masters now’ about their behaviour. I have been a Conservative all my life and if I am concerned at how the Government is behaving I suspect lots of other people are as well. It seems much of what they are doing is un-Conservative in its behaviour.”

He added: “The way the Government handled that was shameful, wrong and unworthy of this or indeed any government. It also had the effect of trashing the reputation of Parliament.”

And it has also hit Mr Johnson’s approval figures, which slumped to the lowest level on record. The PM’s personal ratings have now fallen to -20, down from -16 last week, while the Tory lead has also fallen to a single point in the past week, an Opinium poll for the Observer found.

But Mr Johnson is still regarded as the best prime minister candidate with 28 per cent of voters, down five points, with the Labour leader, Sir Keir Starmer, on 26 per cent, up four points.

Sir John, whose government in the 1990s was undermined by sleaze, said: “When that happened I set up the Nolan Committee on Standards in Public Life to stop it, which has been a huge success.

He went on: “The Government, with its over-large majority, tends to treat Parliament with contempt. And if that continues, it will end badly. They bypass Parliament at will and the Speaker has expressed his frustration about that on many occasions, and rightly so. But they also behaved badly in other ways that are perhaps politically corrupt.”

A Conservative backbencher said they had ended up with the “worst of all worlds” with the Government “outmanoeuvred” by Labour and Mr Paterson forced to resign. Chief Whip Mark Spencer is now in the firing line over the fiasco with Leader of the Commons Jacob Rees-Mogg also under pressure.

A former minister said: “I am surprised the Chief Whip and the Leader of the House haven’t been sacked.

“This is a complete disaster and totally unnecessary.” Another Tory MP who won a “Red Wall” seat formerly held by Labour said: “We are all seething. This could not have been handled any worse.”

However, a Conservative MP argued it is No 10 that needs a “reality check”, saying: “Ultimately the buck stops with Boris. He’s the Prime Minister.” And a further Conservative MP defended Mr Rees- Mogg, saying: “People think Jacob was the person sent out to sell it rather than the person who really cooked it up.”

Andrew Bridgen, Tory MP for North West Leicestershire, had advice for the Prime Minister. He said: “He clearly needs a wider team of advisers, more grounded in their constituencies and in tune with mainstream public opinion.”

Lee Anderson, who took the Nottinghamshire seat of Ashfield from Labour in 2019, said the events of last week had left a “bitter taste” in his mouth.

He said he voted for the amendment “not to save Owen Paterson’s skin” but because he believed everybody should have the right to an appeal. Mr Anderson said he thought the findings of the standards committees were “probably right”.

Mr Anderson added: “MPs are paid handsomely and if they don’t earn enough in the four days a week they are in London then I strongly suggest that in the other three days they get a job driving lorries.”

He added: “I don’t want to see Parliament full of greedy, self-serving politicians that think it’s OK to take a big salary for being an MP and take other salaries whilst having little thought for their own constituents and their needs.”

Another backbench MP said: “I think everybody has a lot of personal sympathy ‘The buck stops with the Prime Minister’ for Owen but the idea they’d march us up the hill on this is just crazy. And it’s a big, big problem the Government has now because it’s just lost all credibility among the backbenchers.”

The MP claimed Mr Johnson “is surrounded by sycophants rather than people prepared to tell him tough things, which is really dangerous for the Prime Minister”.

A first-term Conservative MP urged Mr Johnson to “listen to your sensible new backbenchers who speak to people in marginal constituencies” instead of paying attention to the advice of “old fossils”.

The MP stressed that Mr Johnson was “still loved” by the public but that he needs to “go out and speak to ordinary people”.

However, New Forest West Conservative MP Sir Desmond Swayne insisted MPs were within their rights to challenge the recommendations of the standards committee’sand push for reform. He said the Government’shad made a great mistake by whipping MPs to back the amendment but argued the system must be overhauled.

He said. “This kangaroo court has got to be sorted out so there is a proper procedure and a proper appeal procedure.”