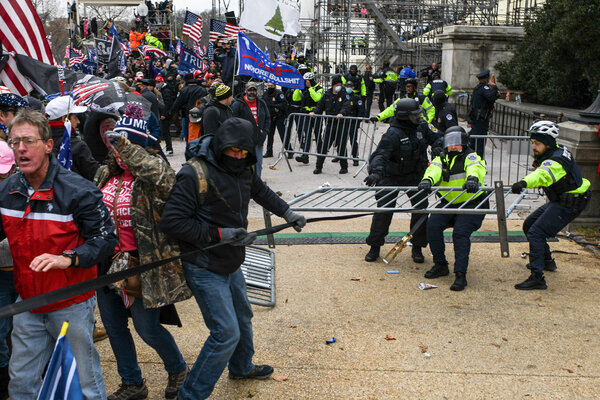 President Biden issued a statement on Tuesday recognizing the six-month mark of the Jan. 6 riot at the Capitol, declaring that even after the deadliest attack on Congress in centuries, the tenets of democratic society remained secure.

The president said the riot had “posed an existential crisis and a test of whether our democracy could survive.”

“While it shocked and saddened the nation and the world, six months later, we can say unequivocally that democracy did prevail — and that we must all continue the work to protect and preserve it,” he said.

In addition to condemning the actions of the rioters, Mr. Biden honored the members of the United States Capitol Police who died during or after the attack.

“On this day, Jill and I send our condolences again to the families of the U.S. Capitol Police officers who lost their lives or suffered severely in defense of our democracy,” he said.

The president’s statement came on the heels of efforts by Democrats in Congress to investigate what led to the riot and by the Capitol Police to increase security.

Voting nearly along party lines, the House moved last week to create a 13-member select committee to examine “the facts, circumstances and causes relating to the Jan. 6, 2021, domestic terrorist attack.”

On Tuesday, the Capitol Police announced that they would begin opening field offices outside Washington to help monitor threats against lawmakers.

On social media on Tuesday, people who were trapped inside the Capitol building as rioters broke through the doors on Jan. 6, including some journalists and members of Congress, shared photos and memories of their experiences.

“On January 6th, I didn’t know if I’d make it out of the Capitol alive,” Representative Pramila Jayapal, Democrat of Washington, said on Twitter.

While Mr. Biden’s statement was a forceful rebuke of the rioters and political extremism in general, he also urged Americans to set aside political differences.

“We are the United States of America,” he said, “and over the last few months we have shown what we can do when we come together — beat a deadly virus, get our economy going again, and prove that democracy can deliver for the people.”