Kay Burley repeatedly asked Mr Philp whether he had drafted a paper suggesting abolishing the top tax rate would be a good inclusion in Kwasi Kwarteng’s financial plan. The proposal sparked a furious backlash from backbenchers, who joined in public criticism over the unfairness of the move amidst the ongoing cost of living crisis. Ms Burley spent two minutes challenging the Chief Secretary to confirm he had proposed the policy, with Mr Philp squirming as he insisted he would not disclose details of private Cabinet meetings.

The Sky News host said: “Did you present the Chancellor and the would-be Prime Minister with a paper outlining this would be a good idea during the election campaign for the new Prime Minister?”

Mr Philp insisted several plans had been discussed and looked at but did not deny a paper had been specifically drafted on the 45p tax rate change.

Mr Burley asked once again: “Did you or did you not present them with a paper saying this was a good idea?”

The top Treasury chief said: “I’m not going to go into the details of what ideas were or were not discussed by Cabinet because those are private conversations, Kay. And what I’m interested in talking about is the growth plan that is going to see wages rising.” 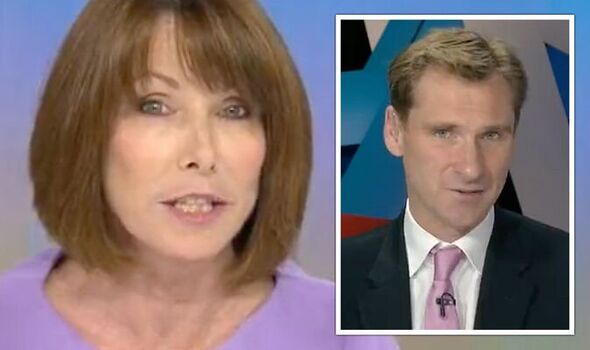 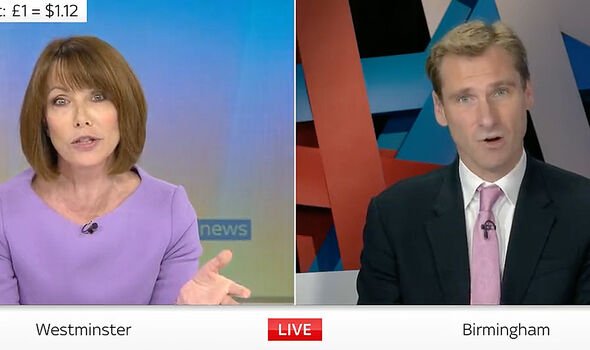 The broadcaster insisted: “It impacts on the country. You’re a public servant, was it your idea?”

Mr Philp hit back: “I would not describe it as my idea, no. But we discussed lots of ideas. I discussed those ideas, I was asked to analyse different ideas, we discussed dozens and dozens of different things that were discussed with me, with lots and lots of other people.

“We put together the growth plan which will get out economy growing, we will see wages rising, and it will see a sustainable tax base develop from public services.”

An increasingly frustrated Ms Kay said: “You’ve said that, Mr Philp. Did you present Ms Truss and Mr Kwartent with a paper suggesting this is what would happen if there was a cut from 45p to 40p?” 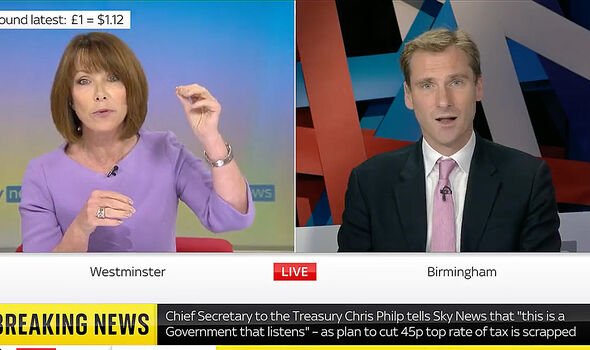 The Tory MP ultimately responded, saying he had not created a paper “specifically” focussed on the change to the top tier tax rate.

But Ms Burley persisted: “I’m sure that’s the case but, nevertheless, it’s my job to press you on it. And my question is, as part of a paper, as part of a body of work that was given to them during the election campaign, did you suggest in writing that this could be a good idea?”

Mr Philp replied: “I’m not going to go any further into private discussions that were held over the summer. I said as much as I want to say about this.”

The Sky News presenter simply added: “So you did.”

If Labour really has a 33-point lead, the Tories face total wipeout [INSIGHT]
Truss crisis as poll shows under-45s think Labour is more patriotic [REVEAL]
Have your say on whether Chancellor should cut tax for highest earners [REACT]

Confirming his decision to U-turn on the tax rate drop, Mr Kwarteng said he was making the U-turn “in a spirit of contrition and humility” because scrapping the 45p tax rate “doesn’t make sense”.

He told LBC Radio that other parts of the growth package had been welcomed but “there is this one element, which is the 45p rate, which was, I accept, controversial” and “people have said they don’t like it”.

He added: “I’m listening, and I get it, and in a spirit of contrition and humility I have said ‘actually this doesn’t make sense, we won’t go ahead with the abolition of the rate’.”