Home » Politics » ‘SNP are treating the north of England with contempt!’ Andy Burnham furious at Sturgeon

The Manchester Mayor Andy Burnham was furious in his assessment of Nicola Sturgeon during this morning BBC’s The Andrew Marr Show, hosted by Nick Robinson. A furious Mr Burnham ripped into the Scottish First Minister after she imposed a travel ban between Scotland and Manchester on Friday. He called on the SNP to pay up compensation “for the individuals who might lose holidays and companies who lose bookings”.

Mr Burnham told the BBC: “We need to be careful about the way we manage things going forward.

“I was really disappointed on Friday that the First Minister of Scotland announced out of the blue a travel ban, saying people in Scotland couldn’t travel to Manchester and Salford, and the other way around too.

“That is exactly what the SNP always cause the Westminster Government of doing. Just riding roughshod over people.

“The SNP are treating the north of England with the same contempt in bringing that in without any consultation.” 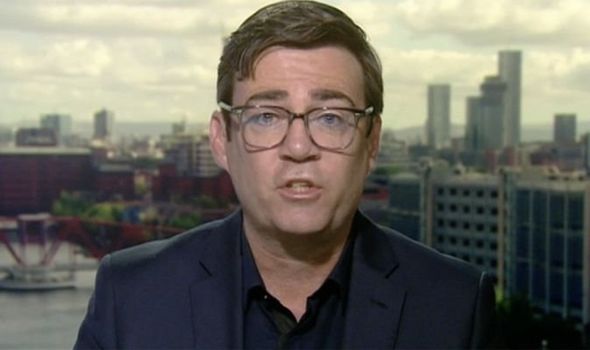 Mr Robinson said Mr Burnahm must have been “not just disappointed but furious” when he heard the news of the ban.

The Labour Mayor responded: “I think it’s double standards. It’s hypocrisy. They have done to us exactly what they always complain the UK does to Scotland.

“I will be writing to the First Minister today, asking for compensation for the individuals who might lose holidays and companies who lose bookings.

“You can’t just impose these things on parts of the north of England without any discussions with us.”

He went on to call on the SNP government “to live by the same standards they demand of others”.

“Says he is going to be demanding compensation for those who have been denied their holidays by the Scots Nats tactics.”

On Friday, Ms Sturgeon announced non-essential travel to the English city was no longer allowed due to a rise in the number of Covid-19 cases.