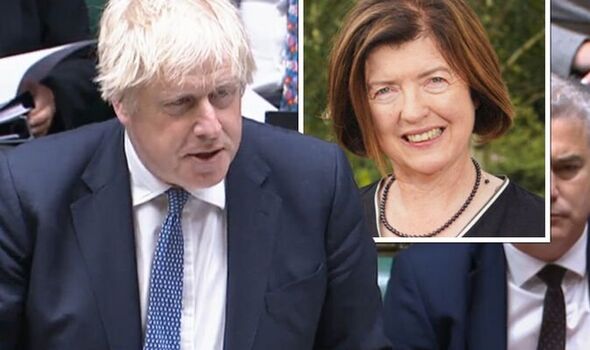 She is expected to be highly critical of the culture in No10 and will name senior individuals who she believes are responsible for the rule-breaking that has damaged Downing Street’s reputation with the British public.

Pictures of the rule-breaking events are also expected to be made public.

Some images have already been leaked, with ITV News publishing pictures which showed Mr Johnson raising a toast and drinking wine at a gathering held to mark the departure of former spin doctor Lee Cain on November 13 2020.

The photographs sparked anger among some Conservative MPs who fear backlash from voters over the evidence.

The report in full will be published on the Government website for anyone to read.

Mr Johnson will give a statement in the House of Commons on the findings of Ms Gray’s report now this afternoon after PMQs.

He is then considering holding a press conference to apologise to the nation for the behaviour at the heart of Government.

Later this evening, he will then address the 1922 Committee of backbench Tory MPs who will have to decide whether the findings are sufficiently serious to warrant a push to oust him.

The senior civil servant was asked to take over the probe into the actions of those in No10 after the Cabinet Secretary, Simon Case, was forced to recuse himself due to claims his office had also taken part in illegal gatherings during the pandemic.

Ms Gray was ready to publish her findings in the last week of January but was forced to hold back her report after the Met Police launched their own investigation into the events in Downing Street.

Instead, she published a summary of her findings in which she criticised “failures of leadership and judgment by different parts of No 10 and the Cabinet Office at different times”.

The police inquiry concluded last week, clearing the way for the publication of the official’s full findings.

A total of 83 people received at least one fixed-penalty notice (FPN) each from the police for attending events over eight separate days.

Prime Minister Boris Johnson received just one fine, for his 56th birthday gathering in June 2020 when indoor mixing was banned, along with his wife Carrie Johnson and Chancellor Rishi Sunak.

Mr Johnson has already apologised for the small rule breach and said he was fully focused on getting on with his job.

“I have paid the fine and I once again offer a full apology,” he said after being issued with the FPN.

“I want to be able to get on and deliver the mandate that I have, but also to tackle the problems that the country must face right now.”