Home » Politics » The Two Parties Finally Agree on Something: American Democracy Is in Danger 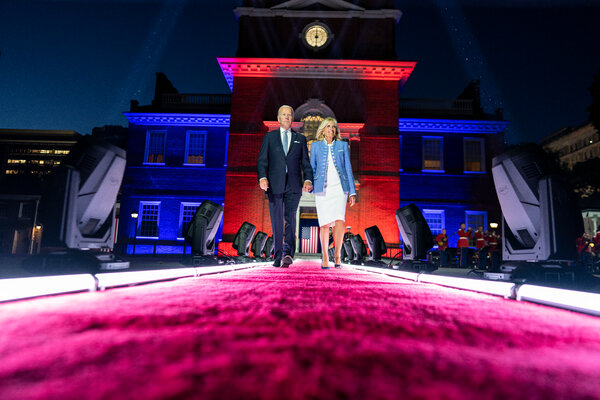 WASHINGTON — The good news is that deeply divided Americans agree on at least one thing. The bad news is they share the view that their nearly two-and-a-half-century-old democracy is in danger — and disagree drastically about who is threatening it.

In a remarkable consensus, a new Quinnipiac University poll found that 69 percent of Democrats and 69 percent of Republicans say that democracy is “in danger of collapse.” But one side blames former President Donald J. Trump and his “MAGA Republicans” while the other fingers President Biden and the “socialist Democrats.”

So when the president delivers a warning about the fate of democracy as he did on Thursday night, the public hears two vastly different messages, underscoring deep rifts in American society that make it an almost ungovernable moment in the nation’s history. Not only do Americans diverge sharply over important issues like abortion, immigration and the economy, they see the world in fundamentally different and incompatible ways.

“Sadly, we have gotten away from a common understanding that democracy is a process and does not necessarily guarantee the results your side wants, that even if your team loses an election, you can fight for your policies another day,” said Michael Abramowitz, the president of Freedom House, a group that promotes democracy globally and recently has expressed concern for it at home as well. “That’s a huge challenge for the president, but also for all politicians.”

The chasm between these two Americas makes Mr. Biden’s task all the more pronounced. While he once aspired to bridge that divide after he evicted Mr. Trump from the Oval Office, Mr. Biden has been surprised, according to advisers, at just how enduring his predecessor’s grip on the Republican Party has been.

And so, instead of bringing Americans together, the president’s goal has essentially evolved into making sure that the majority of the country that opposes Mr. Trump is fully alert to the threat that the former president still poses — and energized or scared enough to do something about it, most immediately in the upcoming midterm elections.

That calculation meant that Mr. Biden knew he would be hit for abandoning his stance as the president who would unite the country. With the legislative season basically over pending the election, he no longer needed to worry about offending Republican members of Congress he might need to pass bipartisan bills. Instead, he has communicated with voters much as he did in 2020, reaching out especially to suburban women and other key groups in swing states like Pennsylvania.

The Republicans’ reaction to Mr. Biden’s speech was remarkable. For years, they stood quietly by as Mr. Trump vilified and demonized anyone who disagreed with him — encouraging supporters to beat up protesters; demanding that his rivals be arrested; accusing critics of treason and even murder; calling opponents “fascists”; and retweeting a supporter saying “the only good Democrat is a dead Democrat.” But they rose up as one on Thursday night and Friday to complain that Mr. Biden was the one being divisive.

Aided by an eerie red speech backdrop, Republicans described Mr. Biden in dictatorial terms, as “if Mussolini and Hitler got together,” as Donald Trump Jr. put it.

When it comes to democracy in America, there is no real equivalence, of course. The elder Mr. Trump sought to use the power of his office to overturn a democratic election, pressuring state and local officials, the Justice Department, members of Congress and his own vice president to disregard the will of the people to keep him in office. When that did not work, he riled up a crowd that stormed the Capitol, disrupting the counting of Electoral College votes and threatening to execute those standing in Mr. Trump’s way.

Since leaving office, Mr. Trump has continued to demand that the election be reversed and even suggested that he be reinstated as president, all based on lies he tells his supporters about what happened in 2020. He has forced Republican officeholders and candidates to embrace his false claims and sought to install election deniers in state positions where they can influence future vote counts.

When Mr. Trump’s supporters express fear for democracy with pollsters, it is not about those actions but about what Mr. Trump has told them about election integrity, even if what he says is wrong. They also see Mr. Biden’s administration as far too liberal, expanding government to the point that it will invariably restrain their own freedoms.