Surprise victories in the Midwest catapulted President Trump to victory four years ago, and the region again looms as the critical battleground. Both candidates are focusing on it in the final days. 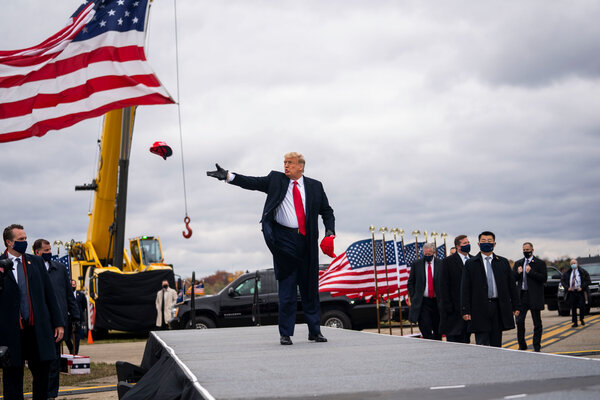 By Thomas Kaplan and Annie Karni

DES MOINES — President Trump stunned the political universe in 2016 with a sweep of critical Northern swing states, winning Michigan, Pennsylvania and Wisconsin by less than one percentage point and forcing Democrats into four years of soul-searching about what went wrong in their historic geographic base.

Four years later, the chilly Midwest looms again as the principal battleground of the election, and on Friday Mr. Trump and former Vice President Joseph R. Biden Jr. crisscrossed the region campaigning in states that are not only must-win for the president but also central to the identities of both parties.

For Democrats, their blue wall in the Midwest was for years their only defense against the Republican Party’s stronghold in the South, a demonstration that they were still the party of labor, working-class families and predominantly Black urban centers. For Republicans, these states are a key part of their rural base, and Mr. Trump has made his pitch to farmers and white working-class voters here.

As the country reported a record number of coronavirus cases in the past week, Mr. Trump continued to insist on Friday that the disease the virus causes was not serious. At a rally in Michigan, a state that reported a 91 percent increase in new cases from the average two weeks earlier, he made the extraordinary and unfounded accusation that American doctors were profiteering from coronavirus deaths, claiming they were paid more if patients die. He also mocked Laura Ingraham, the Fox News host who attended the rally, for wearing a mask. “I’ve never seen her in a mask,” he said. “Laura, she’s being very politically correct.”

Mr. Biden, in Iowa, took the opposite approach, pointing out the record number of new cases in the state and noting that the Iowa State Fair had been canceled this year for the first time since World War II. “And Donald Trump has given up,” Mr. Biden said. 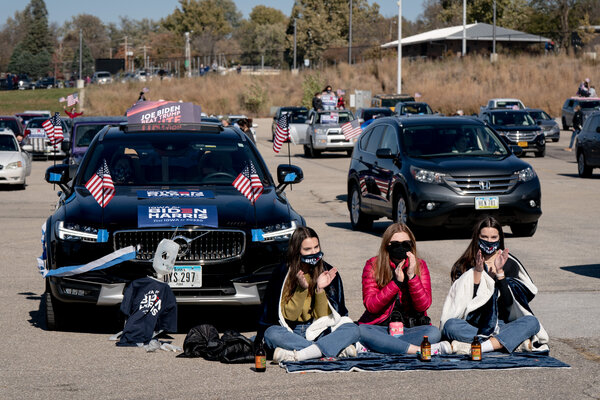 Later in Minnesota, Mr. Biden lashed Mr. Trump for his comment about doctors profiting from virus deaths. “Doctors and nurses go to work every day to save lives,” he said. “They do their jobs. Donald Trump should stop attacking them and do his job.”

If Round 1 of election night will be fought in the Sun Belt — in Southeastern states like Florida, North Carolina and Georgia — Round 2 will be fought in Pennsylvania and the Midwest. Trailing in most polls and with an increasingly narrow path to victory, Mr. Trump has been forced to hold a series of large rallies in states he cannot afford to lose.

That pressure was reflected in the Trump campaign’s last dash, beginning with stops in Michigan, Wisconsin and Minnesota on Friday. Just before Mr. Trump took the stage at his first rally in Waterford Township, Mich., dressed in a black overcoat and black leather gloves, his campaign announced that he would be back in the state for two more rallies on Monday, with additional stops in Wisconsin and Pennsylvania the same day.

“He’s sort of trying to repeat the 2016 playbook,” said Charles Franklin, director of the Marquette Law School poll. “He’s coming back to these three states. He did that effectively, surprised us all, and won with that strategy.”