Even as Nancy Pelosi and Steven Mnuchin continued to narrow their differences, the president said Democrats were holding out for too much, suggesting he was preparing to blame them for the demise of a deal. 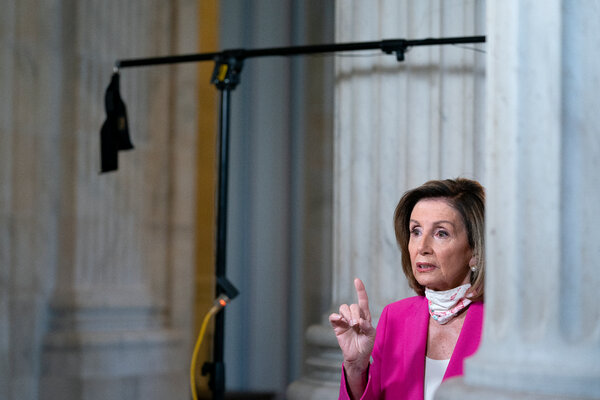 WASHINGTON — President Trump cast doubt on Wednesday on the prospects of a bipartisan, multitrillion-dollar stimulus deal before Election Day, as Senate Republicans continued to balk at an emerging compromise they called too costly and politically fraught.

Even as Speaker Nancy Pelosi of California and top White House officials said that they were continuing to narrow their differences on a plan to help Americans and businesses struggling amid the pandemic, Mr. Trump appeared to be reverting to a familiar pattern, preparing to blame Democrats for the demise of a compromise.

“Just don’t see any way Nancy Pelosi and Cryin’ Chuck Schumer will be willing to do what is right for our great American workers, or our wonderful USA itself, on Stimulus,” the president wrote on Twitter. “Their primary focus is BAILING OUT poorly run (and high crime) Democrat cities and states.”

He appeared to be referring to a sticking point in the talks over aid to state and local governments. Democrats are insisting on providing $500 billion, while the White House has offered half of that amount.

Yet Republicans presented an additional obstacle to the enactment of a relief measure. Mr. Trump’s tweet came not long after Mark Meadows, his chief of staff, returned to the White House after a lunch meeting with Republican senators, who continued to balk at the administration’s willingness to offer to costly concessions to Ms. Pelosi in the interest of securing an economic recovery deal before Nov. 3.

Mr. Meadows said that the Republicans had grown suspicious of Ms. Pelosi’s tactics and were “starting to get to a point where they believe that she is not negotiating in a fair and equitable manner.”

Later, a nearly one-hour conversation between Ms. Pelosi and Steven Mnuchin, the Treasury secretary, brought the pair “closer to being able to put pen to paper to write legislation,” a spokesman for Ms. Pelosi said, and Mr. Meadows had said earlier in the day that he was “still very hopeful and very optimistic that we’re making progress.”